Home > Access to and control of resources > Recovery with rights: Towards an economy that cares

Recovery with rights: Towards an economy that cares 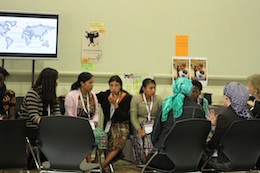 The global financial crisis led to greater job loss and poverty among women than men while rising food prices and responsibility for social reproduction take excessive tolls on the livelihoods of women.

Financial crises and austerity measures to combat crises undermine the human rights to work, education, health and nourishment and the capacity to provide care and social reproduction. Their consequences are particularly acute for women who are held responsible for reproduction and face unequal gender relations that function to deny them access to resources and opportunities. Regulation and recovery must therefore be rooted in a human rights based approach taking special note of women’s rights and impacts on social reproduction.

Issue No. 6 of a series of primers prepared by the “A bottom up approach to righting financial regulation initiative” argues that financial crises and austerity measures undermine human rights and the ability to offer support for those in need. Reflecting on the problem from a gender perspective the report explains how the consequences of economic decay adversely impact women in particular and, therefore, regulation and recovery must take women’s rights and concerns into account. It argues that recovery measures must include stimulus spending to create jobs and maintain social reproduction, but also make special provisions for women, especially poor single mothers who are especially vulnerable.

The 2008-09 crisis led to greater job loss and poverty among women than men. US national unemployment was 10 per cent by September 2010, but in several US counties it was as high as 20 per cent. Although manufacturing jobs that are typically “male” such as in automobiles were the first to be hit during the crisis, layoffs in teaching, nursing, the public sector, etc, meant that women’s jobs were not growing as fast during the recovery.  Similar patterns were observable in Greece, Italy, Spain, Portugal and the UK where female unemployment rates were much higher. As jobless persons are 6 times more likely to be poor than working people, women have higher poverty ratios than men. A third of all single female headed households in the US were poor compared to 16 and 6 percent of single male headed households and  married couple families respectively.

Similar impacts were visible in the South. With the deepening recession, export and remittances earnings fell throughout the late 2000s increasing job losses and vulnerability to poverty. Korean women were laid off at seven times the rate that men were in labor intensive export oriented manufacturing. For Indian women who work from their homes, sharp declines in piece rates and opportunities for informal work were observed. In the Philippines, where 9 per cent of the GDP comes from remittances and 70% of the international migrants are women, transfers from abroad not only shore up the balance of payments but also contributed to nearly a third of the decline in poverty ratios in the early 2000s.   Job and remittance losses, even from informal, precarious sources, will constrain incomes for poor women and hence also for their families.

Financial and food crises also entail risks for women as direct care-givers. Women typically prepare meals, even grow, prepare and procure food in their households, besides feeding children. Food procurement is highly constrained with livelihood loss. Additionally, the double-digit food price inflation observed in several developing countries directly impairs women’s ability to provide food with several implications.   Several case studies illustrate women’s tendency to cut back their own food shares in lean times to feed the men and (male) children, or the increased risk of violence that women face from husbands with poor access to food and uncertainty. Amidst declining real incomes, coping strategies include girls being pulled out of schools to help their mothers, and enable their brothers’ education.

Human rights to work, education, health and adequate nourishment are inextricably linked to ending discrimination and unequal gender relations. The social construction of women as care-givers and men as bread-winners is particularly pernicious for human rights. Such norms shape perceptions of women as secondary earners and possessing specific skills and attributes to justify their poorer earnings and position in the labor market compared to men. In OECD countries women are 5 to 15 times more likely to be in relatively poorer-paid occupations such as primary and secondary education, midwifery and nursing secretarial work, personal care-giving etc. In Asia, just as stereotypes of women as obedient, docile and possessing “nimble fingers” shapes demand for their labor in export oriented manufacturing, their relative lack of mobilization and unionization makes it simpler to cut their wages or fire them. Moreover, women’s care-giving responsibilities make them prefer home-based work and hence they become a cheap, flexible, home-based labor force that does not threaten patriarchal hierarchies.

Regardless of context, care-giving and social reproduction are perceived and treated as exclusively feminine responsibilities. Social reproduction, which includes biological reproduction, daily and long-term care including the socialization of human beings, is vital to any society. Those who perform social reproduction yield positive externalities in form of healthy, and well-adjusted children, workers and citizens. Yet, women face systematic wage penalties for labor market breaks to have and raise children, and maintain work-family balance. Even fathers face a penalty if they are not-white, though these are lower than those faced by mothers. Besides, women work longer hours with less time for leisure and sleep, and face increased risks of under-nourishment, health shocks and violence during economic crises.Single mothers are particularly vulnerable partly due to poorer earning capacities, and the high time constraints entailed in being the sole care-giver.

Recovery for Rights and Social Reproduction

Social reproduction is a public good that needs protection especially during hardship. Public spending cuts limit public provision of food, health care, education and work, constraining social reproduction. Interest rate hikes and regressive taxes also limit private spending. These measures diminish real incomes and quality of life of all people, but also place a greater burden on women who work hard to make up the difference. In contrast fiscal spending can ease such burdens. For instance, the American stimulus package extended unemployment insurance to workers who leave jobs to care for ill/disabled family members, domestic and part-time workers (most of whom are women). In India, public employment is guaranteed to every rural household that is within 5 km of residence with adequate child care facilities. However, several states in both countries are yet to put these in practice.

It is vital that recovery measures take the form of stimulus spending to create jobs and maintain social reproduction, but also make special provisions for women, especially poor single mothers. Financial taxes and levies, such as the financial transaction tax, can finance such spending while also complementing other regulations of the financial sector. Such measures can be guided by the provisions of CEDAW which outlines policy directions to eliminate gender discrimination.

This issue was written by Avanti Mukherjee, a researcher associated with Development Alternatives with Women for a New Era -DAWN.
Source: RightingFinance.

Boushey, Heather 2011. The End of the Mancession, (available at http://www.slate.com/articles/double_x/doublex/2011/01/the_end_of_the_mancession.html).

Seguino, Stephanie 2009. The Global Economic Crisis, Its Gender implications and Policy Reponses, March 5, Fifty- Third Session of the Commission on the Status of Women, United Nations.

Food inflation in several parts of developing Asia was around 30 per cent or higher in 2009 as compared to 2007. Countries such as Afghanistan, and Pakistan faced wheat price rises to the tune of 114% and 84% respectively. See Ghosh, Jayati 2010. The unnatural coupling: Food and Global finance, Journal of Agrarian Change, 10(1) January, 72-86; Also see Ghosh, Jayati. The Impact of Crisis on Women in Developing Asia, for gendered implications.

Caliari, Aldo; Schoenstein, Anne; Balakrishnan, Radhika; and Lusiani, Nicholas 2010. Bringing Human Rights to Bear in Times of Crisis: A human rights analysis of government responses to the economic crisis, Submission to the High-Level Segment of the 13th session of the United Nations Human Rights Council on the Global Economic and Financial Crises.

Hodges, Melissa and Budig, Michelle 2010. Who Gets the Daddy Bonus?: Organizational Hegemonic Masculinity and the Impact of Fatherhood on Earnings, Gender and Society 24 (6) December, 717-745.