The structural problem of misogyny 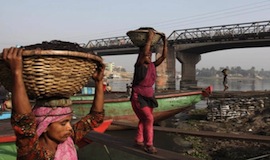 New feminism should stand together with the new proletariats against female exploitation and violence. It is time to recognise the struggle to control women’s bodies in all forms as deeply politically misogynist even if there is no easy way to mobilise and collectivise this effort writes feminist Zillah Eisenstein*.

The world seems upside down – the 1 percent turns most of our lives towards their benefit. Truth tellers go to jail; liars go free; secrecy trumps democracy; the World Health Organisation declares that violence against women is an “epidemic global health problem”; girls and women hold up not half the sky, but the whole thing as they do the lion’s share of labour; Julian Assange demands transparency from governments while progressives simply forget that he is accused of rape; right-wing activists attack women’s rights to her body, especially to abortion while denying real choices to children everywhere.

So much is changing about everything: the globe, the earth, weather, jobs, classes, races, genders and sexes. Because women’s lives are changing, and everywhere, feminisms also need to change.

Enter, the new proletariat(s) – where class structure matters and in new complex ways. So, maybe it is time to retrieve the term proletariat from the “left” and reinvent it for the rest of us progressives. It is time to recognise the struggle to control women’s bodies in all forms – from sexual abuse and rape to the war on abortion to the denial of equal pay – as deeply politically misogynist even if there is no easy way to mobilise and collectivise this effort.

This proletariat of women is named by and for the structural location that one inhabits in the system of labour exchange and enforced abuse and punishment. The “epidemic” that the World Health Organisation names as a global health problem is also more deeply a structural problem of misogyny.

I look at these times and see a new polyglot proletariat, or maybe many proletariats that are uniquely similar, made up of more girls and women of all colours than ever before, alongside the men already there. I am hesitant to try and retrieve the term “proletariat” because it exists with historical constraints. Yet, the idea of multiple, many, or plural proletariats undermines a static usage. I resuscitate “proletariat”, especially for women and girls, with the new and old forms of labour on the globe alongside the new transnational networks that derive from this.

Girls and women do labour of every sort – domestic, peasant, migrant, farming, reproductive, consumer, affective, slave and waged. Birthing – that is actually called labour – is done exclusively by women. The new proletariat(s) embrace the labour of girls and women: from sex workers in all their variety, to migrant female labourers crisscrossing the globe, to women and girls hauling water and gathering wood, to the dagongmei in China’s mind-numbing iPad factories. It is no small point that many of the women and girls in the Congo and Rwanda, who are brutally raped and murdered, are/were out gathering firewood.

The other side of labour’s enormous fountain of profit-making and sustenance is sexual harassment, prostitution, rape and violence. In sum: the sex class, containing women of all races and cultures in all their varieties in terms of both labour and sexual violence, remains a silenced secret in the age of supposed transparency.

Gender keeps morphing. What women do and what they are allowed to do and expected to do keeps changing. A tiny minority of women reaches unbelievable sites of power and wealth. But this should not confuse us. The vast majority of women and girls become and remain the labourers of the globe – the newest proletariat making new proletariats. We might be poor, or middle class, or upper middle class in income – but proletariat nevertheless – relegated to selling our labour for wages or salary.

Four in 10 mothers in the US are primary breadwinners and upwards of 80 percent of women contribute significantly to the economic well-being of their households – yet, they remain poor and one’s colour plays a huge role in it.

The disparate realities of women’s lives today are probably more present than ever. As economic inequality grows – so does the difference among white women and women of other colours. This intensifies as new progress is made for a few, while the majority remains in well-established ghettoes of sorts. It would be a mistake to ignore the change and the progress. And it is a mistake to not recognise what remains problematic and unchanged. And it would be wrong to assume that the change means that the structural limitations of a racialised misogyny do not remain.

Inchoate politics as a pacifier

There are ongoing investigations into sexual abuse and rape in all our military venues. Rape is continuous and serial, and violates men and women. Males, more often, do not come forward to report abuse. Many of these violations are same-sex and rattle the heterosexism of militarist misogyny. However, they also point to the fact that sex and gender are not one and the same. There are more women in the military today – 14.5 percent of the armed services are female – and many of them are working class women, becoming fodder for sexual abuse.

The military ended the draft and became a voluntary army in 1973, the same year that Roe v Wade was decided, making abortion a legal right for women. The affirmation that women had a constitutional right to choose abortion stands alongside the denial of women’s actual sexual rights to their bodies in the military.

I was in Hanoi and in the mountains outside Sapa, where I saw women everywhere doing everything. They are relentless in making their families work. They also remain victims of domestic violence and rape.

The Arab Spring brought new promises for women in Tunisia and Egypt, but now men in the streets are punishing them. Women in Afghanistan demand their education and are brave and tireless, but they are subjected to all sorts of violence, often life threatening. Islamic feminists of all varieties push to democratise Sharia law and challenge patriarchy while there is violent push back against them.

Brazil has a female president and a police chief, and staffs many of its political stations with women, promoting women’s rights. And, yet “public rapes”, especially of poor women, are increasing. Similar truths exist in India. The brutal rape and death of a paramedical student in a moving bus in New Delhi mobilised massive anti-rape demonstrations and revisions of rape law in India and across the globe. Motivated by this, One Billion Rising also activated anti-rape violence demonstrations in more than 270 countries.

There is activism in Guatemala against the murders of women; and the creation of homeless shelters in Haiti, the Philippines and Mogadishu. Sexual violence connects women to their bodies and the body of the globe. Women’s labour – of birthing, rearing, cooking, maintaining life and doing their paid jobs – also connects them. Women in the actual sites of power connect us less.

There are more women in the labour force than ever before in the US, outpacing men. But it says little about equality and is not indicative of a rearrangement of power. It says more about the recession of 2009 and the disproportionate loss of jobs that men, especially working class men, suffered.

These changes are not about feminism or about women’s rights, or about women’s empowerment, even if women use these changes to empower themselves as individuals. All this change of women labourers is about women becoming the largest part of the new working class. Chinese women in the auto factories, in the recent weeks, are demanding higher wages and the right to form a union. They appear to be the backbone of this new class of workers. There are also immigrant women – from the Philippines and the Caribbean – creating a union for women working as nannies in New York.

Modernised misogyny is still misogynist. The privileging of masculinity exists today but with much more economically diverse and diversified forms and expressions. Chattel slavery created all blacks homogeneously as poor, even if there were distinctions of privilege from the manor to the field. Being black today is more economically diversified than in the past. This is true of gender privilege as well. The once traditional white heterosexual married family now exists in much more various forms: single parent families, blended families, gay families, black and Hispanic and Asian families. Violence is still threaded through these forms.

Women in Eastern Europe before the revolutions of 1989 already carried these burdens of the labour force. Women in most African nations have carried more than their share of life’s burdens. Women in China were said to hold up half the sky during Mao’s regime. Women filled the munitions factories during WWII in the US and England.

Yet, still, most women do not get equal pay. They are not promoted as equals either. But there is also something new here. What is new is that this labour is being put more in view, and some females are also doing newly paid labour. Misogyny has more egalitarian forms today without the equality. There is a more diverse range of jobs that females of all colours hold today. This level of differentiation and diversity defines the present global economy. This newest form of patriarchy exists for the benefit of corporate greed and its racialised masculinist privilege. It is not to the benefit of most women or men across the globe. Neither is the sexual violence.

Contrary conditions seem to multiply. Although 80 percent of the displaced and refugees in the conflict in Kyrgyzstan between the Kyrgyz’s and the Uzbeks are women and children, the new president, Roza Otunbayeva, is a female. The greatest penalties for the conflict are women and their children, while a woman oversees the process. Poor women in India, Thailand and Cambodia are a supply for surrogate motherhood – the outsourcing of pregnancy through which women of other classes exploit them. Sakineh Mohammadi Ashtiani is threatened to death by stoning for adultery in Iran, while Hillary Clinton negotiated nuclear issues with Iran’s president. President Jacob Zuma boasts his sexual promiscuity, while women in South Africa suffer rape and HIV/AIDS in devastating numbers.

New feminisms must stand together with the new proletariat(s) against the transnational exploitation and violence towards women and girls. The health of the planet depends on it.

* Zillah Eisenstein has written feminist theory in North America for the past 30 years. She writes in order to engage in political struggles for social justice across the globe. She is an internationally renowned writer and activist and Distinguished Scholar of Anti-Racist Feminist Political Theory at Ithaca College, Ithaca, New York. Her most recent books with Zed Press, London include: The Audacity of Races and Genders (2009); Sexual Decoys, Gender, Race and War (2007); and Against Empire (2004).

The views expressed in this article are the author’s own and do not necessarily reflect Al Jazeera’s editorial policy.