Posted in Labour & Work, The Planet & Ecological Health, The Role of the State on April 17th, 2013 by AWID Staff
Source: Palgrave MacMillan Society for International Development 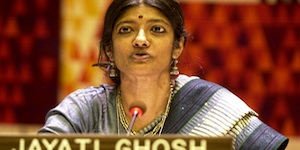 Jayati Ghosh argues it is time for feminists to enter into the discussion of alternatives more forcefully in order to define how economic institutions and policies can ensure a gender-just economy and society.

We have just lived through a phase in which the only grand idea that survived in much of the world seemed to be that of the success of the market as a self-regulating and inherently efficient mechanism for organizing economic life. Now this myth has been comprehensively smashed, and the various fires ranging in global capitalism are no longer susceptible to easy dousing. So people everywhere are thinking much more seriously of alternatives. In several parts of the world this process has already gone quite a long way, as Leftist governments and social movements of different types seek to imagine and create different – more democratic, egalitarian and sustainable – economic arrangements.

It is time for feminists to enter that discussion more forcefully. For too long in the recent past, in most places in the world, we have been essentially reactive: fighting against measures and tendencies (such as fiscal austerity and cuts in public provision of essential infrastructure and social programmes) that would reduce the rights and entitlements of women, suppress their political voice and perpetuate social and cultural patterns that harm both men and women in different ways. But now we need to go beyond this, to create a framework of goals and progressive strategies towards such goals, which in turn would define how economic institutions and policies should evolve for a gender-just economy and society.

What is the woman question now?

This is also important because a changed attitude to the woman question – and associated with this, a more complex understanding of the nature of exploitation – are now more established features of progressive movements in different parts of the world. While women have been part of the working class since the beginning of capitalism, they have often not been widely acknowledged as workers in their own right, even as their unacknowledged and unpaid contribution to social reproduction as well as to many economic activities has always been absolutely essential for the functioning of the system. It took a long time for women’s struggles to be accepted as integral part of working class struggles for a better society. For more than a century, trade unions and other worker organizations tended to be male preserves, based on the ‘male breadwinner’ model of the household in which the husband/father worked outside to earn money, while the wife/mother did not earn outside income and handled domestic work.

It has taken prolonged struggle and determined mobilization to generate greater social recognition of the role of women as wage workers in different forms, as well as to bring out the crucial economic significance of unpaid household and community-based work. The specific social, cultural and political constructions that constrain and mould the lives of women are also better recognized. This is not to say that patriarchy has suddenly disappeared from the ranks of progressive and/or radical organizations and movements – unfortunately, this is clearly a longer struggle. But there is much greater and more serious concern with the ways in which the gender construction of society affects both men and women.

So let us try to imagine the ideal society from a broadly socialist–feminist perspective that is valid for the current times. One possibility is to define it as one in which some things that you cannot control (where you are born, what you are born as, the family into which you are born) do not affect your basic conditions of life (having a secure home; peace and security; access to nutritious food and other basic health; access to education; opportunities for work, leisure, self-expression and social participation). This would not mean putting an end to all social and cultural differences, because after all, that is what makes life interesting. But it would mean that the life chances of a person are not fundamentally determined by the accident of birth.

So someone born, say, as a girl in a family belonging to a minority ethnic group in a rural area of a relatively poor region would still have access to various forms of freedom and minimum conditions of life and opportunities for developing her capabilities, in ways that would not be completely different from those experienced by a boy born in a well-off household of a dominant social group in an affluent society. And these opportunities would not get circumscribed by age, so that older women would also face not entirely dissimilar conditions and opportunities as older men.

What would this require in terms of how we organize our economies and societies?

At the most basic level, it means that economic arrangements should not be oriented around the simple expansion of aggregate incomes and profits as the most significant goals. The continued obsession with GDP as the most important indicator is irrational. It does not measure some crucial aspects that determine well-being and life satisfaction; it typically ignores many results of unpaid labour (which has strong gender dimensions); it does not even capture economic conditions accurately. In fact, it is increasingly less correlated with better material conditions of life, as income growth based on more unequal distribution may not improve the conditions of the poor at all.

So, other goals should be given greater prominence, such as: reasonable living conditions for all, both men and women; development of people’s capabilities and space for their creativity; decent employment opportunities that also seek to reduce the alienation of work; safe and clean environments that do not involve the destruction of nature. Public policy should ensure that access to the essentials of life – food, water, basic housing and amenities, and so on – is not determined by the ‘ability to pay’. Rather, these must be treated as human rights, made available to all in an affordable way.

This involves a different social attitude to markets, not one that seeks to obliterate all commercial activity but rather a recognition of the need for more conscious and explicit roles of socially accountable states in directing, controlling and regulating market activities to ensure that they are compatible with a broader social contract. So, market forces that help in achieving the various goals mentioned here would be encouraged, while those that operate to reduce standards of living and quality of life of ordinary people would be regulated, restricted or even abolished depending on the context. Also, market forces (especially through financial markets) that generate economic instability and volatility must be curbed, and the damage that these create in social life must be prevented or reduced as much as possible.

Another aspect of this is that extreme inequalities should not be tolerated. Systems of taxation and distribution/redistribution of income and wealth, as well as methods of monitoring and regulating pay and other returns, are required to ensure that material differences between people do not growth too large. Social discrimination and exclusion of all kinds would be actively discouraged and sought to be done away with.

All this involves much greater social respect for nature. Among the primary contradictions of contemporary capitalism are the ecological limits that are increasingly evidenced not just by climate change, but by the pollution, degradation, over-extraction and other destruction shown in nature. These have created undeniably unsustainable patterns of production, consumption and accumulation that are generating open conflicts over resources and forcing societies to change, often in undesired ways. Calls for more humane and just societies therefore have to incorporate these critical concerns. Economic activities would be monitored and assessed for the damage they do to nature, with a focus on reducing this as much as possible.

A vision for the future

In this vision, governments would obviously be much more important. So they would have to be more genuinely democratic, transparent and accountable, and adjust policies to changing conditions. There would more people’s voice and participation in the decisions that affect their lives. Governments would respect both the collective rights and concerns of groups and communities as well as the individual rights of all citizens. The specific concerns of women in societies where their political voice is inadequately heard, would be explicitly taken into account.

These can be seen as strategies within individual societies or nations, since much of this is couched in the language of rights that citizens have vis-à-vis the state. But they extend beyond national or even regional boundaries. They require international political and economic arrangements that support the possibility of such societies emerging and surviving, without threats of destabilizing trade and capital flows or military aggression. And they require global collective action for more sustainable economies and greater freedom for all.

So a feminist perspective (unsurprisingly) is really a perspective that suggests goals and strategies that are attractive and desirable for everyone, not just women.