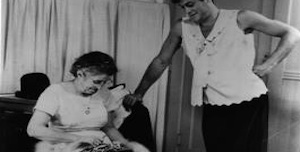 Sex work is work. Trafficking is as an issue of poverty that causes many women to willingly/unwillingly enter into agreements with traffickers because they seek to escape / explore better livelihoods. This session – one of the top ten breakout sessions as voted for by Forum participants – reflected on the evidence base and the experiences of sex worker rights organisations in this area.

A blog by Dr Laura Agustín posted on The Naked Anthropologist highlighting some of the issues raised in the breakout session “Don’t talk to us about sewing machines, talk to us about workers rights” at the 2012 AWID Forum is included below.

Two videos from Don’t Talk to Me About Sewing Machines at the AWID conference in Istanbul recently. The slogan comes from a couple of centuries of social work focused on Rescue and Rehabilitation: First remove the woman from prostitution, then give her alternative employment. Historically, sewing – with or without machines – has been the default alternative, despite the fact that many women have gone into sex work having rejected sewing work. As for sewing lessons, a lot of girls on the planet are still taught to sew as part of their traditional gender upbringing, so the idea that Rescue ladies are required to teach this skill is often ridiculous.

First here is Wi, from Empower, with voiceover in English (at the event she spoke Thai and Liz, also from Empower, translated). I’m putting them here in case they are useful for didactic purposes – like in a classroom. Thank you to Dale from APNSW for these.

Then me at the same session, trying to link my ideas with Kthi Win’s plenary speech an hour earlier and with Wi’s presentation, including the showing of the funny film Last Rescue in Siam (sometimes I feel the Rescue Industry’s proper genre is tragi-comedy). I didn’t speak for 23 hours and 40 minutes, don’t worry.