Changing World Geopolitics and Global Governance: Making sense of the trends, actors and their implications for women’s rights

Posted in Global Governance on March 11th, 2013 by AWID Staff 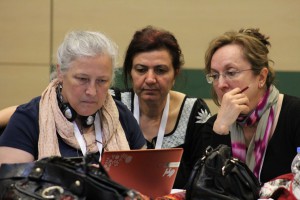 Why and how is global governance relevant to women’s rights and why is it so complex and difficult to talk about in the current world reality? With contributions from key leaders and thinkers this in-depth session shared relevant characteristics of the current global context, exploring for example the connections between how growth is defined and progress is measured, increased militarization and other key phenomena within current global governance arrangements and shifts.

This session looked at some of the actors and institutions (new and old) defining what global governance looks like today. It also provided a space for brainstorming about our vision of future global governance to advance women’s rights, justice, environmental sustainability and human rights. Then we discussed the implications of this information, analysis and reflection for our own strategizing as women’s rights activists.  We closed with a focus on ‘what’s next’ on the global agenda, for example: the structures being proposed as part of the Rio+20 agenda, the Cairo and Beijing + 20 process, the proposals for reshaping global financial architecture, the proposed new global development partnership and the likely ‘post-MDG’ framework.

A summary prepared by Susan George of the issues raised in the in-depth session “Changing World Geopolitics and Global Governance: Making sense of the trends, actors and their implications for women’s rights” at the 2012 AWID Forum is included below.

Introduction: Geopolitics is entirely concerned with power—the question of rights, including women’s rights, does not come into it unless forced onto the agenda by citizen action and even then provides no guarantees of enforcement.

We may distinguish three phases in recent history:

CONCLUSION: Advances for women are entirely due to activism and pressure.  The major development institutions like the World Bank are now obliged to pay attention to gender and to include many more women in staff.   However, at the same time, it has virtually stopped investing in smallholder agriculture of which a high percentage are female, especially in Africa.   NGOs are on the other hand very sensitive to gender.  Therefore the pressure must continue and binding laws obtained rather than counting on codes of conduct and other voluntary measures.

This edition of GenderIT.org reflects on the feminist politics and practices of technology within the broader debates around economic justice and women’s rights at the 12th AWID Forum that ran from April 19 to 22, 2012 in Istanbul, Turkey. GenderIT.org’s writers and partners report on the opportunities presented by open internet for women’s organizing ranging from online mapping of street harassment, documenting video testimonies of women or producing powerful infographics. A number of the contributions spell out the challenges. “As we rely more and more on social media for our activism,” writes one contributor, “knowing about security and privacy is really key.”

The authors also question the notion of ‘free online services’ and critique governments and private corporations for censorship, surveillance and monetization of our relationships, networks and communications for the purpose of profit. This edition is therefore also a call to connect and act. As Jan Moolman highlighted in her editorial:”unless women are at the table where decisions around governing the internet are made by governments and corporations,…, women will be on the menu.”

Katerina, Flavia, and Sonia from the GenderIT.org’s team.