Access to and control over resources: Organizing for women’s economic empowerment

Posted in Access to and control of resources on March 11th, 2013 by AWID Staff 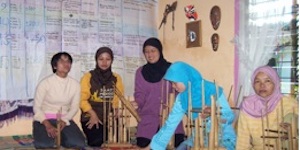 Consumer-driven capitalism, the elimination of social safety nets and the privatization of public goods and services has turned everything, from land and capital to healthcare, technology, clean air, and even political influence, into a commodity – accessible only to those willing and able to pay a price. The resulting inequities in access to and control over resources are the product of a democracy deficit, where the interests of a few are served on the backs of the many, most especially those marginalized by their ethnicity, race, class, gender, sexuality, nationality, and location. As entrenched as this neoliberal economic model may seem, alternatives do exist, pioneered by women working on the front lines of social justice struggles and based on more sustainable, democratic values of solidarity, mutuality, and human rights.

This in-depth session explored the various factors that influence women’s access to and control over resources, enabling participants to identify openings and inspiration to advance change. We drew on case studies to illustrate how women are mobilizing their collective organizing power to cope with the medicalization of HIV/AIDS in Southern Africa; push back against land grabs in Guatemala; and build movements around alternatives to conventional microcredit schemes in Indonesia.

A couple of summaries prepared by Just Associates (JASS) staff of the issues raised in the in-depth session “Access to and control over resources: Organizing for women’s economic empowerment” at the 2012 AWID Forum are included below.

How can you talk about rights when poor women cannot even feed their children day to day? They’ll never have enough time for training and organizing. Organizing for political rights cannot be separated from practical needs. In the context of poverty, if we want women to be involved politically, we have to support them first to organize for access to economic resources – cash and property – and for the freedom that these provide.

We are often asked how we build economic groups without engaging with the huge funding pots offered by the international NGOs and agencies promoting microfinance. If women are poor, where do we start?

We start from zero, talking one by one with each woman to find out her priority concerns. Women always start with the problem of money. So we begin with savings as a practical means to bring women together but also to seed a strategy to resist consumerism. With these small savings to start with, women are able to invest in joint economic endeavors that generate a growing profit over time if they are frugal and work hard. They control their own income, which is not owed to anyone. The more women have cash in hand, the more they can bargain with their partners and husbands. They become more independent and powerful.

“What do women really need? They don’t need a loan! They need to organize! Many banks come to the villages where the coops we work with are situated. Our women say, ‘No, we don’t need your money.’”
– Nani Zulminarni, JASS SEA

By setting up cooperatives or credit unions, women also practice new leadership, decision-making and democracy: one women, one vote, equal rights. This leads to more practical and emotional independence. Of course, it takes lots of consciousness raising and capacity building. That’s an appropriate role for NGOs, we feel; not bringing in the money and making profit off the interest that individual women have to pay. Participatory democracy and leadership does, inevitably, create clashes and internal conflict – people always resist doing things differently. Some want to take control, which is why we have a leadership change every three years. That’s our role as organizers – to develop and support new kinds of leadership and to build women’s capacity to manage conflict.

We don’t attach women to an existing cooperative. They build their own together. From the profit they generate by investing their savings, they eventually have enough to build their own women’s centers. Economic organizing in this way enables us to work under oppressive governments. We say, “We’re doing savings and credit” and then the authorities leave us alone. Over time, our experience shows that the women promote their own leaders to become village head, or members of the village parliament. From there, they have influence, gain more power, and can make bigger change.

By Lisa VeneKlasen
Executive Director, Board of Directors, and Co-Founder – JASS Crossregional

“Empowerment… is the process by which those who’ve been denied the ability to make strategic life choices acquire that ability.”

“…empowerment refers to a range of activities from individual self-assertion to collective resistance, protest and mobilization that challenge …power relations …Empowerment…is a process aimed at changing the nature and direction of systemic forces that marginalize women…”

Access to and control over resources is about power. Today, the ferocious scramble to control and exploit resources—from land and forests to technology and human DNA—is a scramble for power. Women’s seemingly micro-struggles for access and control of resources are shaped by “macro” dynamics at the household, community, national and global levels. Organizing for women’s economic empowerment means understanding how power operates in all of these realms and transforming it to achieve more just and democratic ends. This includes broadening our understanding of access and control of resources from an analysis of power and rights; and identifying and learning from women’s strategies that tap into and build upon many kinds of resources to create alternatives that improve lives and promote reciprocity, justice and wellbeing for people and the planet.

What do we mean by resources?

“not only material resources in the most conventional economic sense, but also the various human and social resources which serve to enhance the ability to exercise choice.” (Naila Kabeer)

Access: the opportunity to make use of something/resources for a larger gain. Access will reflect the rules and norms which govern distribution and exchange in different institutional arenas.

Control: the ability to choose or define how and for what purpose it will be used, and even to impose that definition on others—in other words, another word for “control” might be power, and power can be positive or negative depending on its purpose.

Common myths about access: many efforts and policies to improve women’s access to resources focus on making a resource available and improving so-called “equality of opportunity.” Such approaches usually fail to rectify discrimination because people are not in the same position to be able to take advantage of the opportunity due to historical disadvantages and social norms.

What do we mean by power?

Behind questions of inequality, exploitation and oppression are the dynamics of power and privilege. We define power as the degree of control over material, human, intellectual, and financial resources exercised by different sections of society. Power is dynamic, exercised in the social, economic, and political relations between individuals and groups, and can be used for both positive and negative ends.

Most people associate power with “power over”—that is, the ability to control and make decisions for others, with or without their consent. Power over can take on oppressive and destructive forms, perpetuated by the threat or use of violence. But there are other positive forms of power too. Power within is one’s own sense of self and agency; power with is collective power, the power of numbers built through common cause and solidarity.

Many advocacy strategies focus on shaping visible forms of power over—for example, laws, policies, and elections. However, power over operates in less tangible ways that, if left unaddressed, make any policy victory tenuous. Hidden power operates in the unspoken rules, behind-the-scenes negotiations, and agendas of influential actors and institutions. Invisible power includes cultural and/or religious beliefs, norms, values, many of which are internalized through the process of socialization.

What do we mean by feminist movement-building?

Building feminist movements is a process that mobilizes women, women’s organizations (and their allies or supporters) for struggles whose goals are specific to gender equality outcomes—for instance, for eradicating practices like female genital mutilation, bride-burning and female foeticide, or violence against women, or for expanding equality of access to citizenship (e.g. franchise), land or inheritance rights, education, employment, health, or reproductive and sexual rights.

Feminist movement building, on the other hand, could be defined as the attempt to bring feminist analysis and gender-equality perspectives into other agendas and movements—classic examples are the efforts of many feminists to engender the analyses, goals and strategies of the environment, peace, human rights, and peasant and labour movements around the world. Feminist movement-building can also involve building movements among women from different movements or agendas

Adapting the ideas of Naila Kabeer, Martha Nussbaum and others, resources are essential for realizing rights and equality. Women need power to translate access into real improvements in their lives and world. Challenging the institutional and social barriers that prevent women’s access to resources is political and risky, and demands individual and collective empowerment and organizing strategies as the case studies demonstrate. Put simply: