Posted in Financial Flows on February 4th, 2013 by AWID Staff 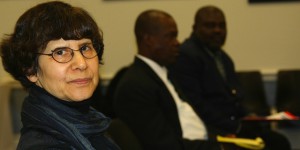 The session highlighted 1) an overview on the IFIs (what they are, their role, and how they influence and impact country policies, investments and women’s rights and livelihoods); and 2) how civil society can advocate for gender sensitive IFI investments that promote women’s rights and justice. A summary prepared by AWID staff of the issues raised in the economic toolbox session “Understanding International Financial Institutions (IFIs)” at the 2012 AWID Forum is included below.

Top 10 Things You Should Know About IFIs

1. IFIs are publically owned and need to be held accountable

Multilateral financial institutions (such as the World Bank, International Monetary Fund as well as regional development banks) are the largest taxpayer funded institutions; they are publically owned and influenced by many governments. There is a need to hold them accountable (it is our tax dollars that fund their initiatives.)

In theory, IFIs are supposed to help low income countries (LICs) maintain their macroeconomic balance, however they never support stimulus funds. Countries often have to raise taxes and reduce public spending as part of the terms of “policy based loans” which require countries to spend in austere ways.

Reduced spending on public services leads to a disproportionate negative impact on women who tend to be responsible for unpaid carework, which increases as spending on health care, education, water, gas and other essential services, is cut.

4. The US has an unreasonable amount of power within IFIs

For example, the United States is the only country that has veto power in the World Bank. (In order to have veto power, the country has to own 15% of the shares, the US owns 16%, and Japan is next with 8%, with Europe and China owning 3 – 4%. Altogether all African countries own only 5% total.)

5. Countries in the North also control a high degree of power within IFIs

6. Corporations are the biggest beneficiaries of IFIs

Corporations are largely the beneficiaries as they all compete for the contracts for the projects that receive loans; they play a strong lobbying role with the US congress (fuelled by personal/political interests.)

7. IFIs only fund projects that make sense in the short term, without considering the long-term vision

Loans and contracts from IFIS are infrastructure focused i.e. building schools, and hospitals, but they do not fund operational costs for salaries to run the hospitals and schools. There are buildings and equipment in LIHs that are not being used due to them not having the resources, training or capacity to operate them.

8. User fees for essential services supported by the World Bank has result in the exclusion of women and girls from lifesaving services

9. Women and girls bear the brunt of the environmental, social and economic impacts of the World Bank Group’s increased spending on extractive industries

10. The failure of the IFI investment model presents an opportunity for advancing an alternative vision grounded in human rights