Rethinking Ideas of Work from a Feminist Perspective 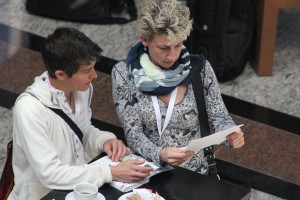 This session explored how feminists have sought to reconceptualize the idea of work. It highlighted the artificial nature of the distinction between paid and unpaid work. And it discussed how the rise of global care chains has made visible some of the hidden dimensions of women’s work. A summary prepared by AWID staff of the issues raised in the economic toolbox session “Rethinking Ideas of Work from a Feminist Perspective” at the 2012 AWID Forum is included below.

How has work been defined and how have definitions changed over time?

In 1956 (within the UN National Accounts system) work was defined as gainful employment for pay or profit – in other words, working for a wage or salary, and in the case of self-employment, selling a good or service for money.   If for instance one worked on a family farm, it would only be defined as work if the produce were sold for profit. This excluded subsistence production such as the collection of basic necessities like water, firewood and fuel, domestic work and care of the family.  Consequently this enforced a value system where it was market prices that determined what value work contributed to a nation.  Upon closer examination, we find that this definition is arbitrary and not reflective of people’s daily lives.  As well, there were contradictions in the framework, for example if a man married his housekeeper, the GDP of the country would go down, as she would no longer be working for pay yet she was doing the same work.  In addition, Third World countries complained that this system gave the impression that their country was not productive.

In 1966 the definition of work was expanded to include the production of economic goods and services that could have been sold, even if they were not sold e.g. animal tending or food processing.  In this case, work was counted if there was a market for the goods and services. This new definition had a huge impact in capturing a wider range of productive activities.

Then again the definition of work was further expanded in 1993 to include all activities that meet the family’s basic needs for goods and services that could have been produced in a monetized economy such as gathering fuel and water.  However, this definition still excluded unpaid care services as it was stated that unpaid care services have ‘limited repercussions’ on the economy.  The UN expanded by explaining that by including unpaid care work in the definition it negated the whole system, as these services do not change and do not impact the status of the economy.  However the UN recommended satellite accounts to capture time use (of unpaid care work.)

From a women’s rights perspective, this definition did not attribute value to a vast array of duties, mostly performed by women.  One definition that is more inclusive dates back to 1934 from Margaret Reid who said that in principle, any activity that could be performed by somebody else, that is not the person who is benefitting from the activity, should be considered productive (work) from an economic perspective (e. g. cooking is work; but eating is not.)

In fact unpaid work, in particular care work, is a profound factor in structuring the paid economy.  Unpaid work is reproducing labour on a daily basis and subsidizing the reproduction of labour for capital accumulation.  In states that do not take care of social provisioning or that cut back on provisioning, unpaid care work fills the deficit. Unpaid care work is the invisible ingredient that will allow MDGs to be met.  There is a resilient stratification in the paid economy with women very clearly concentrated in part time work, self-employed work and casual work, etc.  Unpaid work determines how much time women have available for paid work and it determines what kinds of work they do.   This perspective must be taken into consideration in policy and procedure on an international, national and local level to ensure that concepts of work include a human and women’s rights based approach to ensure that development occurs in a way that is equitable.

One suggestion to recognize and value unpaid work is to been to develop a system through which unpaid work is compensated.  Some say that it would be such a complicated exercise in order to establish rates and a framework and as such would be a waste of resources.  It has also been suggested that care has its own rhythm and logic, that it is not done in response to market prices and that evaluating the work using the same measuring stick, reduces it to the lowest common denominator.  On the other hand, it is important to know who is contributing in society, and there is a need to recognize that unpaid care work is part of the total economy.  It is influenced by and it influences how macroeconomic policies work.  In a world where measurement is important, if we don’t count it, then it isn’t counted.

There are a number of factors and arguments for and against compensating unpaid work.

Do we need to monetize unpaid work?