Posted in The Planet & Ecological Health on February 7th, 2013 by AWID Staff 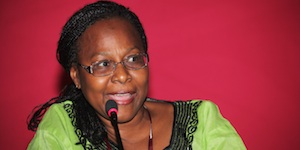 This session explored the gender dimensions of international climate change finance, including essential nuts and bolts of gender climate change adaptation, mitigation and technology transfer and development. Participants mapped out the instruments, institutions and modalities of climate change financing as they exist and are emerging globally, regionally and nationally. A summary prepared by AWID staff of the issues raised in the economic toolbox session “Climate Change Finance and Women’s Empowerment” at the 2012 AWID Forum is included below.

10 Things You Should Know

1. Climate change is defined as the long-term rise in the average temperature of the earth’s surface, and the systemic/chronic state of variability in the climate.

2. The Intergovernmental Panel on Climate Change (IPCC) is a body of over 2500 scientists who analyze scientific findings and reports in order to assess the state of climate change.  Since 1988, they have presented the consensus that the planet is warming and it is likely due to human factors including the burning of fossil fuels, coal, gases, etc.

5. The Conference Of Parties (COP) is the operational body of the UNFCC that is responsible for making decisions and developing the policy infrastructure for climate change financing.

6. In 2010, the Conference of Parties (COP) formally established a target to prevent warming beyond a global mean of 2 degrees Celsius.

7. Due to the agreement that industrialized nations are more responsible for the emissions of green house gases and need to provide compensation for the damage they caused, the principles of climate financing include that it must be new and additional to funds to those already targeted for development; as well the funds must be adequate and should not put a burden on developing countries.  There are a number of mechanisms available for developed countries to provide this funding such as:

8. Climate change is not gender neutral.  Women have been working to integrate gender into the policy and financing in the climate change architecture.   During extreme weather events, more women die than men (or die at a younger age) because of a variety of factors including:

9. Through an exercise in which developing countries put forth their most urgent issues for adaptation, women’s rights was usually absent and in some cases only mentioned at a surface level, but then evaporated with more in depth analysis.