Women and Seeds for Resistance[1] 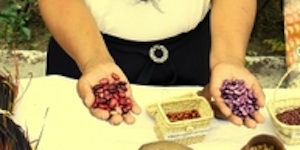 FRIDAY FILE: The onslaught of transgenic food production, the advance of agro-business driven single-crop farming and the exploitative economic development model, are putting food sovereignty at risk. Those supporting and reinforcing these practices, including transnational corporations, are more focused on profit than caring for food and natural resources.

AWID spoke to Chilean peasant activist Francisca Rodriguez[2] about a campaign to defend seeds as a resistance practice in the face of corporate power.

In 2001 women from Coordinadora Latinoamericana de Organizaciones del Campo (CLOC, Latin American Coordination of Peasant Organizations) met in Mexico for the 2nd Continental Assembly of Peasant Women “Peasant women sowing a millennium of life, justice and equality”. Following this meeting they submitted the idea of launching a global campaign to defend autochthonous and indigenous seeds to the 3rd CLOC and La Via Campesina (LVC) Congress. In 2002, during a Forum held in parallel to the World Food Summit, La Via Campesina and Friends of the Earth International together with other organizations launched the global campaign, initially called “Seeds as the Common Heritage of Humanity”.[3]

The Campaign is be based on the multiple forms of indigenous and peasant knowledge about seeds, agriculture and biodiversity as valid in and of themselves, requiring no validation from outside sources, scientific or other. It seeks effective ways to involve and engage society as a whole, including requesting the support of technicians and scientists when the processes of biological and cultural erosion deem it necessary. Leadership and final decision-making rests with LVC, peasant and indigenous organizations and communities. The Campaign is part of the struggle to defend, reinforce and/or recover peoples’ political, cultural, economic and food sovereignty, and its actions are framed within a broader struggle against the capitalist system and its neoliberal phase. It is therefore also part of the search for alternative peoples’ projects and is closely linked to the defense of peasant and indigenous lands, territories and cultures.

In each country, the Campaign is conducted according to local realities, through biodiversity fares, local markets and seeds exchanges.[4]

AWID: Why did you choose seeds as the campaign?

Francisca Rodríguez (FR): We were discussing food sovereignty (FS) in Mexico, and we reached the conclusion that we were doing food sovereignty in all its dimensions and while men were talking about it they were not fully taking it on. We realised that FS was going to be at risk because even if agrarian reform happened, if we did not defend the seed, the reform was going to be left to the will of transnational seed corporations. It was therefore not an emotional, heart-driven identity; it was a political decision to propose the Campaign.

AWID: Why did the name for the Campaign change?

FR: At Rio +10, in Johannesburg in 2002, the transnational seed corporation Monsanto agreed that seeds were humanity’s heritage because in that case all of us would have a right to them, including the company. We almost had a heart attack! And we questioned our strategy, so it was in our second meeting in Caaguazu, south of Paraguay, we said: “No, they are not the heritage of humanity, they are the heritage of our indigenous and peasant peoples, of women who created and placed them for the good of humanity.”

The key to food sovereignty is in the seed – everything begins there. There can be no food sovereignty without the seed. There can be no agrarian reform without seeds. We cannot be sovereign peoples if we don’t have our own seeds. We lost everything and now we are subjected to what the food industry – that took over our seeds – wants to offer and sell to us, influencing how we eat and also how we live.

AWID: How are women involved in the Campaign?

FR: With great conviction. We say the Campaign is magic because not only does it call us but it makes us visible again; it raises our self-esteem; we feel women are finally acknowledged as having wisdom. To some extent we recovered the notion that we were the first farmers, the discoverers of seeds and we have kept taking care of them for centuries, reproducing them. The Campaign empowers us. We are no longer mere housewives but those who take care of the vegetable garden, preserve the seed, reproduce the seed and reproduce life.

AWID: How is the Campaign contributing to women’s economic rights?

FR: It was a battle for recognition, but today they are much more visible. Nowadays, the very existence and survival of the peasant world has a woman’s strength, because many rural households are held together by women’s labour and agricultural practices. This is why recovering and sharing our knowledge in the face of agro ecology, not as a fad, but as indigenous and peasants’ own production systems, is integral to the campaign.

AWID: Why are you in disagreement with the notion of food security

FR: We are against it because the notion of food security, both that of Food and Agriculture Organisation (FAO) and of governments, is related to peoples’ ability to acquire food and not to their need to produce food or their ability to establish solidarity and horizontal relationships between peoples to guarantee the basic right to food.

We want healthy, culturally adequate food, produced by peasants themselves to be accessible to all. Food is a right, not a business. And so our claim is for governments to invest. That is where we need to have resources available, because it is their obligation and duty to guarantee people’s access to food.

Today people are not aware of what they eat and there is less access to information for most of those at the grassroots. This is why we are going to defend agro ecology, so it does not become just another business. Urban agriculture is found at the middle classes, it is elitist, for those who can pay more for their health. We want to bring our production to people at the local markets; bring the country produce to town and get rid of the chain of intermediaries. So that people know where their vegetables came from and who and what conditions produced them. To the extent that people in cities understand this, peasant agriculture will be saved. Agrarian reform is not a social process, it is a life process, guarding people’s right to food

AWID: Could you give us an example of a specific action that made a transnational company back down?

FR: In Chile, we demanded to be informed where the transgenic seedbeds were. By law, there can be no transgenic food production in Chile but still transgenics are all around. Monsanto argued they could not reveal it because there was a vandalistic organization, affiliated with La Via Campesina – that is, ANAMURI – that was ‘placing humanity’s advancements at risk’.

When the Tribunal ruled in our favour and Monsanto was forced to reveal the location of seedbeds, the company appealed but our claim against the UPOV Agreement was so strong that Monsanto withdrew the charges against us. In Paraguay, women along with the Agriculture and Plants Department went around plucking the clandestine transgenic fields of crops.

The notion of food sovereignty and the concern about the seed is no longer the peasants’ only; it is also a concern for environmentalists and ecologists. It is growing in the awareness of grassroots people and it will be discussed in Rio +20, it is already in international fora.

AWID: What are the future challenges?

FR: Today we need land and seeds, because the market has appropriated the seeds. Our campaign to multiply seeds is urgent. We don’t need a vegetable garden we need fields. We are willing to take risks and break the laws that recriminalize the production of peasant seeds. This means resisting State agricultural policies to build sovereignty in our fields. Food sovereignty goes beyond merely preserving the seed or securing food; it is our rights that are at stake, it is peasant survival.

It is hard work, demanding strong commitment, because it is not only about recovering the seed but also everything associated with it. And those are the values: spirituality, solidarity and camaraderie among us. Those value elements behind the Campaign allow it to be well received by the people we can relate to and can reach out to. And because we are an organization, there is a huge demand for women to go out and talk about this. And the more we do it, the more we get committed and passionate about it. You mention the seed and I lighten up. You mention women and the same happens. Because I think the seed comes together with us, and we come together with the seed; they are seeds of freedom, seeds of autonomy, seeds of justice and seeds of dignity; seeds of resistance and we are women in resistance.

[1] “Seeds: Heritage of the People for the Good of Humanity” Campaign. This is the name by which it is currently known; its earlier name, as stated, was “Seeds: Humanity’s Common Heritage”.

[4] In Chile there are seed curators’ schools. The purpose of these schools is not to lose this ancient knowledge. “The curator is who watches over, who guards, who protects the seed”. In Ecuador, there are huge food sovereignty tables, held in parks.