Posted in Access to and control of resources, The Role of the State on December 6th, 2012 by AWID Staff
Source: AWID Friday Files 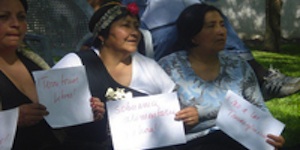 FRIDAY FILE: As we celebrate International Food Day and International Rural Women’s Day this month AWID interviewed Elizabeth Mpofu, peasant women leader of La Via Campesina in Zimbabwe to reflect on the intersections between hunger, agriculture, gender, social and environmental justice and highlight the importance of food sovereignty.

AWID: Via Campesina challenges the international debates on financing African agriculture that seem to be shaping the form of agricultural development and the nature of the African food system of tomorrow. Can you explain this further?

Elizabeth Mpofu (EM): The current international debates on financing African agriculture are a big threat to our environment, mainly because they target our way of farming and ban our indigenous seeds. They have introduced what they call green revolution, and patented-seeds, which require a lot of irrigation for the high yield crops.

By saying that “African farmers must improve their yield crops”, proponents of the Green Revolution support the introduction of large-scale monocrop agriculture (agri-business) and want to transform traditional farmers into “entrepreneurs”. As Via Campesina, we stand against this model, and say that as peasants and small-farmers we are the guardians of life, of seeds, of healthy food, of nature in general. What we need from our governments is more support to be able to develop agroecological farming and the traditional agriculture we have been practicing for centuries.

Governments should put in place more public policies to defend our rights and to achieve food sovereignty in general and provide more access to credit, to land, to natural resources and to markets etc. But most of African governments support “food security”, which justifies the promotion of foreign investments in land and in agriculture. This provokes situations of land grabbing and expulsions of farmers from their land, among other things. Food security as a concept does not care about how food was produced or who produced it, the key aspect is to “supply food”. Therefore, in the name of food security, lobbied by transnational seed companies, governments justify the introduction of genetically modified (GM) crops and all their associated chemicals. As Via Campesina, we are against this model and defend food sovereignty – the right of all peoples to define their own agricultural and food policies.[1]

AWID: How has traditional agriculture changed with the arrival of the green revolution and the revival of it?

EM: For la Via Campesina in Africa the “Green Revolution” is a vision of agriculture turned towards profit for the few elite, and not towards the welfare of human beings. With the Green Revolution, despite the word “green”, food and agriculture are considered commodities.

The green revolution automatically rejects the use of indigenous seed and natural resources; and introduces the use of chemical pesticides. We have seen the effects of the green revolution in India and other Asian countries. The introduction of hybrid seeds (that cannot be reproduced in-farm) and the chemical package that goes with it has created ecological damage.  Peasant’s have suffered by getting into debt, to the point that many peasants have committed suicide, because they were not able to pay back all the money owed for seeds, fertilizers, pesticides etc. the Green Revolution is not a model that we support.[2]

AWID: How does the life of peasant women change with the green revolution?

EM: Women are the most affected with this green revolution as the majority are working in farms. As main food producers, this system with the use of chemical pesticides has detrimental effects on women’s heath, with a lot of disease being experienced due to the chemicals.

AWID: How does the agriculture model of the green revolution affect food sovereignty of people in Africa?

EM: Farmers will start using GMO seeds and inorganic fertilizers. These seeds cannot be replanted and we cannot exchange them because they are patented by the seed companies and therefore belong to them. Furthermore, an agricultural model that defends large-scale monocrops for agrofuel production and for food export goes against food sovereignty. It aims at responding to the demand for profit of those who own the capital, rather than responding to the demand for enough healthy and culturally adapted food for the majority of the rural poor. When farmers start producing cash crops, they have less time and less land to produce food crops, which means they have to buy food somewhere else with money they do not have. Or if they turn rural worker for a big company, then their family becomes dependent on external food supply.

AWID: How do women cope with these challenges?

EM: It is a big challenge but as women we are lobbying our governments to support us and to put policies in place that meet our needs, and the way we want to produce and what we want to consume. We will continue mobilizing ourselves to fight against the green revolution and the vision of agriculture and food that it represents.

AWID: Big companies and governments invest in Africa’s agriculture production on the basis that in order to solve hunger in the world, we have to produce more food, do you think this is a good strategy?

EM: This is not true, what is needed is for African governments to support farmers by providing them loans for their agricultural inputs as we need to boost our agriculture by use of organic fertilizers and purchasing animals to get manure and run projects. We African farmers have the ability to produce enough for our nations; we cannot import grain like beggars.

AWID:  Scientific evidence even UN agencies like FAO say that agroecology and food sovereignty are crucial, why do you think we continue to export the agricultural model that generates more hunger and poverty in Africa?

EM: Because big interests are at stake, and most of the time private lobbies are more powerful than our own States. As stated before, food is considered a commodity rather than a right. So as far as money and profit continue to rule the world instead of human welfare, we will have this struggle – between two visions of agriculture: on one hand the agribusiness model and the supporters of the Green Revolution, and on the other hand movements like Via Campesina, who defend food sovereignty with all its ramifications and meanings.

[1]For more details about Food Sovereignty, please refer for instance to the Declaration of Nyéléni, issued during the International Forum on Food Sovereignty hold in Mali in 2007: http://viacampesina.org/en/index.php/main-issues-mainmenu-27/food-sovereignty-and-trade-mainmenu-38/262-declaration-of-nyi