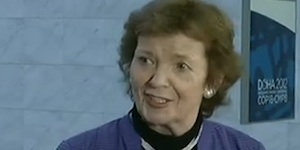 We’re joined at the U.N. Climate Change Conference in Doha by Mary Robinson, the first female president of Ireland and former U.N. high commissioner for human rights. Today Robinson heads the Mary Robinson Foundation–Climate Justice. She is a member of the Elders and the Club of Madrid and the recipient of numerous honors and awards, including the Presidential Medal of Freedom from President Obama. “I believe that this is the biggest human rights issue of the 21st century, and I believe that it’s a way of addressing issues of development and issues of tackling poverty,” Robinson says. “It means that we have to take into account the injustice of the fact that it’s the fossil fuel growth in the United States, Europe and other developed parts of the world, which has contributed to undermining development of very poor people, undermining their livelihoods. … We can actually change the quality of life for both rich and poor countries in a way that doesn’t undermine happiness and good livelihoods.

AMY GOODMAN: We begin today’s show from the U.N. climate change summit right here in Doha with Mary Robinson. She was the first female president of Ireland and former U.N. high commissioner for human rights. Today she heads the Mary Robinson Foundation–Climate Justice.

And we welcome you to Democracy Now!

AMY GOODMAN: Talk about what is happening here at the U.N. climate summit.

MARY ROBINSON: I wish more was happening here that was real for people outside Doha and who need an urgent and ambitious climate agreement. Unfortunately, there is a lot of position taking. It’s almost like a trade negotiation rather than an urgent meeting about staying below 2 degrees Celsius, getting urgent commitments on emissions, on adaptation, on transfer of technologies and on finance. And it’s really very frustrating for those who come hoping that the negotiators will take their responsibility.

AMY GOODMAN: Let me ask you about a quote of Todd Stern, the U.S. climate negotiator, last year in Durban, when the U.S. opposed the inclusion of the concept of equity in the Durban mandate, saying it would be used to enforce binding emissions targets on developed countries, the biggest polluters. He said, “If equity is in, we are out.” What does “equity” mean?

MARY ROBINSON: Well, equity is in the convention, and so is common but differentiated responsibilities and respective capability. So it can’t be out of these climate negotiations. And equity means fairness, basically. It means that we have to take into account the injustice of the fact that it’s the fossil fuel growth in the United States, Europe and other developed parts of the world, which has contributed to undermining development of very poor people, undermining their livelihoods. I’ve seen it all over Africa and South Asia. To me, as a human rights person, it’s unconscionable that we will not take that seriously and talk about equity.

But equity isn’t a zero-sum game. Equity is not negative. It’s actually potentially very positive. It means that we can get a fair agreement that provides access to clean energy for the 1.3 or 1.4 billion who have no electricity in the 21st century and the 2.6 billion who cook on charcoal and animal dung and coal and ingest fumes that kill two million people a year. So, we can actually change the quality of life for both rich and poor countries in a way that doesn’t undermine happiness and good livelihoods.

AMY GOODMAN: President Robinson, what is your assessment of the U.S. role here? It’s significant not just because we’re an American broadcaster, but because it’s clearly, so much of the time, calling the shots here.

MARY ROBINSON: There was expectation that the Obama administration would lead on climate. And I can understand some of the reasons why it was not possible in the first term. And I’m glad now that President Obama’s gone on—going on a listening tour, that he has referenced climate and the impact of it. And there is a huge need for leadership by the United States, because this is the most important decision that any negotiators will take, that we get a good climate agreement by 2015, the Durban enhanced platform, and that it must deal with issues of equity, not just in mitigation, but in adaptation for poor communities, in transfer of technologies so that the right to development of poor communities is respected, and in financing in order to help that.

There was a good decision made here in Doha, and that was on increasing the participation of women, having gender balance in all the bodies of the UNFCCCand in the delegations, and having gender on the agenda. How did we get it? Because every delegation actually wanted this to happen. And the spirit—

AMY GOODMAN: —at the summit, and yet, when you look at environmentalists around the world, so many of them, environmental leaders, are women.

MARY ROBINSON: Yeah, and women are very affected by climate, when it undermines poor livelihoods. So, having a good gender balance will make a difference in the future. But I think it was also an indication that where there is a will to achieve decisions, they can happen here. Why is there not a will to have a climate agreement that is fair and equitable, but that deals with the fact that the World Bank is telling us, “Turn down the heat; a 4-degree world is catastrophic”?

You’ve had Hurricane Sandy. You’ve had drought in the western part of the United States. The United States—Midtown Manhattan, where I used to live, is not climate-resilient when there is a big flooding. And, you know, think of poor communities who are affected. So we need to ensure that climate is more people-focused.

AMY GOODMAN: Well, talk about Africa. You are one of the Elders, considered—you know, Nobel Peace Prize laureates from around the world. You spend a lot of time in Africa, as well. What does equity mean there?

MARY ROBINSON: I think what is really very evident in African countries now is that climate change is real and hurting. It’s real in Kenya, where you have long periods of drought and flash flooding, and in Uganda. In Liberia, when I talk to my friend Ellen Johnson Sirleaf, the president, she says, “Mary, when I was growing up, we used to have rainy seasons that were predictable. Now, a rainy season comes for far too long. I can’t mend my roads. I can’t plan my economy.” And all over Africa, the effects of climate change are being felt.

AMY GOODMAN: And particularly on women, why are women the hardest hit?

MARY ROBINSON: Because women are 80 percent of the farmers in Africa. Women have to produce the food on the table. Women have to go still further for water. It takes up far more of their time now. They’re very, very stressed. And yet, women are also forming groups to be able to counter this. We all loved Wangari Maathai, and unfortunately she died too early, but there are actually a lot of women like that who are engaging in tree planting, who are engaging in water management, in order to try to improve the situation. They’re not just adapting, they’re mitigating. They’re doing it because they have to. They’re on the edge. They’re stressed. Why can’t we in the richer parts of the world understand it’s going to affect all of us? We’re all in a kind of sinking ship together, going into a 4-degree-or-plus world. There is no way we will have a peaceful world.

You know, the good thing about women is, we are very intergenerational. I think a lot about my four grandchildren. They will be in their forties in 2050. They will share the world with nine billion others. I worry not just about my grandchildren. What kind of world will it be when we have far more weather shocks, far more drought, far more food insecurity and water stress? I mean, what will they say about us? Why didn’t we get real here in Doha? Why didn’t the United States give more leadership in Doha and beyond? That’s the questions that the next generation will ask of us.

AMY GOODMAN: Many are accusing the U.S. of attempting to dismantle the Kyoto Protocol, which it never signed onto to begin with, by moving away from binding commitments and going to voluntary targets. As we conclude, as you wrap up to go to yet another meeting here, what about voluntary targets?

MARY ROBINSON: Amy, I don’t think voluntary targets alone are enough. We can have a lot of voluntary in the private sector and elsewhere—everybody has to take their responsibility—but we do need binding, verifiable targets for all now. And that’s what the—actually, it’s what is in the Durban enhanced platform. It’s an agreement for all countries, because the emerging economies are becoming the biggest emitters. They’ll be the biggest historical emitters in the future, when we look back. So, we need a new willingness, a new trust. And that can only come from leadership, particularly of those who need most to lead, and the United States is on the forefront of that.

AMY GOODMAN: Finally, Mary Robinson, you were the president of Ireland. Then you were the U.N. high commissioner for human rights. Now you are running the Mary Robinson Foundation, and you’re focusing on what you call “climate justice.” Why are—has climate become your major issue?

MARY ROBINSON: Because climate change is posing one of the biggest human rights challenges I have ever known of the century. It’s undermining livelihoods—rights to food and safe water and health and education. It’s having people displaced by climate, and that can bring conflict. We’re told that we are likely to have as many as 200 million climate-displaced people by 2050. That’s not very far away. Where will they go? What kind of conflict will that bring about? So, I wake up every morning thinking we have to be more urgent, we have to be more ambitious. When I sit in the halls here and listen to the clichés of trade negotiators, who should be talking about the future of the planet, it—you know, I cannot tell you how—and yet, I get great hope from young people from the business community. I took part in a climate summit of business leaders yesterday. They want the climate negotiators to be more urgent, and they want the United States to take more leadership—

AMY GOODMAN: —are calling on the U.S. to take more action.

MARY ROBINSON: Calling on not just the U.S., on the EU, on the U.S., on the rest of the world, because they want to do business, and they can see that we are not going to have a sustainable future unless we act now.

AMY GOODMAN: Mary Robinson, I want to thank you very much for being with us.

AMY GOODMAN: Mary Robinson is president of the Mary Robinson Foundation–Climate Justice. She was the president of Ireland from 1990 to 1997 and served as the U.N. high commissioner for human rights from 1997 to 2002. She’s a member of the Elders and the Club of Madrid and the recipient of numerous honors and awards, including the Presidential Medal of Freedom from the president of United States, Barack Obama.