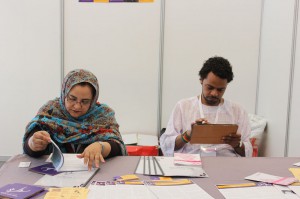 Even though the connection to the internet has been intermittent at best and often too slow, women advocates in Yemen are now working to push digital tech as a means to improve society and gain human rights. As women continue to battle extreme sexual harassment on the streets of Cairo, Egypt, women in neighboring Yemen are also fighting the fight against what some say is a centuries old crime. Bringing action and efforts forward to stop their harassers, a strategic group of women activists are now working to stop what they consider ‘crimes against women’s dignity and rights.’

Women who have been verbally attacked on the streets do not usually share their experience publicly. Many internalize the experience thinking they have done something wrong to gather the unwanted and often damaging attention. Street harassment does not only include verbal abuse. It also includes being touched in a manner that is sexually aggressive. A December 2011 case in Cairo, Egypt has shown a woman who was critically harassed as her clothes stripped away as she battled with her harassers. This harassment was considered to be both political and sexual in nature.

‘Defying the Silence,’ an organized the ‘safe streets’ campaign in Yemen, aims to bring law and justice to the issues of sexual aggression against Yemeni women on the streets. Since 2009, Ghaidaa al Absi, an innovative leader and Global Voices (Rising Voices) grant recipient has been helping women jump to the cyber street of blogging to bring attention to injustice and issues of human rights under conditions that many have considered to be much deteriorated since the civil unrest and pro-democracy movement began in the region. In spite of this, the group of women activists have continued, often meeting in a members home.

“As of June 2011, public services in most parts of the country had ceased to function, as the escalating armed conflict began to claim an increasing number of civilian casualties,” said the UNHCR – United Nations Refugee Agency describing challenges that still exist inside the region. Due to internal strife a rising tide of displacement has happened in Yemen as women continue to be marginalized.

“By August 2011, some 100,000 IDPs were registered in the south, in addition to the 299,000 IDPs already in the north of country as a result of the war between the Government and the ‘Al Houthi’ rebel movement,” added the UNHCR.

To push for safer streets in Taiz City, Ghaidaa al Absi, a rising group of 200+ women have brought attention back to the issues of women and Yemeni society. Persistent problems of street harassment throughout regions in the Middle East were discussed openly during a recent world conference on women in Istanbul. But what are the solutions?

The 12th AWID (Association for Women’s Rights in Development) International Forum on Women’s Rights, April 19 – 22, recently provided a dynamic space for open discussion on issues facing women in Yemen and throughout the MENA (Middle East and North Africa) region. Activism and action were highlighted.

As part of the work for ‘Defying the Silence’ in Yemen, Absi’s goal has been to train over 200 women to become ‘experts’ in using open source online digital publishing tools as they become active voices for their communities using digital cyber-activism.

“Society accepts it and women expect that they will be touched and talked to,” said Absi at the AWID conference.

Continued reports of harassment in Yemen’s capital city of Sana’a has brought Maeen district police chief, Ahmed Al-Tahiri, to step up efforts to catch and prosecute predatory acts against women on the streets. Despite this promise for stepped up efforts, most men who are reported on sex-harassment charges often have their case caught up in what Sana’a policewoman Bushra Al-Khawlani explains is a process of office “referals’ where a case is referred from one department to another with often little to no final punitive measures being made against the offender.

Currently Yemen does not have any specific legislation protecting women from sexual harassment.

Using Google maps, Wiki and Facebook, numerous Yemeni women cyber-activists are currently now working with other activists to stop the abuse on the streets as they seek solutions, in spite of mobile challenges in certain areas and a lack of sustained internet connections they are working together to bring impact to the issues. Their work is based on efforts to improve, change and remove strife for women in the region.

“Every day I walk in the streets, and every day I face  sexual harassment. Unfortunately, it becomes daily life, and we women are forced to adapt to it either by being silent or yelling at the harassers,” shared Absi in a February 2012 interview to highlight the conditions many women face on the streets as they go about their daily routines.

Stepped-up efforts by the women under a recent micro-grant by the Tactical Technology Collective (TTC – Tactical Tech), along with the organizational leadership of Absi, are now working toward solutions. TTC is an online digital resource that shares open source toolkits, guides and information for cyber-activists worldwide. Through the TTC program grant the  Safe Streets website has produced an interactive map that now reveals ‘real-time’ locations where sexual harassment on the street has been reported by women throughout the Yemeni region.