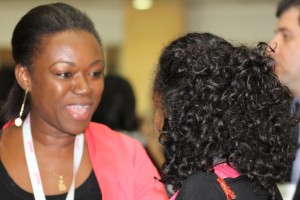 A hot topic at this AWID Forum has been the revolutions in the Middle East North Africa (MENA) region. One of my favorite sessions so far has been about the innovative ideas young feminists in Yemen, Egypt, Tunisia and Lebanon used before, during and after the uprisings.

These inspirational young women were out on the streets advocating for social and political change and mobilizing their communities towards that goal. The task was difficult, and some revolutions were not successful. In many cases, revolutions were violent as many states cracked down on activists.

Women participating in these campaigns experienced the revolution in their own way and were often targeted as women. In Egypt, the military subjected some female activists to virginity tests and the state used their sexuality as a tool for propaganda.

A group of young Egyptian feminists created an interactive live map, that tracked incidents of harassment in public places. This was a way for women to share information with each other. With the information tracked on the live map, the group reached out to community members to show them where harassment was taking place and to encourage them to play an active role in promoting violence and harassment free public spaces. You can check out the map at: www.harassmap.org

And in Yemen, a campaign called Safe Streets www.safestreets.org was also really successful in using lots of technology-enabled strategies for ensuring safety in public spaces.

Talking with feminists from the MENA region here at the Forum has been enlightening. They are faced with the challenge of ensuring that the revolutions they fought hard for advance women’s rights in a meaningful way. Where religious fundamentalism, political conservatism and militarism are the major social, political forces at play, the challenge cannot be understated. As new constitutions are developed and elections are held, the work of women’s rights activists remains critical.

As one of the young activists put it: “Hopefully our next Spring will be a feminist one”.