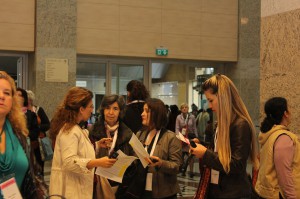 WLP partners joined over one hundred leaders, grassroots activists and academics from the Middle East/North Africa (MENA) and others from Asia, Africa, and Latin America to discuss the challenges faced by women in the MENA region and to share strategies for successful transitions to democracy. We had several days of very rich discussions, both conceptual and practical. I hope I have captured the main points.

The MENA region is at a point of no return, refusing oppression and injustice in all forms; change is inevitable. Transition to democracy has become a reality regardless of how it is defined. The rulers were removed. Though regimes might not have changed, public spaces have been opened for those oppressed under authoritarian regimes to claim their democratic rights. Open spaces are here and need to be seen as an opportunity for change. This is a beginning to more phases to change the context of our discourse about our lives. We may yet have to traverse many hurdles, but let no one doubt that it is a great achievement that cannot–must not–be undervalued.

1)  Changing context is complex and complicated, requiring longer-term planning based on new visions, strategies, methodologies and tools, which, in the case of women, would make the transition even more challenging.

2)  Democracy cannot be realized in a regime that oppresses half of the population. Democracy without gender democracy is not possible.

3)  Similarly, democracy and human rights cannot survive in situations of occupation, conflicts and wars, and in an environment of militarization. Just peace is a prerequisite to democratic transition of societies.

4)  The Goal of the change we seek is to establish firmly in principles, constitution, legislations and programs respect for human rights, including women’s rights. Therefore constitutions are to reflect social justice and human rights with inclusion of full rights of citizenship for all, beginning with equality between women and men.

5)  Bringing women’s rights into the center of democratic transition is integral to the struggle for democracy and social justice. Women must contribute to building and articulating the collective national vision for the new democratic society. Feminist contribution must make women’s rights relevant to the struggle for democracy. To be successful, women’s movements must function within the political struggle of the society.

6)  Women were essential to the success of the “revolutions/uprisings” and they were visible in all the “Tahrir Squares” of Egypt, Tunisia, Yemen, Libya and Syria. They participated in the uprisings as citizens, on equal footing with men and not as women per se, demanding social justice and democracy. They supported the national agenda for ending authoritarian regimes and establishing democratic systems. They were instrumental in bringing about change, and thus were visible as active citizens changing their societies.

7)  In the aftermath of the uprisings, women became invisible, absent from the process of formation of the new democratic state, and excluded from decision-making roles, responsibilities and positions. In the struggle for justice and rights, they were present as citizens and not as women; their demands were national demands for the whole country, men and women, young and old. They were heard. But when women opened their mouth about women’s rights, they found themselves standing alone, out of the decision-making circle. How can this be explained? We need to review, assess and adopt measures to mitigate this absence, to make sure women are present where it counts. In other words, the new situation requires a revisiting of strategies, methodologies and tools based on the requirements of the post-uprising conditions.

8)  As one sees the invisibility of women in leadership of political parties or significant presence in parliaments, one must ask: Where do the pro-democracy/liberal parties stand in terms of supporting the gender equality agenda? How can their silence be explained or justified?

9)  This stark reality of the invisibility of women leads to a number of questions: How can decades of women’s movements be backsliding? What accounts for the fragility of women’s rights in the region? What conditions allow contenders for state power to decide on redesigning women’s rights? How is it that the springtime of freedom may turn to autumn for the human rights of women?

10)  The rise of global religious power and cultural conservatism has become visible and vocal in other parts of the world, as seen in Israel with Ultra-Orthodox Judaism, the Christian Right in USA, and Evangelical movements in Latin America. The rise of Political Islam, or more accurately the politicization of Islam, is part of this global rise of religiosity and the intrusion of religion into politics.

11)  Political Islam in the MENA region has its own challenges to deal with, including, among others, how to succeed in achieving social justice or responding to activists who object to the term itself. Mobilizing is not the same as governing, which requires dealing with complex economic, social, political, and legal problems.

12)  How to deal with the rise of political Islam in all its forms, from moderate to extremist? Should political Islam be perceived as a continuation of patriarchy? Should the moderate be believed about their position on women’s rights? Should dialogue be established with the moderate groups – are alliances possible with them? Should learned women engage in responding to and replacing gender-insensitive interpretations with other more gender supportive interpretations? Or should women’s groups keep totally away from parties with Islam as a reference point?

13)  The issue of women’s rights is caught in this new environment of religiosity and the intrusion of religion into the agenda for human rights.

14)  Each national movement for change, as in the MENA region, is context specific. They share common characteristics but differ in degree and detail. Therefore, though common approaches can be identified, each needs to be adapted contextually in order to be relevant to the people themselves.

15)  Countries and people facing war and conflict should not be forgotten when speaking about the urgency for democratic transitions especially since conflict, war, and occupation, which unfortunately are components of the ongoing militarization of societies, negate human rights and democracy, and also because sectarian affiliations far override gender affiliations.

16)  In the struggle to ensure gender equality, it is imperative that international agreements, especially the Universal Declaration of Human Rights and CEDAW, constitute a reference point for gender equality within the national context.
17)  The key issue at this stage is to ensure that the current constitutional reforms clearly and unequivocally embody the concept and practice of equality between women and men and non-discrimination in both the private and the public sphere.

18)  In all transitions to democracy, countries face the challenge of achieving coherence between the newly formulated constitutions and the resulting laws and legislations. They face the same challenge between national laws and the various international agreements, especially CEDAW, a binding agreement on gender equality that is presently being challenged.

19)  There is among women’s groups an absence of consensus on, and a clear and direct articulation of, a unifying vision of what kind of society they would like to participate in forming. There is a multiplicity of views but not clarity of direction. It is not yet clear to some activists and organizations how women’s movements can be relevant as an active part of the political struggle.

20)  There is a need to build consensus among women activists to refocus demands and advocacy from purely limited women’s issues to demands that include social justice and equity for all. Mobilizing for human rights issues would open the space for more alliances around women’s issues as well.

22)  To participate fully in democratic transition, many women’s groups, which had limited understanding of feminist theory, need to delve more into understanding feminism and its linkages with democracy and social justice.

23)  The struggle for democracy in the MENA region has exposed the same weakness of public support for liberal/leftist/progressive groups and forces as it has for women’s rights.

24)  Legitimize women’s rights by making it a political agenda linked to the national struggle for democracy, and by promoting a vision for a just society where women and men have equal rights and responsibilities as citizens under a democratic system and its institutions. Women should bring solutions to political, social, and economic issues as contributions to the ongoing changes and for positioning their organizations within mainstream political activism. Ensure that women’s movements do not live outside the political struggle for democracy.

25)  Expand the space for women’s integration at leadership and activist levels in trade, workers and professional groups, and in academia where alliances can be made to achieve common consensus on hitherto socially non-negotiable issues to establish frameworks to make them negotiable.

26)  Identify and occupy strategic space in the movement for transitional democracy, including transitional governments, and be a political force intrinsic to the processes of democratic transition, not marginal or outside of it. This means mobilizing around common issues of social justice, which impact all citizens and are at the same time integrally linked to women’s rights.

27)  As an entry point and when contextually appropriate, use the contradictions in the existing policies and practices in order to open space for discussions aimed at relating issues to women’s rights.

28)  Use the media in all its forms to inform the public of women’s demands regarding their constitutional rights, and that they are part of establishing a just society.  Keep the public updated on related processes and results in order to build consensus across each country on such rights.

29)  Adopt the principle that if Islam or any other religion is used for formulating public policies that impact all citizens, then, within a democratic context, it is the right of every citizen to discuss and negotiate such formulations. Otherwise, religion and its application should be taken out of public and governmental policies.

30)  Since countries differ in their internal context, and since achieving democratic transition is also contextual, when appropriate, the correct path should be determined as to how to interact with “moderate” religious groups to promote support for women’s rights within the overall democratization of the societies and the promotion of social justice.

31)  When appropriate avoid discourse on religion and focus on building a non-sectarian democratic discourse.

32)  Support women to become religiously literate so that they will understand the progressive religious textual interpretations with regard to women, and be able to deal with the political aspirations of religious parties with clarity.

33)  Bring young women to the struggle for women’s rights. This is more of a challenge than sometimes appreciated. Young people have been in the leadership of activism for democracy, but do they give priority to the objectives of gender equality or do they have other priorities? This requires investigation and much dialogue with young women and men across society.

34)  Build alliances with men. This is critical for ensuring buy-in from all members of society regarding the rights of women in both public and private spheres. The road to full democracy is long, difficult and complex. We need solidarity and unity of purpose to achieve democratic societies built on human rights and equality between women and men.

Thoraya Obaid (Saudi Arabia) is former Under-Secretary-General of the United Nations and Executive Director of the United Nations Population Fund, and currently serves as the Chair of WLP’s Board of Directors. As UNFPA Executive Director, she introduced a focus on culture to the Fund’s development work, linking gender, universal values of human rights, and values of human worth promoted by all religions and found in all cultures. A recipient of numerous awards, in 2004, Forbes named her among the world’s 50 most powerful Arab women. Since her retirement, Dr. Obaid has been residing in Saudi Arabia and in Egypt.