Why Rio+20 Needs the Voices of Young Feminists 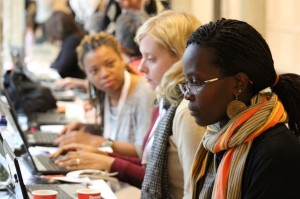 by Bridget Burns, Project and Communications Coordinator  (and Social Media Geek) at WEDO

Just a few weeks ago, I had the opportunity to engage with a number of young feminists from around the world at the 2012 AWID Forum. Some of us had met before, mainly through social media, but among old and new acquaintances alike, there was an immediate sense of community, and a passion to find ways to connect our different social movements together for action. Of all the amazing experiences at AWID, it was the most fulfilling for me.

Going into AWID, I had a vision, a vision I still hold, of a network of young feminists working together to promote a sustainable future. A network which can be mobilized for action at the international, national and local level, working across areas of human rights, sustainable development and global governance– gathering momentum at Rio+20 in June.

At AWID, I gave an interview for the Young Feminist Wire on why Rio+20 is an important space for young feminists (see video below). A key theme of Rio+20 is “Green Economy in the context of sustainable development and poverty eradication”. It’s a controversial topic as many view it as the complete financialization of sustainable development and commodification of nature. In the face of questions and critiques, it is essential to draw upon feminist theories of economic transformation, globalization and measurements and indicators in order to translate a “Green Economy” into a truly equitable economy which will work for all people and the planet.

Outcomes from Rio+20 will help set the development agenda for the next 20 years, and will likely begin a process for creating a new set of Sustainable Development Goals (to replace? build on? work in parallel with? the Millennium Development Goals). This agenda needs young feminists’ passion, energy and activism for change.

At WEDO, in preparation for Rio+20, I have spent a lot of time looking back over the last 20 years and hearing stories about the achievements of the women’s movement in 1992– how it was a time when “women found their political voice”. It can be somewhat frustrating to see that much of what we fought for in 1992 is what we fight to protect today. It begs the question of what really was achieved at Rio.

But then I look back again. I see 20 years of women’s mobilizing for change, 20 years of leaders like Wangari Maathai showing us how the individual actions of many can work collectively to make a difference, 20 years of policy advancement which created language on gender equality and women’s rights across all the Rio Conventions, 20 years of a women’s movement around the environment which has grown and moved itself across all spheres of global governance– so much so that at times it feels  hard to find common space for mobilization and movement building.

I think the achievements, role models, activists, leaders and mentors of a women’s movement which was galvanized around the first Earth Summit in 1992 was a truly sustainable outcome. I for one hope that in Rio 2012, we can make the space to speak to one another, to engage young feminists,  discuss our vision for a sustainable future– and then to commit to work together to make it happen.