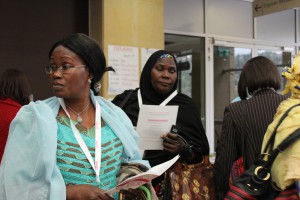 ISTANBUL (TrustLaw) – UN Women, slammed by some activists for not making enough progress to get the women’s issues on the global agenda since its 2011 launch, warned on Friday it may face a shortage of funds for the second year in a row.

The U.N. body, seeking to improve the lives of women and girls around the world, depends on voluntary contributions from donor countries for almost all its funding.

Lakshmi Puri, deputy executive director of UN Women, said the ongoing financial crisis was likely to have a negative impact on funding prospects for the organisation.

“The target for this year is $400 million, and I don’t know how we are going to get there,” Puri told an audience at the 12th International Forum of the Association For Women’s Rights In Development (AWID) in Istanbul. “Particularly (as) some of our biggest donors like Spain are now in such trouble themselves that the space for giving to us will be limited.”

Many experts at the biggest global conference on women’s rights said UN Women needed to do more.

They said the organisation needed to take the lead in championing women’s rights in new developments targets expected to replace the Millennium Development Goals, which are due to expire in 2015.

The MDGs, set by the international community in 2000, seek to improve health and reduce poverty globally.

“We don’t really see UN Women in there or the voices of women being very much at the front and centre of those processes,” Alexandra Garita, of the U.S.-based International Women’s Health Coalition, told the conference.

Another speaker, Charlotte Bunch, founding director of the U.S.-based Center for Women’s Global Leadership (CWGL), said UN Women needed to have a stronger institutional presence – making sure that U.N. country teams and offices were incorporating gender equality in their work.

“We want to put on the table the need for civil society and UN Women to work together trying to figure out some more creative ways both to pressure governments but also to create other sources of money,” she added.

CWGL is part of the Global Gender Equality Architecture Reform (GEAR) campaign that called for the creation of UN Women.

Puri defended UN Women, saying its creation had already made a difference by consolidating four U.N. divisions dealing with women’s issues into one organisation.

But the pace of change was too slow for some.

“At one year old, we would have expected any baby would have started growing teeth,” said one delegate at the session.