Home > Culture & Religion > The revolution should be feminized

The revolution should be feminized 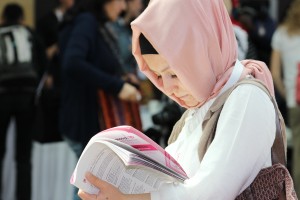 As I was casually browsing the many booths with information and goods from the various women’s organisations at the Association for Women’s Rights in Development (AWID) Conference in Istanbul, Turkey last week, I spotted some T-shirts that grabbed my attention. Although I had already walked past the booth, the message on the T-shirts made me do an about face. Just as I was turning around, a voice from the booth said, “Stella?” The thought struck me as to how unusual it was to hear my name being spoken in Istanbul by someone besides my Guyanese colleague. It was a Sister from Jamaica who is also a Facebook friend and, as it turned out, the person who created the T-shirts that grabbed my attention.

The message on the shirts stopped me because it was obvious it could only have come from a Caribbean Sister. The shirts read, “The Revolution Should Be Feminised!” After chatting with my Jamaican Sister, I bought a T-shirt to hang in the S4 Foundation office as a reminder that any revolution that does not include women is not a valid revolution.

On the topic of revolutions, today in the US there will be marches in many cities around that nation by women (and men who care about women) who are fighting back against the injustices meted out to them. They are taking a stand. They are making their voices heard as their very own government representatives try to take away their reproductive rights. It is sickening to me how something as priceless as a “right” or justice can be used as political tools, as if men should be able to give and take these precious commodities whenever it strikes their fancy.

In America, the women are now struggling for their right to choose when they reproduce. I’m not talking about abortion alone; I am also talking about access to birth control. The desire for men to control women’s bodies seems insatiable. This struggle in the US will have global consequences and the American women cannot fail. They must persevere and win this war.

In the past year in the US there have been a record number of laws passed to infringe on women’s reproductive rights. This is going backwards, but it is true. Decades ago, Margaret Sanger said, “No woman can call herself free who does not own and control her body. No woman can call herself free until she can choose consciously whether she will or will not be a mother.”

In other words, by taking away a woman’s right to choose when she procreates, you are taking away her freedom as well. And to what end? To sate the egos of men who cannot handle the likes of a woman who thinks and makes decisions for herself? Or to hold all women to the most extreme versions of religious theology, even if they do not practice that religion themselves?

It is no wonder more and more women are walking away from religion. There is currently a global revival of extremism in most of the world’s religions and that intemperance is accomplishing one of two things: it is either shackling women even further or chasing them away. Both consequences are not good for religion–or for women.

In Guyana, women won a shallow victory when Henry Greene, the former Police Commissioner accused of rape, retired from his post. The good news is that he is finally and permanently out of that important position. But that is the only good news.

The bad news is that Greene was allowed by the government to subvert the justice system and retain his pension and benefits (paid by taxpayers). This is no real victory for Guyana’s women. In fact, it is the complete opposite of a victory.

Indeed, any revolution that does not include women is not a valid revolution. The opposition and the government can go head-to-head in dramatic fashion all they want, but if they neglect the women and their children in the process, their efforts are counterproductive to the overall health of the nation. The revolution should be feminised!