Home > Culture & Religion > The balance between religiousness and women’s rights

The balance between religiousness and women’s rights 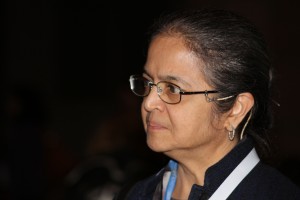 I’m attending the Association of Women’s Rights in Development conference in Turkey. I’m blogging my thoughts here at the F-word. I had wanted to write about each day’s reflection, but many of these topics run every day and my thoughts are evolving through each day. There are over 18 sessions per breakout session so this is specifically my interpretation and what I find important. As a result of my work with Good Girls Marry Doctors, I’ve attended over three sessions on what AWID calls “Religious Fundamentalism”.

For a bit more clarification I don’t practice any specific faiths, so religious fundamentalism is new and interesting to me. Zohra, who is religious doesn’t find this topic as interesting as I do as she has a faith. She explained that the term Religious Fundamentalism is a misleading term. The term fundamentalism is a Christian perspective of going back to the fundamentals, back to the origins or beginning of the religion. In Christian religion, this makes sense when having discussion about the radical religious right. This does not make sense in an Islamic sense because the origins or the beginning of Islam is MORE progressive than it is now. Many people of Islamic faith feel it is more restrictive now than it has been before so some people object to the term fundamentalism.

At the first plenary, a woman talked about Turkish women’s difficult position in being an authentic woman. What does it mean to be an authentic Turkish woman? And being punished for not fitting in that ideal?

The topic of religions fundamentalism is too large to fit in these sessions. AWID really should have made specific cases.
a) The forum was very supportive of women in the sex work industry, but they are feeling the wrath of Christian religious fundamentalist who are attacking their right for descent work.
b) Africa has had had a wave of LGBT cases. Christianity has taken a hold of parliament, and many people who are outted as LGBT have either been jailed, or killed.
c) The control of women’s sexuality

I’m especially interested at the identity issues with these issues. There’s a call for women who want to be feminist and Muslim. There is a yearning to be comfortable to claim both identities. A big problem with cultural or religious fundamentalism is generally only certain people are allowed in the discourse in defining religion or culture. Within fundamentalism, only an elite crowd can interpret the religion or culture, and nobody else is allowed to say anything different. It results in a powered position where only certain people can define what it means to be a authentic woman . Zainah Anwar who heads up Sisters in Islam says that’s not true. Everyone should have a say about their interpretation of Islam, especially if there is not a separation of state and religion and with the practice of Sharia Law. The government has an interpretation, so do the religious leaders, teachers, men and women all have an interpretation. The goal is that everyone should be able to contribute to the conversation so that the individual can choose what interpretation of Islam they choose to have. Thus to be feminist and Muslim does not have to be a dichotomy.

My partner has previously said this to me. We live in a world where it’s easy to criticise Christianity, but we’re afraid to criticise other religions for fear of being racist. Perhaps we all need to be a little educated about different religions so that we are able to critically comment on it.

In some sessions, it’s been an onslaught of violence against women abuses. In day 3 plenary,we had a representative from the Egyptian women’s movement. The military conducting virginity tests on protestors to denounce their credibility to protests (because virginity is where your credibility lies?) where the military brutally beat a woman protesting against the head scarf because she was only dressed in a blue bra and jeans with a head scarf. It makes me think how deeply entrenched are these cultural and religious systems go far to control women’s sexuality?

I have many more thoughts about this, but if I don’t put them down now I’ll forget about them. I also want to talk about cultural relativism (and the situation in Afghanistan), The ability to critically comment on all religions is something we need to have a better understanding.

Other cool things from the session:
• The US Centre for Constitutional Rights (CCR) filed a complaint with the International Criminal Court for victims of sexual abuse by Catholic priests and three other senior Vatican officials for crimes against humanity.