Home > Access to and control of resources > Superhuman social activists

Posted in Access to and control of resources, Labour & Work on November 2nd, 2012 by AWID Staff
Source: Feminaust 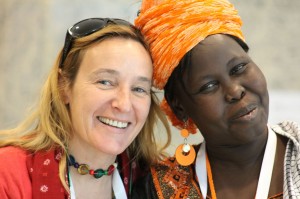 They don’t need to eat, pay rent or any of those boring things.

I was standing chatting to a friend of mine who works with young women human rights activists in South Africa when I witnessed a frustrating, damaging and quite frankly fucking ridiculous event.

The one in nine campaign is a SouthAfrican, membership based sexual rights advocacy group that’s been working on feminist social activism since 2006 in response to Fezeka Kuzyo’s allegations of rape by President Jacob Zuma. In 2011 they launched the Advocacy and Media Production Studio and started training women in design, print production and media. The studio now develops unique and high quality t-shirts, posters, bags, flags, placards and other printed advocacy materials. The studio also takes on print work for other organisations. The one in nine studio team are at AWID forum 2012 selling some of their items at the marketplace and it was here that I witnessed some seriously unfemininst unsolitarityesque behaviour.

The t-shirts being sold are priced at $25 US each. Not cheap, but far from expensive when compared to the commercial garment industry. What’s more, these t-shirts have been designed by the group of South African women who also print and sell them and you can meet some of these women if you visit the stall. For one AWID delegate however, they were far too expensive and she was happy to point this fact out to the stall holders, practically demanding a discount for their clearly over priced stock. As I stood by and watched I couldn’t help but wonder what she thought these women owed her, and what she thought original, evocative and beautifully produced garments were worth.

It reminded me of something a friend had said to me the day before,

Human rights activists don’t need to eat, or pay rent, or care for their families. It’s perfectly acceptable to expect them to volunteer all their time, risk imprisonment and out their families in danger of losing the breadwinner for the cause.

These women are not just activists, they’re trained, professional and talented designers and media producers. They don’t just deserve recognition and support for their activism but also for their creative and practical talents and a social enterprise, that supports and trains women to not just produce potential profit making items but to support the advocacy message of the mother organisation at the same time should be applauded, supported and yes, financially rewarded.

Back in Australia I could easily conceptualise, design and commission the printing of masses of t-shirts with simple advocacy messages. I could then sell them at a profit for probably $15. But, the concept would be basic, the design amateur and the production would happen in a large factory, with no personal care or attention. The t-shirts would probably have been made by small children in China.

When I want something utilitarian and unimportant and quality is not an issue I go to Target or Kmart and get what I need. But when I want something unique or special or if I care about the origin or meaning of a product I go to Etsy, or a designer or a single producer and I’m willing to pay a lot more for the service and the product. Because I know where the money is going, why it’s going there and what benefit it then has, either directly through supporting a worthy group, individual or cause or indirectly by buying second hand and pre-loved and thereby reducing my personal impact on the earth. It’s true, I’m as attracted to a bargain as the next person, but when I substitute cost I know I substitute quality and I own that decision. The idea of standing in front of a producer or designer and telling them to their face that their work is not worth the value they have put on it however makes me feel nauseated.

Essentially what this woman was doing was standing before these women and telling them that they didn’t deserve to pay their bills that week, they didn’t have the talent required for her money or attention and despite the fact that she clearly loved the t-shirts (she kept coming back) she wasn’t willing to pay a fair and decent price for the work.

I applaud the one in nine campaign for having the decency to recognise the value of their supporters and not just creating awesome advocacy and products but rewarding these women by offering them employment and fair compensation for their hard work. All too often social activists are expected to give them time for the love and not expect to be paid for it. Utter crap in my opinion.

To the woman who so disdainfully dismissed the work as unworthy of her dollars, I hope you expect to get paid for your work, I hope fair pay for fair effort are concepts that exist in your life and I hope the effort you inject into your work is half as focussed as that of this group of women. Because I’m a feminist and I value the value of the work of my colleagues, yours included. In the mean time I’m going to continue to support the work of advocates and activists who work to make this world better for all of us with my enthusiasm, my encouragement and my wallet.