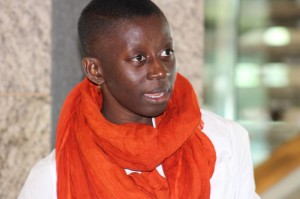 I arrived (very) early on Thursday morning to attend the 4 day Association for Women’s Rights in Development (AWID) forum 2012 in Istanbul. I was immensely excited. This conference is probably the biggest meeting of feminists I have ever attended (aside from the Commission on the Status of Women) – and the most radical. There are over 2,000 activists here from all over the world that have made the pilgrimage to the Forum in the hopes of learning, networking and sharing, building coalitions, increasing solidarity and consolidating action.

I had expected to meet women from all over the world, but even I was surprised to (literally) run into a delegate from Syria (they are enjoying celebrity status here, everyone wants a photo op with the Syrians). Maybe less surprising is an interesting conversation I had with an Iranian delegate who has had to resort to crowd-funding her project (working with children refugees) due to the sanctions. As an Israeli activist it is both unnerving and exciting to meet women activists from places I only hear about in scary news stories. I’m pretty sure they feel the same way about me.

In fact, it seems that the decision to hold the forum in Turkey was right on the money allowing for delegates in the MENA region to easily attend, and more importantly, to put the Arab spring discussions firmly on the agenda. From what we are hearing in the sessions and in the corridor conversations, this ‘Spring’ has not been entirely good for women and girls. In fact, Manal Hassan, a prominent Egyptian Techie, told harrowing stories about women activists who were detained by the military and subjected to virginity testing. When the story broke, the Egyptian military claimed this was done to prove they were not raped at the holding facility. As if it’s ok to rape non-virgins.

Other issues that are receiving a lot of (tweeting?) attention are the intersections of feminism, activism and ICTs. There are some obvious links between undermining hegemonic culture and patriarchy, and the unregulated, open-ended, user-driven nature of the Net. More unexpected however are the ways in which indigenous women are harnessing technology to document and archive their knowledge, and the use of flip cameras in the DRC to capture women’s struggles against violence. In addition, the internet, and social media sites, are being discussed both as sites of resistance and as sites of commodification. The argument being made is that the profit driven nature of giants like Google and Faebook is mediating, disrupting and appropriating user-driven knowledge, attempting to subjugate this knowledge under ownership and privacy laws. This regulation is reproducing patriarchal and discriminatory practices online, stifling the democratic and subversive nature of the web. In addition, the content being generated by ‘users’ is reflecting existing power dynamics – according to a Wikipedia rep, 80% of their articles are edited by men. So the questions we are asking are – where is our feminist knowledge? and how do we share it online without losing its political sting?

As with all feminist struggles, there is a tension between those who believe the master’s tools will never dismantle the master’s house, and those who believe we need to seize these tools to undermine the foundations of the house. This is being played out online where feminists and female bloggers are fighting for voice, recognition and a chance to be at the table. As one panelist said, if you’re not at the table – you’re on the menu. While other feminists say – It doesn’t matter how big your share of the pie is if it’s a poisoned pie. I’m firmly on the side of those who want to be at the table and so I’m sending forth this user-driven blog to disrupt the patriarchal nature of the web. Or something.