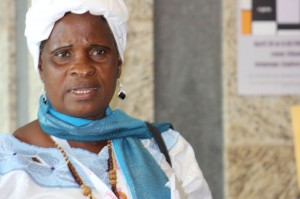 I am Kthi Win from Myanmar and I am a sex worker. I manage a national organisation for female, male and transgender sex workers in Burma and I am also the chairperson of the Asia Pacific Network of Sex Workers. Until now, organising anything in Myanmar has been very difficult. People ask, How did you set up a national programme for sex workers? And my answer to them isOur work is illegal. Every night we manage to earn money without getting arrested by the police. We used to work and organise together, so we use this knowledge in order to work out how we can set up the National Network without making the government angry.

This is the opening of Kthi’s plenary speech last Saturday at the AWID conference in Istanbul; at the end Kthi asked those in the hall – 1500-2000 – to stand and repeat with her Sex work is work! Most people did what she asked; no one protested. I presume hard-core abolitionists chose to stay away from this session. You can listen to Kthi’s speech, too.

I was at this event most of last week, part of a group promoting a vision of sex work, migration and feminism that emphasisesagency, the state of being in action, taking power, making decisions even when presented with few options. We overtly challenged the reductionist, infantilising ideology that has come to dominate mainstream policy and faux journalism (like The New York Times’s) by attending many sessions and commenting.

I spoke at Don’t Talk to Us About Sewing Machines, moderated by Meena Seshu from SANGRAM in Sangli, India. Wi from Empower spoke first about her research into the state of sex work in Thailand; then she showed the film Last Rescue in Siam, which makes fun of police raids on bars where people are harmlessly singing and drinking. Dale from APNSW then showed a clip from a raid in India that shows sex workers physically resisting police ‘rescue’.

Rebekah Curtis of TrustLaw reported the session in The Word on Women – Anthropologist slams raids “rescuing” sex workers, and I am glad she reproduced these words of mine:

Large amounts of money go into these programmes to rescue people who in many, many, many cases do not want to be rescued, she said, adding that many women choose sex work as a preference to jobs such as domestic work.

We’re talking about the ability to recognise that someone else can make a different decision from your own about her economic or mental or emotional empowerment, she added. That if you want to rescue someone you need to know very well first what it is that they want before you rush in to help them.

I hope our interventions in this very large international women’s event have been worthwhile: one never knows.