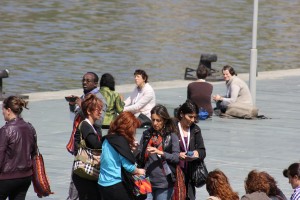 The Nobel Women’s Initiative gathered Istanbul, Turkey with over 2,000 women’s rights activists from around the world for the 12th Association for Women’s Rights in Development – AWID Forum.

From April 18-22, the AWID Forum brought delegates form various grassroots, national, regional, and international organizations together to strategize, network, and learn skills in the effort to advance women’s rights.

This year’s Forum was titled “Transforming Economic Power to Advance Women’s Rights and Justice” to focus on the overlap of economic power and women’s rights:

“Economic power impacts on and intersects with all women’s rights issues and agendas – from reproductive and sexual rights to violence against women, education, political participation and health. Without economic systems that take account of women’s needs and realities and value their contributions, rights and justice are not possible.”  – AWID 2012 Forum.

The Nobel Women’s Initiative proudly sponsored the participation of women’s rights leaders and activists from Iran, Sudan, Burma, and Palestine who attended the Forum to learn about new tools and resources. The Forum provided an opportunity to advocate and organize on important issues affecting their communities.

Forum delegates from Burmese women’s groups spoke out against the systematic rape of women in their country, specifically ethnic minorities, during the panel, “Women Resisting Militarized Development in Burma.” A panelist from the Women’s League of Burma condemned the use of rape as a weapon of war by the government. The Women’s League of Burma will be participating in the Week of Action May 6-13, which will mark the launch of the International Campaign to Stop Rape & Gender Violence in Conflict.