Home > Sexuality > Generations of Feminism – a reflection on AWID 2012

Generations of Feminism – a reflection on AWID 2012 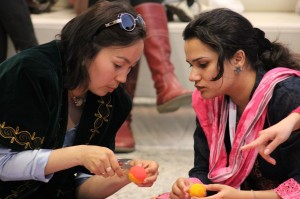 Two weeks ago I attended the international Association for Women’s Rights in Development (AWID) forum in Istanbul, Turkey. AWID hosted more than 2,500 feminists, development professionals, activists and students at a four day forum to share ideas, experiences and plans for mobilization for women’s rights. I met some amazing, inspiring people from many different countries, working on different issues. The ideas that they planted in my mind, the things I had forgotten have made me all the more excited about the work I do on gender issues, and the work I plan to do. In spite of the wonderful experiences I had, there were a few things about this forum that just didn’t sit right, and that seem to me to be indicative of bigger problems within the movement for gender equality, among self-proclaimed feminists.

One would assume that at a forum that is intended to be a sharing of knowledge, an opportunity to inspire one another, there would be no hierarchy among attendees – especially in a feminist space where we are talking about gender issues. I realized over the course of the four days that this was not the case. As was echoed in conversations with my nine classmates who attended as well, there was a very clear generational division. We kept hearing phrases like “We are so proud of the young feminists here today”, or “it was so nice to talk to so many young feminists”. The feeling of being patronized was not helped by the young feminist corner that was set up, and felt more like a play corner. Where was the “old” feminist corner? It became very clear in the speeches during the opening plenaries, as well as in the daily sessions, that the older, more experienced feminists felt that they could not wait to pass the baton on to us young people, contingent on our adequate indoctrination with their version of feminism, of course. I had the feeling that my own form of feminism was not recognized, or was seen as naive simply because of my age. My more radical beliefs about sex workers rights, integration of LGBTQI issues into the global feminist movement and my desire that women with disabilities be recognized within the movement were brushed aside with an attitude that we young feminists just “didn’t yet understand”.

It seems to me so contrary to the feminist movement to silence voices based on the age of the activist. In a setting where the organizers of AWID clearly made a massive effort for multi-national, racial, religious and linguistic representation, why are the voices of young people not given equal importance? As students, it was assumed that any work or activism that we had participated in before starting out Masters degrees just didn’t really count. One of us was even told, “oh you are just a student, you will get it eventually.” In fact, it was the young people who I met at AWID who I found to be the most exciting in their activism and openness to new ideas and collaborations. For example, a woman in her early twenties from Palestine who is fighting for the rights of women with disabilities, a group that continues to be forgotten by the greater women’s movement. Another was a young lesbian from Uganda who works for a very minimal wage on the fight for LGBTQ rights in a country where her very identity puts her in constant danger. Is this not what feminism, and development for that matter, should be about? The people who truly embody their beliefs and work on issues that they themselves feel everyday. It is hard for me to understand why these young women are less legitimate in the eyes of the global feminist movement than some of the “experienced” speakers talking about women’s economic equality and then jumping into their privately hired car on their way back to the nearest 5 star hotel.

Now, this is not to say that the voices of experienced and well-paid feminists are not important. It is every woman’s right to live her life the way that she chooses. But, what needs to be recognized is that we can all learn from each other. Creating space for young voices by providing a ‘young feminists corner’ is not only condescending, but only reinforces the attitude that we as young people can only be heard by each other because we just don’t know enough yet. An older feminist economist, for example, may have something to learn about economic empowerment from a young sex worker activist. AWID should have made an effort to put young voices in the plenary speeches, as well as have sessions run by young people about our ideas and work. The attendees of the conference should not only engage with the issues that they know well and have been working on for years, but should also attend sessions on some of the new issues that are being taken on by young feminists and that are essential in all gender and development work, for example working with men, climate change, and sexuality. Feminism, and the work we do in development on gender issues, should be thought of as evolving, constantly growing to react to the multitude of oppressions that we all agree face women in the world.

Alison Carney is an MA Gender and Development student at IDS.