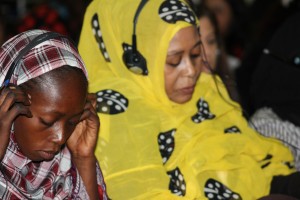 For me, economics are still rocket science, even though I bravely engaged in the session on demystifying economics and macroeconomic policy.. But three more days to come to work on my skills for Transforming Economic Power.
Today started with the economical, social and political power of women in the MENA region. Before the official AWID Forum started, there had been a pre-forum meeting with key actors from this region. The outcomes and dilemmas were shared during today’s first in-depth session on Women’s rights and Transitions to Democracy in the MENA region. This complex and complicated process, where women fought as citizens on the street for social equality and now struggle for their visibility and rights as women in the democratisation process. Orthodox religious movements were identified and their aims to define religion into politics. The fear of the Islamists in the MENA region was a specific focus, also the conservative influence of Orthodox Jews in Israel and the Orthodox Christians in the US were pointed to. From a feminist perspective, the abuse of feminist speech is veryalarming, as dignity and freedom are defined in a strategic way by fundamentalist to win popular votes. These global rise of fundamentalisms was already detected by many actors at the CSW and with its simple messages, this movement contradicts and interferes with important women’s issues as reproductive rights and ownership of the body. From a political and economical perspective, neo-liberal states were linked with Islamists and the dangers of conservative sponsors were shared, that strengthen Islamist parties from abroad.
Another impressive session of today was about migrant womenand their lack of (labour) rights. From experiences of social workers in India, Kenia and Bahrein and views of university teachers in Qatar towards Filipino domestic workers at work in Denmark that are rejected any legal rights or protection. The disturbing contrast between the well emancipated Scandinavian white women (with their equal rights positions) and their own domestic workers that run their households, while they are not granted any rights at all, was critisised as well. And clearly related to the European anti-immigration attitude in these countries, were migrants often are not considered as equals citizens at all. The lack of alliances between (local and national) women’s organisations and migrant movements was brought to light, next to the incredible inhumane circumstances of the domestic and migrant workers in India and Bahrain, who are closer to slaves than employees. All these input and stories led todiscussion on who should take responsibility for what: Receiving or sending governments? The international community? (Transnational) migrant organisations? Women’s organisations? And this viewed in the light of the UN Convention of Migrant Rights, that says that migrants are granted their rights wherever they go. But difficult to put into practise when civil society movements are invisible, not existing or ignorant of the migrant workers situations… The ILO statement on decent work was indicated as a positive development regarding these topics.
To end with the concluding remarks of this session:
build alliances and oppose racisms and exploitation!