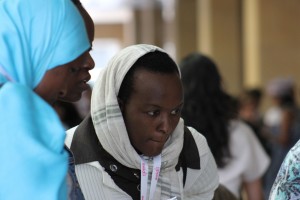 What impact is the rise of religious fundamentalisms having on women’s rights? How are women’s rights activists fighting back? Interesting questions in the light of the developments at international human rights fora in recent years, amongst which the ICPD, the Human Rights Council, current Rio+20 negotiations and the CSW a couple of months back. The latter was a huge failure to the international community, as it did not result in any outcome documents, because agreed language on gender equality, women’s rights and SRHR was contested by conservative states.

AWID launched their Challenging Fundamentalisms (CF) initiative in 2007 to strengthen the responses of women’s rights activists to this growing phenomenon. The research has identified the key characteristics of religious fundamentalisms, examined the factors that help them grow, and detailed how they impact women’s rights across regions and religions. An extensive set of publications and a very inspiring session today at the AWID Forum, are some of the outcomes. Here is a brief tutorial.

To have one thing very clear: Religious fundamentalism is not the same as religion. “Fundamentalism is not about religion as such but it is the political use of religion.” (Gita Saghal). In essence, it denies us the freedom and right to decide who we are. Religion, on the other hand, is also used constructively in civil rights movements, amongst others by women’s rights. Known examples are Women Living under Muslim Laws and Catholics for Choice.

The family, morality and gender roles: people are made to believe that challenging the family is immoral and an act against god. Gender-roles are presented as rigid and natural. Where masculinities have been threatened, these are central strategies: where men have lost power in the public sphere, religious fundamentalisms give it back to them in the private sphere.
How religious fundamentalisms build movements: it is framed as a religious duty to give to charity. By focussing on young people, promising to lift people out of poverty, mass mobilization either of the poorest of the poor, or of elites and intellectuals. Main places of recruitment include schools, colleges and universities, amongst others through changing curricula. Children are used to write anti-abortion letters to politicians. Also women’s supporters are used strategically, and very visible. Women’s rights activists are struggling to understand the paradox of women’s rights violations and massive mobilization of women for religious fundamentalisms’ causes.
Religious fundamentalisms are not irrevocable. In the past decade, more countries have recognized same-sex marriages, legalized abortion and included equality between men and women in laws and policies. What is needed? Alliance building, support by local and international organizations, and being innovative.
Catholics for the right to decide is an organisation that is present in 10 countries in Latin America. The organization has come up with a fantastic strategy to promote renewal of the church: a series of 1 minute films on mainstream tv. Just see for yourself, enjoy and be inspired!
= Joni van de Sand =