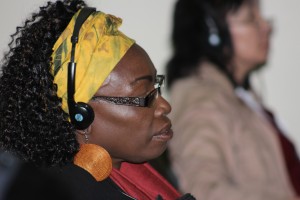 Sunday evening in Istanbul. On my bed in my small hotel in sultanamed and listening to the calls for prayer from the different mosques around. Hard to believe but the AWID conference is over. With a few hugs and kisses we said goodbye to our friends that came from around the world to attend the conference just like us. It is a bitter sweet feeling. It was wonderful to see them all again, but when will Renu from Nepal and I have a chance to cross paths again? Will I get the opportunity to work with Shalini from India on the project we hope to get of the ground?

Anara from Kyrgyzstan, Christelle from South Africa and I, came two Istanbul two days before the start of AWID to work out the details of our panel on the economics of Domestic Violence. We were given a small space with 27 chairs and a time slot which was the last panel in the programme before the closing ceremony. So we were not to sure if we could count on having much of an audience. We decided at the last minute to make some small flyers and handed those out around the forum, and of course we emailed and tweeted the announcement of the panel. At the starting time of our panel at two o clock, a few people arrived but 15 minutes later the room filled up and we ended up having people sitting on the floor and window sills.

In our panel we wanted to hear from the participants how people felt about the interplay between economics and Domestic Violence. When we did a quick canvasing of the room, we found that the participants came from all over the world and many of the worked directly in the topic of ending Domestic Violence. We presented the group with a number of controversial statements such as: If an abused women (or other victim of Domestic Violence) would have access to financial safety measures, she would leave a violent relationship immediately.

After a lively debate we concluded that while a financial safety net can help, especially if a victim/survivor is committed to staying out of the violent relationship. But many other factors play a role. A colleague from Ecuador shared that in his country women are often the main or only breadwinner in the family and due to societies pressures will take care of a husband and partner, even is he is violent and does not contribute to the household finances. In many countries the losing of the important status of married women and mother, is a barrier to leave a violent relationship. Victims feel shame, lack awareness of their rights to live without violence and sometime do not even have access to banking to start saving for financial Independence.
We had a lively debate with all the participants about several other statements. It is clear that many governments are cutting services to victims of Domestic Violence using the economic crisis at a reason they have to cut. As one participant put it “We should not allow our governments to use the excuse of the economic crisis to stop the work to end Domestic Violence”.
The details of our panel will be made available in a report that we will share with all the participants and we even plan to stay in touch by list serv. All the participants agreed, there is not enough sharing of knowledge and developing political messages around the theme of Domestic Violence. On issues like sexual health and rights quite a few international networks and opportunities to do cross boundary learning exist, that is not yet the case for Domestic Violence.
Having such a well attended panel made the whole AWID experience even more fulfilling. Now I can only hope that I will be lucky enough to be able to attend the next AWID forum in 3 years time.
Loeky Droesen

One response to “Economics of Domestic Violence”