Posted in Access to and control of resources on November 2nd, 2012 by AWID Staff
Source: Mama Cash 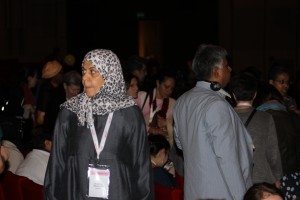 How can we transform economic power to advance women’s rights? That was the broad question for the 2,400 people from more than 150 different countries at the AWID Forum in Istanbul, Turkey from April 19-22. For four intense days participants strategised, shared experiences and knowledge, debated and networked with fellow activists and donors from all around the world.

This year’s theme, economic justice, touches actors across all social justice movements, including the feminist and women’s right movements. In a way, the AWID Forum demonstrated what Mama Cash’s strategic approach is all about: economic justice intersects – in fact, is inextricably interwoven – with other issues like bodily integrity, sexual and reproductive health and rights, and social and political agency.

Mama Cash sees the AWID Forum as an important space for peer learning and feminist and women’s rights networking. That’s why we provided grant support for hosting and facilitating the Forum and invested in bringing both members of our staff and our grantees there. In total, 50 of our current grantees were at the Forum.

In her inspiring presentation during the second day’s plenary, Zoe Gudovic from our partner the Reconstruction Women’s Fund in Serbia said:  “Do I mean money, love, poverty, country, friendship, sex, body, activism, art, housing, war, family … when I talk about economic power? Economic power isn’t just about money, it’s about building relationships.” Her comment illustrates why spaces like the AWID Forum are so important – both for building community and also for providing an opportunity to get a different perspective.

Mama Cash’s Programme Officer for Money Azita Azargoshasb: “Zoe’s comment stuck with me because it gets to the heart of what we aim for in our accompaniment to grantees and in our networking with other donors and actors in different spheres of social justice work: building social networks, opening new spaces and identifying opportunities to mobilise and strengthen.”

Since the AWID Forum is such an important space for women’s rights, it is vital that it is an inclusive space. That’s why we’re proud that many of the grantees funded by Mama Cash to attend the forum, represent groups that have been less visible at previous AWID Forums, like girls and young women, women with disabilities, trans people and sex workers. The Forum gave these groups the chance to unite for a common cause. We were particularly gratified to see the significant presence of sex workers from around the globe at the Forum.

Mama Cash’s senior Programme Officer for Body Esther Vonk: “It is really harmful for the different movements to stay compartmentalised. Many of us are dealing with the same issues. We shouldn’t fight the same fight over and over again. We need to be inclusive and work together.”

Mama Cash collaborated with grantees to organise two sessions to highlight issues that are less visible in the women’s movement.

Our grantee Iz Kruga Vojvodina (Serbia), activist Janet Price (United Kingdom) and Mama Cash organised the session ‘Corporeal Connections – disability, sexuality, work and care’ to discuss connecting feminist disability rights activism and broader feminist organising. “Being able-bodied is temporary for most of us. Disability rights should be at the center of our thinking about economic justice, not in the margins”, argued Janet Price.

And in our joint session with sex worker rights groups from Peru, Turkey, United Kingdom and Hungary, we explored the ways sex workers are affected by economic violence. Ana Luz Mamani Silva from Asociación de Trabajadoras Sexuales Mujeres del Sur in Peru said during the session: “A lot of our problems, like exploitation and police violence, are economic ones, and it’s important that they are recognised as such.”

Accessing funding is both a crucial need and an ongoing challenge for organisations led by women, girls, and trans people who are standing up for their rights worldwide. So it was exciting that for the first time at an AWID Forum, there was a dedicated space called the ‘Resource Mobilization Hub’, for Forum-goers to share fundraising and resource mobilisation challenges, experiences and strategies.

Together with the Global Fund for Women and Astraea Lesbian Foundation for Justice, Mama Cash hosted a session at the Hub called: ‘A Dialogue with Donors and Activists on Funding Women’s Economic Rights, Not Women’s Economic Rescue’. A crowd of 200 people turned up to debate the ‘myths’ that discourage or constrain funding for rights-based approaches.

In our session with the International Network of Women’s Funds, ‘The Present and Future of Women’s Funds: Activists Have the Floor’, women’s funds and activists from a broad range of women’s and feminist movements came together to reflect on what women’s funds have achieved and on what they have yet to do. It is not often that donors and activists can get together, so it was a rare opportunity for donors and grantees to talk to each other.

The AWID Forum 2012 was an inspiring, educational, and at times overwhelming, experience. It was a unique opportunity to take the pulse of women’s movements worldwide and understand how Mama Cash fits – both as funder and actor –  in these movements. The Forum underscored the need to continually refresh the movement, to have a space for reflection and to assess where we are, and where we want to go as a movement.

The Forum closed with solidarity in action: a march through the streets of Istanbul. In solidarity with Turkish and Kurdish women, more than 1,000 people gathered on Taksim Square to demand attention for a wide range of human rights violations against women, girls and trans people. The determination, bravery and passion of so many activists at the Forum was truly inspiring to see and be part of. We at Mama Cash have come back recharged and refreshed.