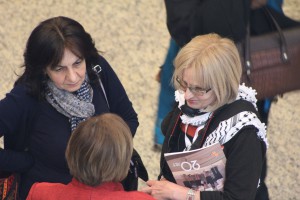 Worldwide, women are largely responsible for managing family budgets, controlling 65 percent of global spending. But, women’s needs are often ignored when it comes to government budgeting, delegates at an international meet in Turkey’s largest city observed.

Over the last 10 years, there has been a growing movement to monitor national, regional, and local budgets and demand changes to allocation priorities to give women their due.

More than 100 countries from Norway to Tanzania engage in some kind of gender-responsive budgeting. Yet, the concept is facing new challenges due to the global economic crisis.

“Investing in gender equality is often just seen as a matter of providing money for the gender ministry,” Lakshmi Puri, executive director of United Nations Women, told IPS at the 12th International Forum on Women’s Rights and Development.

The Apr. 19-22 forum, organised by the Association for Women’s Rights in Development, has been described as a process with a multiplier effect for local and national initiatives as well as strategies at the global level.

Impacts on women of seemingly “gender-neutral” budget investments in transportation, agriculture, education or infrastructure need to get attention, said Puri.

Budget decisions can determine whether a woman in a village has to spend hours each day gathering fuel; if her children can attend a free after-school programme; if she has to pay for private care or whether the neighbourhood bus stop is well-lit enough for her to feel safe.

“You can work hard, you can get laws passed to protect women’s rights, laws passed to improve women’s lives, but if no budget has been allocated for them, they’re not going to be implemented,” Diane Elson, the chair of the U.K. Women’s Budget Group, told IPS.

“Government budgets connect very directly with the everyday lives of women – the taxes they pay and the services they do or do not receive,” Elson said.

Those services are diminishing in both developed and developing countries as financial crises prompt “austerity” cuts, whether initiated by a national government or imposed by an outside institution such as the World Bank or IMF.

“The powerful are able to protect themselves. The military budget doesn’t get cut. Services that help big business don’t get cut.

“What do get cut are the public-sector jobs women often hold, the services they rely on while caring for children and the elderly, even the hospital-provided bedclothes and bandages – that women then have to procure for ailing family members,” Elson said.

Declining tax revenues and individual governments’ shrinking roles in the modern globalised economy led some critics to ask if gender budgeting is still a meaningful tool.

“When you have limited funds is when you really need to look at equality,” observed Mary Rusimbi, executive director of Women Fund Tanzania.

In some cases, the world’s fiscal woes seem to have opened up more space for positive reform. “In Iceland, the government that presided over the financial collapse has been thrown out,” Elson said, noting that women now hold powerful posts as prime minister and finance minister in the new administration.

“Iceland had a referendum on whether the government should take on the liabilities of the banks and the people said no,” Elson added. “More democracy and transparency are being demanded.”

The need to “go deep down into the data” to create gender-responsive budgets “increases transparency and accountability because you have to know where the money goes,” Rusimbi told IPS. “It also raises issues of corruption that haven’t been talked about before.”

Equitable governance is good governance, said Zohra Khan of U.N. Women, which supports gender- budgeting initiatives in 55 countries, including in Mozambique where the group started its work by holding meetings and asking women what they needed.

“At first the men were furious, but we showed them how this kind of budgeting can help them get water closer to their homes and maternity wards built in their neighbourhoods – things that benefit the whole community – and the men got behind it,” Khan told IPS. “This is not about taking something away from men, this is about how local governments can be made more effective.”

The success of such initiatives has pitfalls. Unscrupulous or simply out-of-touch governments may seek a share of international funding for gender equality or attempt to use the concept to burnish their own credentials.

In the Philippines, officials have tried to count any activity in which women participated, including ballroom dancing classes, as “gender development activities,” while in Hungary, equality funds from the European Union were spent to promote anti-abortion campaigns, according to forum participants.

Well-meaning donor organisations can also create problems by just “offering to give a government money to train officials and produce some handouts,” Elson told IPS.

“It’s very different for a government to have the political will to really change how it allocates resources, than it is for it to have the will to take UNDP money for a three-year project,” as happened with an unsuccessful effort in Pakistan.

A better approach is the one taken in Mexico City, where women’s rights activists trained municipal officials and parliamentarians in gender-responsive budgeting; the government has now been carrying out the work on its own for six years.

“If it’s not rooted in what people want, in what women’s groups are advocating for, it can be very short-lived,” Elson said.

Engagement with grassroots women’s groups not only helps improve the success rate of gender- budgeting initiatives, it also provides a way for activists to engage more deeply with economic policies that may previously have seemed distant from their work on poverty, healthcare, education, or other issues.

“It’s very important for us to demystify the budget,” said Maria Victoria Raquiza from Social Watch Philippines. “At the end of the day, that’s our money.”