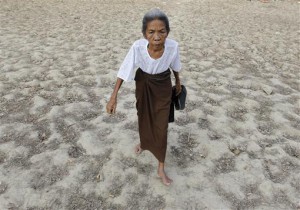 People funding initiatives to tackle climate change effects would channel money towards the worst-affected people, right? And towards those who play key roles in mitigating the effects of climate change?

It certainly sounds logical. But in reality, many donors aiming to help communities to weather climate change often overlook the needs of women. So says Mariama Williams, a senior fellow at the Geneva-based South Centre, an intergovernmental think tank of developing countries.

Distributing funds in the area of climate change “has to have a gender dimension,” Williams told delegates at a women’s rights conference in Istanbul on Thursday.

“In most countries women are very much impacted by climate change,” she said at the conference organised by the Association for Women’s rights in Development (AWID).

The figures say it all. During extreme weather events, more women die than men, she said, citing research by the London School of Economics.

Women are often hardest hit by natural disasters because the effects of climate change exacerbate pre-existing gender discrimination, she said.

Often being chief carers of children and the elderly, women are the last to leave home when a natural disaster hits, she said, adding that women also often have less access to information about natural disasters.

“Having access to good roads and bridges that allow mobility during floods or other extreme events is a matter of life and death to women who are also responsible for children and the elderly,” according to South Centre. “In addition, access to public outreach and early warning saves lives and prevents illness.”

But women aren’t just the worst hit by natural disasters– they are also often the community members who play a major role in mitigating climate change’s effects.

“A lot of the activities that women do in developing countries also are … cheap forms of mitigation that we need to upscale and encourage and put more money in,” Williams says, citing activities such as planting trees.

Indeed, the need to channel more of climate change funding towards women is no-brainer.

In the words of South Centre: “Women’s empowerment cannot successfully and sustainably occur without proactive attention to resolving the challenges of climate change.”

But, first and foremost, the fact is that climate experts and activists still face huge barriers in getting leaders to acknowledge climate change’s gravity at all. Until the world takes on board the urgency of the problem, communities – and especially women – will continue to suffer from worsening effects of natural disasters.

“When we say climate change, it’s not an esoteric thing that is to come, it is happening,” Williams said. “Extreme weather, storms, cyclones… heat waves, floods drought – it’s here, and it’s manifesting itself more in developing countries.”

* A need for programmes that leverage women’s organisations to implement and manage climate change initiatives, locally, nationally, regionally and globally.

* Proactive actions by gender advocates to secure, at national and global levels, new and increased funding for women’s empowerment and gender equality interventions in the climate change arena.

* A need for gender impact assessments in the arena of climate change and a process towards developing gender-sensitive climate change financing indicators. Emphasis should be placed on positive incentives for funds that finance projects and programmes that enhance gender equality.