Home > Access to and control of resources > Dispatches From AWID 2012: Women’s Land Rights Debate Roils On

Posted in Access to and control of resources on November 1st, 2012 by AWID Staff
Source: RH Reality Check 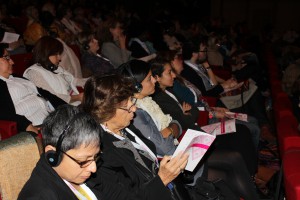 In the past few years, women’s access to land has emerged as a key global development issue. As foreign investment and development in Africa and South Asia continues, and as a global food crisis looms, it has become virtually impossible to ignore the substantial role women play in farming and land management, though they consistently lack rights to land ownership. A panel at AWID today, “Gender-Responsiveness Governance of Land: Women’s land rights struggles, challenges, and lessons,” featured land tenure experts and grassroots organizers from Latin America, Africa, and Europe.

Catherine Gatundu from ActionAid International pointed out that for women, land is a source of both power and dignity. From that source flows numerous other types of power and dignity, from bodily autonomy and sexual rights to economic independence. The right to own land is, quite literally, foundational to women’s rights.

Panelists agreed that the greatest successes in improving women’s access to land in recent years had come through the building grassroots women’s collectives, which advocated for their own rights, and helped change community attitudes and policies in the process. Legal frameworks are critical, but sustainable access to land must go a step further – women must be part of the conversation and the decision making process when it comes to land, and most of all they must be informed of their rights.

Violet Shivutse  from Groots Kenya, discussed a successful program to establish community-wide “watchdog groups” at the village level, which track and protect the land rights of widows and orphaned girls – most vulnerable to land-snatching after their “link” to ownership (read: a man) was gone. The very existence of such watchdog groups —  which include diverse actors like land specialists, village elders, women, and lawyers — has increased broad community awareness of women’s land rights. The groups serve as legal stewards for local women seeking retribution for land grabs, and also help educate women about their rights.

Prof Dzodzi Tsikata from University of Ghana detailed the issue of women’s land rights according to three eras of massive land dispossession:

According to Tsikata, 20 million hectares of African land have been acquired by foreign investors in the last three years. Most of this has been in Sudan, Ethiopia, Tanzania, Madagascar, and the DRC, but she pointed out that smaller land acquisition in other African countries is no less destructive –- for Africa’s agrarian-based societies, land is livelihood, and is everything.

Other key points raised by the panel include:

“I was at a land rights conference and mentioned to a colleague that women are disproportionately affected by land grabs. He said, ‘we’re not here to talk about women, we’re here to talk about land.’ The land grabbing debate is escalating and if we don’t ensure that the debate is not gender blind, it’s a massive problem. Anyone who thinks they are “just working on land” should know that they need to be talking about women.”

Panelists concluded that the struggles of women and land will be addressed when women are put in leadership positions. Dialogue needs to continue on this critical issue.