Arab Spring Becomes a Chill for Women, But The Organizing Continues 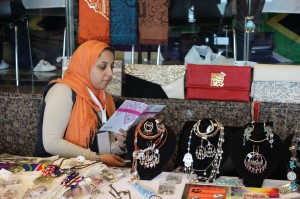 “This year, in the Arab world, discourse changed from a “spring” and a revolutionary moment, to a chilling winter promising a difficult path ahead.” – Ghadeer Malek

It may have seemed rather clear to followers of the news that, while women in the Middle East and North Africa played a prominent role in last year’s Arab Spring, their participation has faded into the background. But that Arab women continue to mobilize became abundantly clear after today’s panel, “Bringing Gender to the Streets: Young women amidst the Arab uprisings,” which featured five fiery young advocates and organizers from across the region.

Panelists from Egypt, Tunisia, Lebanon, and Yemen shared their particular stories, answered questions about ongoing movements – which they portrayed openly and (refreshingly) without conclusion – and provided the critical nuances so often missing from discussions like these.

The women discussed both the specifics of campaigns they’d led to increase the recognition of women’s rights, and also spoke more broadly about how women in the Arab world have largely been betrayed by the democratic movements of which they helped ensure the success. There seemed to be clear resentment among the women of the portrayal by global and Western media not only of the Arab Spring (a “Facebook Revolution,” one speaker said, in air quotes and with a tinge of sass) but of Arab women as being forever oppressed, forever at the mercy of men and Islam, both of which are often characterized as inherently violent.

Ghaida al Absi, a young Yemeni woman from the Kefiaia Initiative (“enough” in English) discussed the safe-streets campaign she helped lead, which was the first time that sexual harassment had ever been discussed openly or documented in the country. A survey conducted before the campaign launch found that 98 percent of girls and women in Yemen had experienced some type of sexual harassment.

“Society accepts it and women expect that they will be touched and talked to. We were trying to change this perspective and turn it into an abnormality rather than a normality,” Absi said.

The campaign included the launch of an open source map to track incidents of harassment. Street harassment is also an emerging theme in Egypt, particularly around the revolution. Essentially, wherever women are taking to the streets – in protest, to amplify their voices and present their bodies in statements against oppression – they are increasingly met with hostility and deliberate harassment to intimidate them.

Activist Engy Ghozlan discussed the novel Harassmap, an open source tool launched to track street harassment and provide women a space to tell the world what was happening to them. There is also an in-person, on-the-ground component to the campaign, which took off after protests ramped up.

“After the revolution, people’s relationship with the street changed – people felt closer to the streets, and they were able to go down and talk to one another – start conversations with doormen, shop owners, and neighbors, saying, ‘We want women to be able to walk safe and with dignity.’”

They have about 300 volunteers, men and women, who make the rounds monthly and sticker stores and venues that have pledged to prevent harassment of women. Yet victim blaming and deliberate harassment continue in Egypt:

“If you’re raped once, and you get into the police station, you’re raped twice and three times with the amount of questions and blame that you get, if your parents didn’t already kill you. You are no longer a victim, you are the perpetrator, you are to blame,” she said.

Activist Khouloud Mahdhaoui, from Tunisia, depicted an even more dismal picture of reality for women in her country. Women were at the heart of revolutions in Tunisia, which successfully ended the Ben Ali regime. Yet in its place, there has been a rise in Islamic fundamentalism and the women who were so instrumental to regime-change are now the target of new oppressions that, in fact, take the country back decades. Women and LGBT groups, in particular, face considerable persecution and marginalization.

“Women were expecting a new society to be built on egalitarianism and real equality. But everything that they suffered through during the revolution – after all that – they are now being pointed at as the culprits. It’s as if it was the woman who was responsible for the unemployment, for the unrest, for all the social ills.  Everything has gone back [for women], it’s been retrogression.”

Sara Abu Ghazal, a blogger and activist from Lebanon, lamented: “I wish I could tell you we’ve had a revolution in Beirut. Unfortunately, that is not the case.” She detailed a series of attempts to organize major pro-rights and pro-equality marches, which primarily failed either because of fractures in the local feminist movement, or the success of political parties to co-opt the marches as stumps for their own agendas.

Women are under attack in the Arab world, but it’s not like how much of the media and Western world paints it – it’s not as simple as Islam = violence and Facebook = revolution. “Women have been in the streets for a long time,” as one panelist put it. The panel was packed, with emotive responses and shouts flying back in forth in Turkish, Arabic, French and English, and running well over time. It’s clear that young Arab women have a lot to say about what’s happening around them, and perhaps more importantly, well into the Arab Winter, they continue to act courageously in efforts to effect change.