Dispatches from AWID 2012: A Day in the Life of a Sex Worker 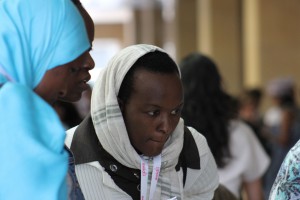 “Everyone in society knows all about ‘prostitution,’ or ‘the big ‘P’,’ but no one knows about the real lives of sex workers.”

So began the session “…7 hours and 55 Minutes: Exploring money and work in sex work,” an educational game designed by sex workers and presented by the Empower Foundation, a Thailand-based sex workers’ collective which supports sex-worker activists, policy analysts, and community leaders to effectively advocate for the rights of people in sex work. (Here’s more info about their work in English).

The game was loud, fun, and completely interactive. It sought to highlight the more mundane and complex issues that faced by people in sex work – most of which have nothing to do with literally having sex – and to portray and normalize sex work as “work,” like any other type. It also explored the financial aspects of the industry, highlighting labor rights and earning power – sub-issues that often get overlooked in these discussions.

At least a dozen audience members volunteered to take on the roles of sex worker, or “mama-san” (madame), police, doctor, pharmacist, customer, and rescue worker – all individuals that play an instrumental role in the daily life of a sex worker. Sex workers were affiliated with “bars,” as they often are in Thailand, which included the rest of the audience in four remaining groups. We hooted and hollered for “our sex worker,” as she rolled the dice and progressed along a game board – encountering real-life scenarios along the way that affected her health and/or her security. Each scenario highlighted the mundanity and complexity of sex workers’ lives – that it’s not all sex all the time – and that they are vulnerable in ways most of us do not even consider – especially where they lack legal protection or regulation in most parts of the world.

For example, one scenario involved sex workers at a particular bar which lacked separate bathrooms from customers, and where sex workers did not get breaks – resulting in the development of a kidney infection for one. Another scenario included a customer refusing to wear a condom and complaining to the bar of the sex worker’s insistence on it, for which the worker was then fined. Other scenarios included police raids and deportation, “rescue raids” from NGOs, and trips to the doctor where they faced stigma because of their line of work.

The role of “rescue worker,” was particularly poignant, as it highlighted what has seemed to be a rift – perhaps too often painted as black and white – between those who advocate for sex workers’ rights and those who fight against trafficking and coercion (as if you cannot do both). The audience member who played the rescue worker was quite tongue-in-cheek about her “good intentions,” hamming to the sex worker she’d rescued as she handed her a sewing machine for her post-rescue work: “you are such a victim you don’t even know you’re a victim. I know what’s best for you.”

While it’s true that “rescuing” sex workers is often a misdirected effort which does not take account of the individuals’’ rights, desires, or reality – and seems to be an odd obsession of conservative men – it is also not that simple. Coercion and trafficking are realities, even if they are often overblown. The game did not raise either of these issues  perhaps in an effort to keep messages simpler and the tone lighthearted, or perhaps because so much of the focus is on sex workers as victims rather than human beings with human rights and agency, that organizers felt it was important to focus solely on the dynamics faced by persons in sex work.

An important point raised in a number of sessions at AWID 2012 has been the way that sex workers’ rights are overlooked within the feminist and human rights movements, as well as by the rest of the world. There are groups who have successfully bridged the apparent rift between elevating sex workers’ rights and voices on the one hand, and also working deftly to promote their basic human rights and respect their agency. Empower Foundation is one of these, so clearly it can be done.

The game concluded with the question, “where does the money go?” a good point that hardly enters into the popular discussion of sex work. After tallying up fees, tenders, fines, and payment for other services, sex workers in the game had come out way behind the police in terms of total earnings. This question of “where does the money go” was considered publicly in Ontario’s Supreme Court last week, when they ruled that it was now legal for sex workers to hire drivers and guards with their earnings, thereby enabling them to use strategies to stay safe.

The game wasn’t perfect – how could it possibly capture the intricacies of such a complex issue – but it was very close, and a valiant effort at raising the nitty-gritty of an industry that remains shrouded in taboos and misperceptions. Perhaps most importantly, it left audience members with new insights and pondering important questions about labor rights, financial security, and sexual autonomy that affect not only sex workers, but all of us.