Development from a feminist perspective 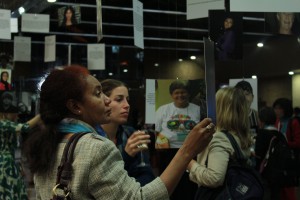 World YWCA staff member Marie–Claude Julsaint, Global Programme Manager for Violence Against Women;, attended the Association for Women’s Rights in Development’s (AWID) 2012 conference on « Transforming Economic Power to Advance Women’s Rights and Justice », in Istanbul, Turkey, from April 19 – 22. The forum focused on exploring issues on economic power and development from a feminist perspective. It was also a space where feminists of all generations could connect, share reflections and network.

Several sessions explored the ways economic power is impacting on women and how this could be transformed to help advance women’s rights and justice, The choice of Turkey was a conscious one, given the so called “Arab Spring” and its impact on women.

Context of the meeting:

Given this grim global context, there is an urgent need to redefine economic power and development. Economic power plays a role in all dimensions of our lives, from allocating household expenditures to national budgets to fair wages, and thus also has an impact on women’s rights issues and agendas, including violence against women and education..

But how do we define economic power? Economic power has come to mean economic growth, a concept that only takes into account the financial aspects of development. How can we achieve growth that is humane? Is it possible to take happiness into account and how?

As we continue to reflect and review the meaning of economic power and development, we must realise that economic justice cannot go without gender justice. The ethical lens of the Human Rights Based approach should be used to challenge economic policies. For example, we need to take into account the whole area of care labour, which is mostly carried out by women, and how work and wealth should be redistributed.

The 2011 Preliminary Results of the Global Survey of Women’s Organisations (December 2011 – January 2012) conducted by the AWID forum, “Where is the Money for Women’s Rights?” raised some concerns. The survey completed by 1,119 women’s organisations from over 140 countries showed that the 2010 incomes of the 740 women’s organisations in this sample audience amounted to a total of approximately $106 million, with one quarter of the organisations with an income of $5.000 or less. Income depended on regions, with the highest incomes found in North America, Europe, and the Pacific, and the lowest in Caucasus, Central Asia, and Sub-Saharan Africa. It was also highlighted that the priorities and strategies of women’s organisation are aligned with those of their donors. although not all organisations are fortunate enough to receive funds from donors. Many live on a month by month basis or have “self generated incomes”, and thus no financial security. The survey shows us the importance of gathering together as women’s organisations to do more advocacy work and encourage the donor community to invest more in women’s organisations, including community-based organisations.

The feminist approach to development looks at and questions power dynamics. What are the power relationships and is there equity? How do we position ourselves vis-à-vis these relationships? Who profits from the current economic power?

There are many alternatives to development, such as the “vivir” concept which values all forms of work, creates collective spaces and agendas of solidarity, respects nature and environmental rights, and reclaims food sovereignty. It is not a one size fits all!

“In addition to creating a safe space for young and older feminists to reflect and revisit the concepts of economic power and development, the AWID Forum provided a strategic environment for women to strategise around the United Nations Secretary General’s proposal to hold a fifth World Conference on Women”, said Marie-Claude Julsaint.