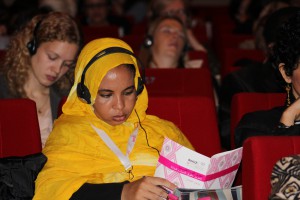 The uncertain fate of women’s rights in the Middle East and North Africa region was one of the most relevant concerns at the 12th International Forum of the Association for Women’s Rights In Development (AWID), held last week in Istanbul. After the Forum, Canadian activist Kate McInturff called on feminists “working at the international level” and those “working at the community level” to break the isolation between both groups, and to engage themselves “in a meaningful dialogue”.

During the forum, activists from Egypt, Tunisia, Syria, Morocco, Libya, and other countries in that region spoke about their ongoing battles to enshrine women’s rights into new constitutions and to increase female participation in new political systems — while often facing renewed challenges to their personal freedoms, reported journalist Jennifer Hattam for the Inter Press Service (IPS) news agency.

“Polygamy has been abolished for more than 50 years in Tunisia, but now we’re talking about it again. Traditional marriages, how women dress, abortion limitations, even female circumcision, which we never had before, are all being discussed. These are all things happening after the revolution,” said Ahlem Belhadj, the president of the Tunisian Association of Democratic Women, focal point of Social Watch in that country.

Creating solidarity with women’s movements in the Middle East and North Africa region was one of the reasons AWID chose Istanbul as the 2012 location for its triennial forum, said on the opening day of the event Lydia Alpizar Duran, executive director of the association.

“In the post-Arab-Spring phase, we need to be clear that what happens in this region has major implications for women around the world. Cultural relativism is growing and we cannot allow respect for cultural traditions to justify the violation of women’s rights,” Alpizar Duran told the participants.

Egyptian women, by example, participated in the uprisings as citizens, not as a special interest group, and supported a national agenda, said Thoraya Ahmed Obaid, chair of the Women’s Learning Partnership for Rights, Development and Peace and former executive director of the United Nations Population Fund.

“But in the aftermath of these events, women became invisible.  And the minute they began talking about their rights as women, they found themselves isolated and alone,” Obaid explained, according to journalist Lisa Anderson, of TrustLaw.

Woman who participated in toppling Arab regimes sometimes think their countrywide struggles should take precedence over stronger pushes for women’s rights, speakers from the region admitted, adding that there can be no democracy without equality between men and women.

Alpizar Duran cautioned, however, that women, especially women activists, face an elevated risk of backlash in many parts of the world. “One of the biggest challenges is increased violence and repression; those struggling for change are becoming targets of attacks,” she told IPS.

The debates at the AWID forum ranged from demilitarization to the rights of domestic workers, religious fundamentalism to climate change, topics covered in the more than 200 different sessions on the conference program, wrote Hattam in her report.

From national budgets to financial-stimulus packages, economic policy typically fails to address women’s needs — or to recognize the contributions they make through their unpaid labor, participants said.

Over the last 10 years, there has been a growing movement to monitor national, regional, and local budgets and demand changes to allocation priorities to give women their due. More than 100 countries from Norway to Tanzania engage in some kind of gender-responsive budgeting.

Engagement with grassroots women’s groups helps to improve the success rate of gender-budgeting initiatives, and it also provides a way for activists to engage more deeply with economic policies that may previously have seemed distant from their work on poverty, healthcare, education, or other issues.

“It’s very important for us to demystify the budget. At the end of the day, that’s our money,” explained Maria Victoria Raquiza from Social Watch Philippines.

“A different kind of gender gap: the feminist gap”

The debate at the AWID Forum “has laid bare a different kind of gender gap […] within the communities of women’s rights advocates working around the globe to make women’s lives better,” wrote in her blog at Amnesty Canada website Kate McInturff, also a member of Canadian Feminist Alliance for International Action (FAFIA), one of the focal points of Social Watch in the North American country.

“Women’s human rights are now on the record. They exist as state obligations. Yet the gap between the world we live in and the world described in these international instruments remains enormous. Unsurprisingly, some women have focused their minds the problem of putting these promises into practice. But implementation often means institutionalization and institutionalization means understanding, at a very specific and technical level, the ways in which bureaucracies function,” added McInturff.

“Equally unsurprising are the number of women who have committed their time and energy to working directly with the women whose basic needs remain unmet, in spite of global promises. They are drawing on their understanding of community level practices and norms to find new ways to negotiate access to food, clean water, property, housing and security for women in their communities,” she added.

The “absence of meaningful dialogue between” both groups leaves them “increasingly isolated, each from the other and both from the power to make change”, explained McInturff. “This failure may leave those working at the international level with no visible constituency to call on when they need to apply political pressure to political leaders. This may equally leave those working at the community level with no means to access policy-makers and resources for their communities. We need to talk, but more than anything we need to listen,” she concluded.