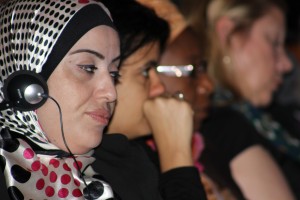 I recently had the opportunity to attend the conference, Looking Forward: Rhonda Copelons’s Legacy in Action and the Future of International Women’s Human Rights Law, co-sponsored by MADRE, the Center for Constitutional Rights, the CUNY Law Review Scholarship for Social Justice, and the International Women’s Human Rights Clinic at the CUNY School of Law. The conference took place on March 31st, 2012 and was broken up into four panels: Sexual Rights Development under International Law; Reproductive Rights at Home and Abroad; Rape as a Form of Torture; and Domestic Implementation of International Human Rights Law. I was unable to attend every panel, however each panelist I heard spoke of their relationship to Rhonda Copelon and her impact on international women’s human rights law and the work they are currently doing.

I had never learned about Copelon’s work before the conference, but am impressed by the extent of her legacy. As demonstrated by speaker after speaker, Copelon was instrumental in the promotion of women’s rights and the use of international human rights law and bodies to defend, maintain, and expand women’s rights over the past four decades.

Throughout the conference I was continually amazed by how much my academic and professional career, and even much of my worldview, was made possible by Copelon’s pioneering vision and use of international law to protect and empower women. More importantly, I was struck by the many connections between Copelon’s work and the work of GNWP on Women, Peace, and Security. I found myself asking, “Would UNSCR 1325 and 1820 even exist without activists like Copelon?” A more fundamental question might be, “Would the current Women, Peace, and Security movement even be possible without the decades of organizing on women’s rights and Violence Against Women that precipitated it?” The answer? An obvious, “No!” The conference made me think of the history of the international women’s rights movement and other pioneers, like Charlotte Bunch, advocating “Women’s Rights as Human Rights” all the way back in the early 1990s.

Copelon, Bunch, and many others, opened up international debates on what human rights really mean, and the expansion of them to include women and other marginalized groups. Copelon specifically worked on issues such as: rape as a form of torture; the responsibility of individual governments and the international community to protect women from rape/torture; and the importance of economic and social rights for women. Copelon was also part of the effort to draft the Rome Statute, creating the International Criminal Court. She wrote extensively about the gendered nature of war, the use of rape during war, and was also part of the Women’s Caucus for Gender Justice that influenced the creation of the Rome Statute. The Caucus eventually became the Women’s Initiative for Gender Justice, an organization monitoring the ICC on gender justice issues. The Rome Statute is considered a major advancement in international law for a number of reasons, many of them related to international women’s rights. It is the first international treaty to identify systematic and widespread sexual violence as a Crime Against Humanity (and in some instances, Genocide). The Rome Statute mandates the hiring of staff with expertise in Gender and Sexual Violence as well as a “fair representation” of men and women among judges, prosecutors, and staff. There are also a number of protections within the ICC to prevent the re-traumatization of victims and witnesses. Check the Coalition for the ICC site for more examples.

Copelon was also a staunch supporter and defender of women’s rights in the United States, promoting the bold use of international law to defend the human rights of U.S. women, particularly their reproductive and sexual rights. For more information, please read her New York Times bio and CUNY Law School tribute. In short, Copelon was such an important figure in international women’s rights that it’s hard to imagine what current debates would even look like without her lasting influence.

As I was listening to the panelists, I was also struck by the realization that although Copelon never -to my knowledge-worked directly on UNSCR 1325, for example, her work on women’s rights and human rights in international law both coincided with and led directly into much of the gains in the last decade on Women, Peace, and Security issues. It wasn’t until the closing remarks of the conference by Celina Romany though, a co-founder of the Women’s Human Rights Clinic at CUNY, as well as the Director of the Center for Human Rights, Inter-American University of Puerto Rico School of Law, that the words, “women” and “peace” were mentioned together. Romany spoke of the importance of women’s involvement in peace negotiations as one area for activists and legal communities to look ahead to, firmly placing Women, Peace, and Security issues within the international women’s rights agenda. I couldn’t agree with her more, and something tells me, neither could Copelon.

Much of Copelon’s underlying philosophies and her advice to other lawyers and activists, as described by Vince Warren, Executive Director of the Center for Constitutional Rights, are directly aligned with current mandates and norms guiding Women, Peace, and Security efforts. Copelon’s novel advice? First, “surface gender.” In other words, analyze an issue through a gendered lens and look at how men and women are affected differently. This practice often reveals inequalities and human rights abuses that were previously invisible. The “gender perspective” mandated by UNSCR 1325, and a major tenet of international NGO organizing in the last 10-15 years, is just one of many examples of “surfacing gender.” Second? “Align with those most affected.” I cannot think of a better definition of “those most affected” than women experiencing conflict.

As our members at GNWP and other women in conflict zones will tell you, and so many filmmakers and journalists have already documented, women and girls bear the brunt of modern warfare. They are absolutely the most affected. Thus, advocating for their rights- not only their rights to physical security and necessary resources, but also their rights to be heard, to be visible, to be included at the peace table, and to be decision makers on issues that are directly affecting them, is clearly in line with Copelon’s approach. Furthermore, by emphasizing women’s participation at the peace table and a gender analysis of conflict, women peace activists and advocates are demanding that the idea of security be expanded from a state and military-centered definition, to one based on the security of individuals. A definition that places the security of women on equal footing with the security of borders and economic interests. Focusing on gender not only necessitates a different concept of security, but it also questions traditional solutions to conflict. GNWP will address these issues this week during the panel “Militarism, Violence, and Conflict” at the upcoming AWID Forum in Turkey.

Listening to the panelists speak of Copelon’s “vision” and her use of international law was inspirational to say the least. The gains Copelon and many others made in the last couple decades have created an international human rights framework that offers important protections, but unfortunately, few results. The same can be said for Women, Peace, and Security efforts in the last decade. In continuing the theme of the conference, “Looking Forward,” we must demand women’s inclusion in peace negotiations by the UN, and that proper funding is allocated for the implementation of UNSCR 1325, 1820, and the supporting resolutions. The laws and mechanisms are there, now it’s time to focus on results.

About the Author: Anna Keye is currently working as a Research Consultant on GNWP’s publication Women Count 2012 Security Council Resolution 1325: Civil Society Monitoring Report.  She is dedicated to women’s human rights issues and wrote her graduate thesis on the women’s movement for peace in Liberia .  Anna has also worked at the economic development organization, Pro Mujer, Inc., and interned at the international women’s rights organization, MADRE.  She graduated from the New School with a BA in Urban Studies in 2006 and finished her Master’s in International Relations from City College in February 2011. Follow Anna on twitter at @anna_keye.