A Call for Economic Justice

Posted in Financial Flows on November 1st, 2012 by AWID Staff
Source: The Mark 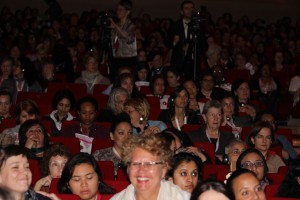 It was a special gathering in many respects. The crowd consisted mostly of women, the majority of whom were from the global South, and we were able to spend four days debating how to change economies to advance women’s rights and further equality and justice.

From the opening plenary’s powerhouse lineup of speakers to more intimate sessions designed to deepen our understanding of the global economy, the message was clear – the economy is a woman’s issue. Current models of economic growth have not resulted in greater freedom or equality for women. In fact, they have hurt women most.

Rebecca Grynspan, United Nations under-secretary-general, highlighted findings from the recently released World Development Report, which this year focused on “Gender Equality and Development.” She pointed out that economic growth has not resulted in increased equality, and that current economic crises are deepening inequality, threatening to reverse any gains made in these areas over the past decade.

While there appears to be consensus that the current economic system is not working, we heard a wide range of suggestions for alternative economic models: from the need to include indicators of “time poverty” alongside those of income poverty to the need to integrate paid and unpaid work into the same indicator. There was a lot of talk of the “caring economy” and the need to measure it. Marilyn Waring, iconic feminist, political economist, and past director of the Reserve Bank of New Zealand, questioned the commodification of every aspect of our lives.

On the first day of the forum, Gita Sen, adjunct professor in public health at Harvard University, called on feminists to take the time to learn about how the economy functions, and to better understand economic policy and its impact on our work and our lives. “Economics is not brain surgery – it is something we can all understand,” she said. “We cannot leave economic policy to those who do not have our interests at heart. We need to learn it and use it.”

And so we did. From geopolitics and the global economy to grassroots solutions, an incredibly diverse group of academics, organizers, economists, bureaucrats, non-profit leaders, and philanthropists immersed themselves in four days of lively discussion. We examined the role of multilateral development banks and were told powerful stories by frontline activists of successful local organizing. We heard about alternatives that empower women and increase their access to resources, such as “lending circles” (an alternative to microcredit) for widows in Indonesia, and indigenous organizing against land grabs in Guatemala.

We also heard about the impact of the financial crisis on funding – Official Development Assistance and European and U.S. foundation assets are all down. And, according to AWID’s forthcoming FundHer Report, although governments and corporations alike seem to be talking about women and girls, there is very little funding actually going to women and girls. And very little of what is being allocated is core funding. Women’s organizations are, in fact, in a more precarious situation than ever. The median annual income of the 740 women’s organizations that responded to the FundHer survey was a paltry US$20,000, and the combined income of these 740 organizations in 2010 amounted to US$106 million – one-third of Greenpeace’s annual budget. Musimbi Kanyoro, president and CEO of the Global Fund for Women, suggested that women collectively take up the call, “Nothing about us without us,” and that we must begin to hold corporations and leaders to account. If they talk about women and girls, she says, then they need to fund women and girls.

Some bright spots were reported. The Dutch government continues to be a model, having invested over 200 million euros in direct funding for women’s organizations. Individual giving is up, too. The Women Moving Millions campaign, chaired by a Canadian, has had 150 women pledge at least one million dollars each to women’s organizations.

I was fortunate to attend the conference alongside a dozen of Crossroads International’s partners, an inspiring group of women from West and Southern Africa who are involved in grassroots economic-development initiatives. In a day of debriefing following the conference, partners reported that they felt full, empowered, and inspired, and that there was a lot more work ahead of us.

The conference ended with a spectacular march down the main pedestrian shopping street in Istanbul, a perfect place to highlight the many challenges and contradictions facing women today. In a country with a growing economy, where only 25 per cent of women work outside the home, women and men from across the globe came together and laughed and danced and chanted, and demanded economic justice and equality for women.