A babsitter’s diary: girl power & hope in the age of the open market 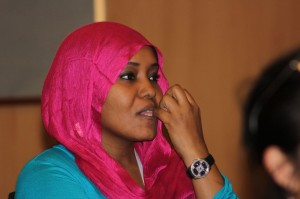 Spring had begun in Istanbul when we arrived last April, a break from the summer that was starting to test people’s patience in Manila.

We had traveled more than 13 hours to reach the former capital of Turkey for one of the world’s largest recurring feminist gatherings of its kind, the Association for Women’s Rights in Development (AWID) Forum.

Zeny Mansiliohan, a 55-year old farmer from Agusan del Sur, and Becca Miranda, a 54-year old community development worker in Nueva Ecjia, gasped at the sight of tulips abloom everywhere, startled and then edified by the commonness.

“The tulips look so beautiful, they can’t be real. They must be made of plastic,” they said to me, their babysitter on their first trip overseas. From the first time they saw the flowers driving out of the airport to whenever they spotted them in the street, their faces would light up like a dream.

Manang (a Philippine term used to address older women as a sign of respect) Zeny is also the vice president, and Manang Becca, auditor of the National Rural Women Congress, a coalition of organizations pushing for the rights of women from the countryside – farmers and fishers, daily-waged laborers, and home-based workers, women whose work are undervalued and sacrifices unheralded. In Istanbul, Manang Zeny and Becca joined 2,200 women from Nicaragua to Kenya, from Nepal to Spain, to confront the struggles of women today.

The theme of the AWID Forum was “Transforming economic power to advance women’s rights and justice.” Composed of more than a hundred small sessions or discussion groups and four major plenaries, the AWID Forum examined the alarming trends in public policies and the worsening socio-cultural norms which oppress, subjugate, and discriminate against women. The global financial crisis of 2008, the recessions in America and Europe, the emergence of power blocs such as BRICS (Brazil, Russia, India, China, and South Africa), and the Arab Spring have created deeper fissures in a globalized but clearly divided world. These changes have led AWID speaker and leading Southern feminist Gita Sen to call this ‘a fierce new world’.

Sen decried the fact that economic power – shaped by neoliberalism or, in broad terms,  ”the total freedom of movement for capital, goods and services” in a global open market (1) –  today means resource extraction, the primacy of financial markets, excessive consumption and unsustainable development. And that “women are at the bottom of wealth production.” Confined in the care economy – giving birth, running households, looking after children and husbands –  women, in the eyes of the neoliberal order, “are only a means to an end.” The idea of the welfare state – public provisioning for social services – is slowly being abandoned, Sen feared, and “the financial world is blackmailing everybody.”

I sat enrapt by Sen’s speech, and almost forgot that beside me were two women whose lives have been formed from this very neoliberal rib of a powerful, mostly male, few.

At the heart of  neoliberalism is trade liberalization, or  the free flow of trade between countries. However, world trade rules are hardly fair. Wealthy countries often subsidize their domestic production such that surpluses or exports, which are taxed little if at all upon entry, are sold at much cheaper prices. Manang Zeny’s guyabano (soursop) fruit trees do not stand a chance in the global market of subsidized industrial apples. Farmers will leave their farms for, so to speak, greener pastures – exactly the thing that Manang Becca did years back. Although she still tends a small farm of vegetables, Manang Becca has had to work as a community development worker to earn her keep.

Privatization is another neoliberal tenet where the state cedes to the private sector the management of natural resources like land and water (and even social protection such as health care and pensions). This partly explains the preponderance of idle lands, said Manang Zeny in her hometown in Agusan del Sur, in Mindanao (southern Philippines): with shrinking government investments in agriculture and the reluctance of banks to offer them loans, farmers don’t have enough seed money to till lands, so leave them unused or end up leasing them to corporate plantations and landlords.

It is also this neoliberal framework which does not value, precisely, the care economy. The Gross Domestic Product (GDP) does not factor in contributions of women – and men and children, for that matter, especially in subsistence agriculture, as pointed out by the brilliant Marilyn Waring at the plenary – in keeping hearth and home, which enables labor to enter, and sustains it in, the market. (There is, of course, caution against the commodification of care work, but that is another story.)

Gita Sen proposed alternative ways to recast economic power in our neoliberal age.  One is to insist and reaffirm the idea which feminism had helped refine – that people, not multinational corporations or banks, have  access to and control of resources.

Another is that power must be built on knowledge, and women must learn the language of economists to be able to beat them in their own game. Women like Manang Zeny and Becca can sharpen their already evident anyway appreciation of how the market works and take on government or private sector market agenda and policy in public discourse. Women must argue for an economics and development framework which is sustainable and upholds the welfare and rights of peoples. For Marilyn Waring, an ecological model of development is the only road worth taking: where development is also premised on a healthy respect for planetary boundaries, and arrest the potential impacts of climate change before it is too late.

This could not have rung more true to Manang Zeny. Over the years, she has seen weather patterns change before her very eyes. She watched as her vegetables surrendered to flood during a (supposed) dry season. For farmers like her, seasonality, or the predictable, periodic behavior of the weather, is the bedrock of her livelihood. Climate change is going to transform food production into guesswork.

It is easy to get depressed knowing all this, and yet, Manang Zeny and Becca showed the opposite at the close of the AWID Forum. They told me about writing project proposals, about sharing what they’ve learned to other women, about moving forward. Renewed by their solidarity with other women at AWID, they are ready to create, as Gita Sen exhorted, half the world that they occupy finally in their image.

There is ever nothing as remarkable as coming away with a feeling that somehow one has the power to effect change. These strong women, who’ve proven their mettle in grassroots organizing and lobbying with local and national governments at the same time growing food for their communities and raising families, have strengthened their agency or individual power, which they need in a world that is sometimes blind to their plight.

I, too, found to my surprise that the AWID Forum included several sessions on the lot of transgendered women.  It was heartening to see space devoted to a transgender like me whose identity, unsettling the popular meaning of womanhood, sometimes relegates me to the background (or to the center, but as a spectacle for amusement) if I don’t raise my voice (hopeful not literally) loud enough. Manang Zeny and Becca and I each face a challenge unique to but are not doomed by our circumstance, class or gender identity. A former professor once said that we may not always be free to fight for our rights, but we are free to hope to be victorious. Hope is power. *

Used with permission from Tul Pinkaew

1Neoliberalism is a contentious term, but for the purpose of this article this succinct phrase by Elizabeth Martinez and Arnoldo Garica was adopted.

Glenn Maboloc is the media and communications officer of Philippines program of Oxfam. The views expressed in this article are hers alone.