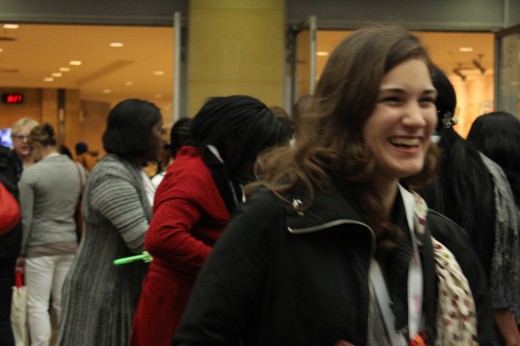 How can we empower women to participate in existing economic structures but transform them? We need a model of economic power and citizenship that is not simply about sustaining capital or growth, but sustaining and celebrating life itself.  Jenny Allsopp reports directly from the AWID Forum 2012. Here are parts two and  three of her report.

How can we transform economic power to advance women’s rights and justice? This is the huge question that 2,500 women from more than 150 different countries were faced with as we headed to the first day of the AWID Forum. The financial crisis is an important backdrop. In the past few years it has swept across the world like a decadent, dusty curtain casting resources here and there with injustice and impunity, and now the time has come for women, who have been disproportionately effected by the crisis, to come together, tie it back and take centre stage. For many women at the Forum the food crisis still threatens daily survival back home, the same food crisis that was both deeply linked to the financial crisis and yet largely obscured in the swift drawing of the financial curtain. As austerity measures ravage communities’ poor and elites engage in capital saving enterprise abroad with tax impunity, women across the globe have been questioning and  interrogating the nature of the social contract from a feminist economic standpoint; they are redefining the notion of economic citizenship and making new demands of the state.

A key question, raised in the morning plenary on ‘Economic power: Why does it matter and how to understand it in the global context’ was, how can we empower women to participate in existing economic structures and simultaneously count on women’s participation as a means of transforming these structures in themselves? As Lina Abou-Habib declared in her opening speech, “we cannot just insert the economic strength of women into neoliberal market agenda; we need structural transformation”. She was echoed by Gita Sen and Maria Poblet: “we are the 99%”. A consensus was already emerging on the panel. What we need is a model of economic power and citizenship that is not simply about sustaining capital or growth, but about sustaining and celebrating life itself.

The issue of fair taxation and its implications for gender equity was raised by Ipek Ilkkaracan Ajas in the morning plenary and explored in more detail in a workshop led by Sandra Kidwingira and Ernest Okyere of Tax Justice Network Africa. It is certainly not every day that you hear the expression, “they want to pay tax”, and for a British woman used to papers with ink dripping with stories of tax avoidance, it was refreshing to think about the right to pay tax as a priority to be reclaimed for women as part of their bargaining power with the state, most importantly with respect to property and assets. Without ‘owning’ anything, such as property, or being paid for the work they do – and therefore being obligated to pay Income Tax – many women nevertheless often shoulder the biggest burden in terms of consummation tax. In many respects this is an indication of women’s marginalization and exclusion. It is only as movements such as the campaign for a Financial Transaction Tax and Occupy have gained strength in the last couple of years that tax has gained global prominence as a mainstream social justice issue, and one with crucial gender implications. The workshops reminded us of tax’s importance role in the field of governance, as a kind of “virtual social fiscal contract”. Yet this is clearly the ideal. As Gita Sen articulated in the morning plenary, we live in a “fierce new world in which social contracts have been broken”.

Tax justice today is threatened by domestic threats such as opacity surrounding collection and spending of tax revenues and complexity of tax codes (often as fallout from colonial structures as one Jamaican participant pointed out). Taxation is also a process that acts upon in differential and often highly gendered ways. The sectors that enjoy tax incentives are also rarely beneficial to women and employ few women. These tax incentives are also often at their expense. Sandra explained that in many countries this was a particular issue with tax incentives to cash crop production, which stand in direct competition with the food crop sector dominated by women.

Tax can nevertheless also be used as a tool for gender empowerment, through affirmative action for example, as practiced in policies in certain parts of India; yet tax systems can reproduce gender inequalities. Gender biases in tax system can be explicit, with specific regulations that treat men and women differently, such as for property or assets which are exclusively linked to men in some parts of Africa, or implicit, such as differences in paid employment, women’s work in the unpaid care economy, and differences in consumption across gender. Participants appeared to concur; tax – through its governance, collection practices and impact – is an important aspect of women’s economic empowerment. One participant handed out leaflets in the form of 100 dollar American bills as we left, “in social justice we trust”.

Afternoon workshops on ‘Women Transforming the Food System’ and ‘Gender-responsive Governance of Land’ provided additional insight, mostly from women engaged in agricultural activities, into the role of tax exemptions in perpetuating a wider trend of government initiatives to attract foreign investments onto land at the expense of local people. On this backdrop, the consistent failure of governments to engage women in local and national decision making structures appears to have led many women engaged in food production to question the basis of the social contract, or at least to push for a renegotiation of key terms. These key terms include the very notion of productivity and ‘capital’ and feed into core debates about the care economy.

Mwanahamis Salimu, Campaigns and Advocacy Officer for Economic Justice for Oxfam Tanzania, and part of a cohort of women “dressed in purple symbolising women’s struggles and also life”, stressed the need to not just convince the government of the important contribution that women make to the economy through their role as both feeders and carers, but also to convince women themselves. As part of their local campaign work for the ‘GROW’ campaign they have been asking households to fill in a questionnaire asking ‘how much do women produce?’, and ‘what challenges do they face?’ The aim, applauded by participants at the workshop, is to bring the debate from the Forum into the family sphere.

Maria Mateo, a Guatemalan Mayan activist and founder of an alliance for rural women, stressed the need to move beyond a “system of exchange” economic model and develop a more wholesome concept of economy and economic citizenship. Anjela Miles from the International Feminist Network for the Gift Economy echoed this vision, calling for a shift towards “production for use and not exchange” and for an economy that is organised “in connection with our society and spirituality”. It is not a question of sustaining growth, she said, but of “sustaining life”.

Maria’s inspiring comments took me back to Gita’s impassioned speech earlier in the day, and in particular to her repetition of the word “blackmail”: we mustn’t accept “blackmail” from multinational corporations. Women must stay active in the countryside, at the heart of food security. To echo the words of Maria, “if women cannot be here then they will be nowhere. Economic development needs to happen here, as the multinationals know all too well!” Yet what such development looks like, and how it is practised still appears “up for grabs”. A key challenge women face is persuading policy makers to visit projects on the ground, and to encourage women to take up positions in local governance. In Nepal more than 75% women are engaged in agriculture and contribute more than 60% of total economy. Out of 8,150 civil personnel in agriculture sector, only 6% are women.

More equitable tax systems, a definition of productivity that is able to sustain the diverse contributions of women and women’s leadership: it seems that a renegotiation of the social contract is overdue,  and it is time that states listened to women working on the ground to develop a new and more aspirational model of economic citizen. As I heard three different people say at various points in the day, “economics is not rocket science”. It is therefore time to direct economic analysis and policy making away from the ether and towards the efforts of grass-roots women on the ground. Women all over the world are tackling the “blackmail” of multinational corporations and showing the world that investing in women’s rights means investing in a transformed system and the sustenance of life.