Home > Militarism, Violence & Conflict > Where we must stand: African women in an age of war

Where we must stand: African women in an age of war 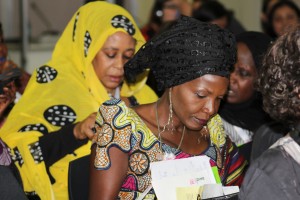 Whether one considers the direct effects of military rule and conflict on women, or the global economic implications of the US war-on-terror, militarism threatens to strip away all the 20th century gains in women’s rights, dispossessing us once more. African women must take a stand, says Amina Mama

(Read this article in Italian)

The anniversary of 9/11 has filled the US-dominated media with action replays and detailed excavations of the events surrounding the attacks on the World Trade Centre and two other targets. More critical thinkers, such as Noam Chomsky, Arundhati Roy, and Robert Fisk, for example, have problematized the ubiquitous Western rhetoric of ‘terror’. This rhetoric justifies and underpins the massive military spending on a potentially endless global war, executed all over the world in the name of a narrow US-centred security doctrine. US feminist philosopher Iris Young also takes issue with these alarming developments, homing in on the ‘masculine logic of protection’ that provides ideological grist to the militarist mill. How do we, as Africans, make sense of this unprecedented escalation? How is it affecting Africa and African women in particular as we work to end war, re-build societies and economies already ravaged by years of conflict and military rule, and struggle to establish open and inclusive democracies?

Anti-militarist activists around the world have traced the links between militarism and capitalism ever since the highly decorated US Military General Smedley Butler published a powerful anti-war statement ‘War is a Racket’ (1935), in which he bitterly acknowledged how his outstanding military service had effectively cleansed the way for private profiteering in the colonised world – Mexico, Dominica, Cuba, Haiti, China, and “half a dozen Central American republics”. Years before Butler, feminist anti-war activists – Virginia Woolf among them – drew links between war and the male domination of political and economic arenas. Woolf may not have been fully aware of it, but she wrote The Three Guineas (1937) at a time when African women were losing sons, fathers, and husbands conscripted and recruited into colonial armies, dispatched around the world to fight for their European masters. Myron Echenberg’s Colonial Conscripts: Les Sénégalais Senegalais in French West Africa records over 175,000 French West African conscripts fought in the First World War, of whom at least 30,000 died in the trenches. In the Second World War too there where huge numbers of French West African conscripts, with as many as 20,000 participating in the allied landing of 1944 alone. The British also utilized large numbers of Africans, as the living memories in many communities confirm. Less well documented is that fact that those who returned did so as militarised men who saw Africa’s future in ways that reflected their training in all-male colonial armies. A detailed excavation leads us to see historical connections between colonial militarism and our post-independence proclivity for coups and civil wars, such that by the mid-1970’s more than half of Africa was under all-male military regimes. These rulers continued the exploitative colonial practices of serving transnational corporations instead of African people, looting national resources and stashing their profits away from public scrutiny in Western banks.

Many wars and several genocidal episodes later, the link between male domination, corporate profiteering, and militarisation holds true on both sides of the Atlantic. Women of the African diaspora in the US (its ranks regularly replenished by refugees from postcolonial conflicts) live the implications of these connections, as public services and social protections are cut, plunging more Black and ethnic minority families into deepening poverty. Their sons have limited options – large numbers facing jail terms or military service.

In early July this year, in the midst of the largest military spend in human history, the Watson Institute at Brown University released their research report on the costs of US wars in Iraq, Afghanistan, and Pakistan. Catherine Lutz and her colleagues reveals the same link between corporate interests and militarism. Among the facts they present:

– US military spending has reached an all-time high, with Iraq Afghanistan and Pakistan alone costing between $2.2-2.8 trillion so far.

– Most of this money has been borrowed, contributing significantly to the US’s larger-that-ever debt burden, and the US financial crisis.

– While the recession has taken its toll, military contractors have profited from significantly more public money, amounting to over 400 billion received in contract in 2008, their highest levels since World War II…Lockheed Martin alone received $29 billion in Pentagon contracts in 2008.

Lockheed Martin’s contracts draw significantly more public funding than the Environmental Protection Agency ($7.5 billion), the Department of Labor ($11.4 billion), or the Department of Transportation ($15.5 billion). This boom in money to private military contractors should not be viewed as separate from the US economic crisis, or the raced and gendered patterns of profit for some, pauperization for others.

Africans on the other side of the Atlantic excavate a different set of memories, not featured on CNN. On the African continent, 9/11 was preceded by the direct bombing of US embassies in Dar Es Salaam and Nairobi three years earlier, on 7 August 1998, leaving 258 dead and over 5,000 injured. African memories include the US retaliation – the cruise missile attack on a pharmaceutical factory in Sudan on 20 August 1998, number of casualties unknown. In other words, Africa was included in an escalating US war that respects no sovereignty but its own before 9/11.

Military power in Africa has been re-shaped since, in ways heralded by the launch of the US High Command for Africa, aka AFRICOM, Oct 1 2008. AFRICOM was designed to centralise US counter-terrorism operations in Africa, to ensure effective pursuit of US security interests defined to include securing access to African resources, notably oil. African governments and civil society initially responded by raising objections loud enough to keep AFRICOM head office in Stuttgart and force a change in the public relations strategy. AFRICOM has been re-packaged as a more collaborative and diffuse set of ‘joint operations’ that emphasize ‘training peacekeepers’ ‘humanitarian assistance’ and training exercises for African military forces. The dedicated website somewhat incongruously features US military personnel digging wells, offering medical assistance and reading to schoolchildren.

What must women do?

As military assistance looks set to displace old-fashioned development assistance, it behoves us to ask what this means for women. Women in Africa have endured the worst aspects of militarism in a long series of military regimes and conflicts that have wrecked lives, displaced countless families, disrupted livelihoods and left legacies of loss, abuse and violence and gender inequality that are both visible and indelible. Whether one is talking about the so-called ‘blood diamonds’ in Sierra Leone, the curse of ‘black gold’ in the Niger Delta, or the rapacious quest for coltan in the Democratic Republic of the Congo, the link between conflict and minerals sought after by transnational corporations is clearer than ever, as are the greatest human costs.

The costs to women have included loss of livelihoods, disrupted by violence, dislocation and other consequences of militarism. It has also cost women many of their fundamental rights as citizens whose definitions of security extend beyond declared ‘cessation of hostilities. Peace has not yielded the much hoped-for dividends to women. If we listen to African women’s perspectives on security, forged in the cauldron of conflict and military rule, we hear that these include economic and livelihood security as much as security from violence, security in their own homes as much as security from marauding military men.

Feminist activists working against conflict and militarism in Africa bring these together to rethink the meaning of ‘peace’ and ‘conflict’, and to enhance women’s movement capacities for contributing to democratization and social justice. This is the agenda now being pursued by ABANTU for Development, the Mano River Women’s Peace Union and the Women’s Peace and Security Network, and other partners working in an activist research collaboration ‘Strengthening Women’s Activism Against Conflict and Militarism’ (SWACM), launched in Liberia, Sierra Leone, Ghana and Nigeria’s Oil Delta a year ago. It is an agenda that women across Africa articulate, inspired as we are by our collective survival through decades of conflict and military rule, and the accumulated experience of mobilizing for peace and equality.

If the US war on terror is the ‘father of all wars’, Africa’s conflicts are his angry and rebellious offspring, sharing the same disrespect for borders and the close connections to private profiteering. Open conflict is only the surface eruption of much deeper-seated contradictions, vivid ulcers on the skin of an unhealthy body politic governed by a militarist mindset. The roots of these eruptions include complicated webs of economic, cultural and political malaise. Militarism is not just about men with guns, or wars, or the blistering legacies of the past. It lays out a future ordained by economic decisions that neglect social development and justice, and perpetuate the stark stratifications and gendered inequalities that militarism at once relies on and perpetuates.

All this gives African women particular cause for concern. It tells us why African women must take a stand in the transnational movement to dismantle militarism. Whether one considers the direct effects of military rule and conflict on women, or the global economic implications of US war-making, militarism threatens to strip away all the 20th century gains in women’s rights, dispossessing us once more. African women have good cause to renew their struggle for peaceful, radical, creative, and ultimately solutions that will bring social justice considerations to the fore once again, and finally understand that security cannot be built without women, without economic and social justice.