Home > Plenary 1 > Visible players: the power and the risks for young feminists

Visible players: the power and the risks for young feminists

Posted in Plenary 1, Plenary 2, Plenary 3, Sexuality, The Role of the State on October 29th, 2012 by AWID Staff
Source: Open Democracy 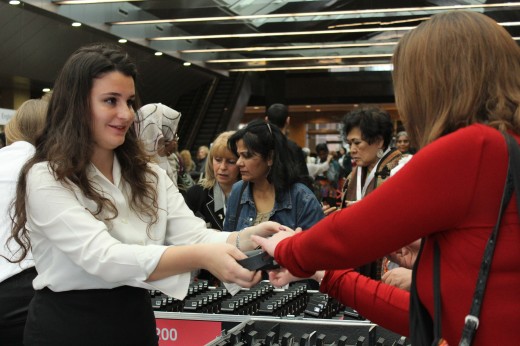 From the student protests in Chile, to the protests of the ‘Arab spring’ in the MENA region, the debate among young feminists about how to reclaim public space reveals tensions between an individualist model of autonomy and a collectivist reclamation of public space. Jenny Allsopp reports on day two of the AWID Forum 2012

A concept that has framed several debates over the last two days at the AWID Forum is that of “visibility” and “invisibility”. We have heard that women’s contribution to the economy is often invisible, that economic power manifests itself in “visible”, “hidden” and “invisible” forms, and, as feminists, we have been called by both Lina Abou-Habin and Boaventura de Sousa Santos to reach beyond the feminist movement in order to be “visible players” in the wider movement for economic justice. Two breakout sessions yesterday, ‘Bringing gender to the streets: young women amidst the Arab uprisings’, and ‘Rebellious young women inherit their mothers’ and grandmothers’ wisdom to gain autonomy’, brought home both the power and the risks that such visibility carries for feminist activists across the globe, as well as the controversy surrounding different ways of “making oneself visible”, or of being exposed.

The panel on ‘Young women amidst the ‘Arab spring’ presented a range of views from young activists from the MENA region. The importance of finding a space in which to express themselves – spiritually, politically and physically – is at the heart of their struggle. Khouloud Mhdhaoui, a Tunisian activist, spoke of the challenge of bringing a “queer” underground movement for LGBTI and women’s rights into the public arena in a country in which queerness is rendered invisible and illegal. For Egyptian activist, Engy Ghozlan and Yemeni activist, Ghaidaa Al-Absi, the struggle was simply one of finding space to walk in the street without facing sexual harassment. 98.5% of women in Yemen have been victims of sexual harassment in the streets, and yet the ‘Safe Street Campaign’ led by young gender activists, is the first time the issue has been debated in the public sphere. For Engy, working on ‘HARASSmap’, a similar campaign in Egypt, the struggle is about combating sexual harassment as a tool, wielded by both individuals and the state, as a means to keep women off the street. The abuse of female activists, young and old, in Tahrir Square during the Egyptian revolution was part of a much wider trend, she argues, “we need to get rid of the criteria that people set for women to be in the public space. We want to be able to walk with dignity, to walk free”.

Yet the issue of “reclaiming space” is not an uncontroversial one within the feminist movement, and a presentation by Sara Abu Ghazal, a young Lebanese activist of Palestinian origin, suggested that tensions between an individualist model of autonomy and a collectivist reclamation of public space were explicit in feminist activism during the Arab Spring. Sara highlighted the broader paradox inherent in responses to the publication of a naked photograph by Egyptian activist blogger, Alia Magda al Mahdi; the treatment of women such as Samira Ibrahim who were forced to undergo virginity tests by Egyptian authorities – a process which most panellists appeared to concur was a form of rape –  and the publication of a photo showing the dead body of a Syrian feminist activist. Drawing attention to the wide but overwhelmingly critical reception of Alia’s photo – 5 million views in 48 hours according to one participant – Sara explored the challenges that this autonomous act posed for the wider liberation movement: “should this be considered as a feminist case, a freedom case, should we support her, is this part of the movement?” This discussion echoed the tension raised by Boaventura de Sousa Santos in the morning plenary as a key challenge for the feminist movement. Arguing that “there is no transformation without individual transformation”, he stated that the “body is at the frontline, the primary territory”. Participants appeared divided over whether this act of claiming ownership of one’s body as an act of individual empowerment was something that could threaten, coexist alongside or strengthen the movement for women’s rights in the Arab world, economic and otherwise. As one participant explained, “the photo made us challenge ourselves and raised questions of identity politics. What are our societies, what are our values, what are we willing to accept as ‘Arab’? How can we define ‘woman’ in relation to that identity?

In the session on “Rebellious Women”, led by the World Walk for Women ‘Marcha Mundial de Mujeres’ from Chile, the issue of public space and the difficulties in reconciling the often radical and individualistic statements made by young feminists surfaced again, this time in the context of the student protests which occupied establishments and public spaces all across Chile in 2011. These were protests led by youthful activists and met with violence on the part of authorities. It was a movement characterised in the global press as a revival of young activism, as manifested in the wide coverage afforded to the charismatic 24 year old leader, Camilla Vallejo. This “new wave of energy” carried forward by “14 and 15 year olds in the streets calling for their rights” posed a new challenge to the intergenerational politics of the feminist movement. Rocio Ivonne Alorda Zelada, the Chiliean activist leading the session, explained how the fearlessness of this generation can pose a challenge to older generations of feminists.  Part of this relates to different historical experiences of oppression. In the context of Chile, there is a perception that the new generation “is more fresh because they have lived less damaging experiences. They have not lived through dictatorship”. This is both a source of celebration and a source of caution on the part of their elders.

Referring back to the panel on the ‘Arab spring’ earlier in the day, a woman from Mexico, who self-defined as “one of the older generation of feminists”, talked of a tendency among older activists to want to protect the younger generation, to make them less visible. New technologies mean that the risks taken by young activists have different forms. There is a tendency among older feminist activists, she said, to look at younger feminist activists and call out at them, “get that technological miniskirt off!” The issue of security and its relationship with autonomy is a complex but important one that was widely discussed in both sessions. As stated by Lina Abou-Habib in yesterday’s plenary, violence against women human rights defenders is perhaps “the threat to the political sustainability of our struggles”. The persecution of women human rights defenders is a core theme of the conference, and one that we will all commemorate tomorrow night with an evening Tribute to feminist activists and women human rights defenders who are no longer with us.

Yet these diverse and daring women are taking risks, and as one young activist told me “we know it all too well”. They are walking into clouds of tear gas, stepping out into the streets to confront sexual harassment,  and physically occupying space, from Tahrir Square to Chilean schools. Through engaging SMS technology and web maps in their anti-sexual harassment campaigns, young women  across 24 states, including Egypt and Yemen, are also virtually reclaiming public space. They do this through mapping, steering the issue of harassment away from invisibility and plotting for the world to see.