Posted in Sexuality on October 25th, 2012 by AWID Staff 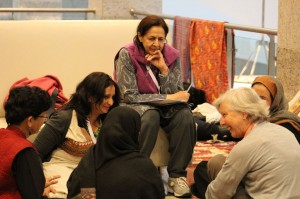 The current dominant economic system has profound impacts on women’s sexual and reproductive rights and LGBTQI rights—including and beyond the commodification of sex, sexuality and women’s bodies. Times of economic crisis often lead to even greater attempts to control sexuality and further limit access to sexual and reproductive health services and rights, especially for women living in poverty and other marginalized groups. Economic and development policies are highly gendered and heteronormative; they are part of social mechanisms to control and regulate people’s sexualities. The dominant vision of the intersection between the economy and sexualities is most commonly associated with problems and reduced to sex work, pornography and trafficking. This limited vision renders invisible key dimensions of sexuality that both affect and are affected by economic systems and relations.

These dimensions include, for example, the prevalence of sexual and gender-based harassment and policing in workplaces. New social media as purveyors of sexual and gender stereotypes and exploitation as well as sites of sexual and gender experimentation and transgression. The ways in which controversial issues relating to sexuality are used to obscure public debate on economic policies or practices e.g. tabling policies restricting sexual rights that also serve to distract attention from trade agreements under negotiation or cuts being made to social services. The limitations of efforts to cope with the HIV and AIDS pandemic, the stereotyping and discrimination that some HIV and AIDS programs have fostered and the gender-blindness of many existing responses.

What are the economics of desire? For example, how does the mainstream media and advertising target certain populations to stimulate and profit from desire? What are effective ways to break the silo that places sexuality outside of economic and development debates? How can strategizing to advance sexual rights take into account influencing economic policies at different levels? To what extent does the disconnect between sexuality and economic policies impact gender equality and the advancement of women’s rights? Can sexual rights be a useful framework to inform economic and development policy so that policies are more focused on pleasure and not only on harm?