Home > Labour & Work > Reclaiming care as a fundamental end in itself

Reclaiming care as a fundamental end in itself

Posted in Labour & Work, The Role of the State on October 31st, 2012 by AWID Staff
Source: Open Democracy 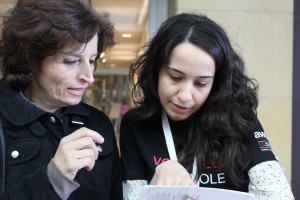 Emily Esplen.
The benefits of getting women into work have been widely acclaimed in donor circles, popularised by the World Bank’s catchy slogan ‘Gender equality is smart economics’. For feminists who have long been advocating for women’s economic independence as a fundamental cornerstone of women’s liberation, the current preoccupation with stimulating women’s income-generating capacities is surely a trend to be embraced?

In some ways, yes. Research has shown that across very different contexts women’s ability to exercise control over their lives is linked to being able to generate regular and independent income. But what is invariably overlooked in the drive to get women into work is the reality that women in all parts of the word are already working long, arduous, invisible hours in the care economy – work on which the market economy fundamentally depends. Yet, the aid industry has completely failed to account for or redress women’s existing unpaid care workloads; instead, the task of earning an income is simply ‘added’ to women’s already weighty portfolio of domestic obligations.

Providing care can be a source of great pleasure, fun and fulfilment. But it can also be a terrible burden that curtails women’s opportunities and choices, reinforcing their subordinate position in the labour market and limiting participation in public life. More affluent women may turn to the market to free them from the more burdensome forms of care – paying domestic workers to perform for remuneration the tasks that other women perform for free. Yet, in the absence of public services, women who cannot afford to pay for care for dependents are often unable to take up paid work, or find themselves restricted to low paid, low-status and part-time jobs, such as home-based or sub-contracted work.

This may offer a good compromise for women coping with the double burden of care work and paid work. However, the fact that self-employed or home-based work is largely unregulated means that the pay and working conditions are often extremely poor and there is no compensation for sickness or maternity leave. Juggling paid work with care work also leaves many women suffering chronic time stress, effectively working a ‘double day’.

Far from being new concerns, women’s unpaid care work has long been the subject of critical feminist scholarship. Yet now more than ever they are taking on a new urgency in the light of emerging ‘care crises’ in many regions of the world. At the root of these crises is the decreasing availability and willingness of women and girls to do unpaid care work – linked to positive trends such as rises in female labour force participation and girls’ increasing school enrolment.

At the same time, the need for care is escalating. Rapid population ageing in middle- and high-income countries is creating a huge demand for care services for older people. Greater commercialisation of health care and a heavier reliance on private payment and user fees is making institutional health care unaffordable for many, pushing the burden of care back on the household. Faced with lower economic growth and surging food and energy costs, governments are slashing public expenditure on essential services such as social welfare, including here in the UK where cuts to child benefits and child tax credits are disproportionately hitting women.

In most households, it is women and girls who make up the shortfall created by budget cuts and market failures. In today’s global context of economic insecurity, there is a real risk that the development industry becomes complicit in compounding women’s burden of unpaid care and entrenching traditional gender roles by relying on women’s unpaid work to get poor people through hard times. This is something we absolutely must guard against.

Development policies and programmes should play a crucial role in de-feminising care by seeking explicitly to expand women’s choices and opportunities rather than restricting them only to traditional gender roles tied to motherhood and the domestic domain. One strategy is engaging national governments to invest in subsidised, high-quality public care services to enable women’s more active presence in the public sphere. Involving men in ways that break down gender stereotyping and open up possibilities for men and boys to take on an active caring role can also destabilise assumptions that care work is the domain of women and not men.

However, many women do not want to be ‘liberated’ from the social obligation to provide care; rather, they want recognition and support for the care they provide. Radical changes in the value that society accords to care are needed, so that carers – unpaid and paid – receive the recognition, respect and material support they need to carry out their work without undermining their rights and dignity. This requires major structural and institutional changes, including shifts in how governments allocate their spending so that public investment serves the needs of those engaged in care work – for example, through the expansion of social services or the provision of cash transfers or tax credits to offset the costs incurred in providing care.

So rather than investing in women as agents of economic growth, we need to re-claim women’s and girls’ well-being as a fundamental end in itself, and ask ourselves not what women can do for development but what development can do for women. Feminists worldwide have made compelling calls for an alternative, gender-equitable vision – one in which the economy is shaped for people rather than people for the economy. This means an economy in which unpaid labour in the home and community is as visible and valued as work in the public and private sectors, and where work is equally shared between women and men.

So as we forge the future, we must persist in our efforts to push the boundaries of development thinking towards a greater appreciation of care as a central human need and thus a fundamental development concern. Care is the very foundation of human well-being and the centre of human life; it should be at the very heart of what ‘development’ is all about.