Home > Militarism, Violence & Conflict > Mexico: the war on drugs is becoming a war on women

Mexico: the war on drugs is becoming a war on women 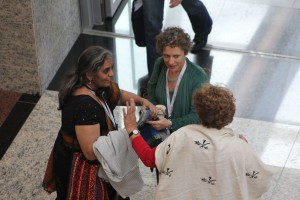 Some women had to be escorted into the city by court-appointed guards.

Others flew in from virtual war zones where they check twitter to find out when it’s safe to leave the house.

Many spend their days searching for kidnapped relatives or friends, or seeking justice as the last act of caring for a murdered child.

Almost all live with fear and sorrow as constant companions.

It wasn’t easy to organise the International Dialogue on Violence Against Women in Mexico City earlier this year. To bring in seventy women from all over the country to tell their stories implied significant risks and sacrifices. The event, organised by the Nobel Women’s Initiative and Just Associates, proved an historic opportunity to share experiences and analyse the crisis in Mexico and its impact on women.

“Mexico has been converted into a sea of blood and tears,” concluded Maria Elena Herrera, through her own tears. She’s lost four sons who were forcibly disappeared over the past few years. With daily headlines featuring assassinations, kidnappings and mass graves, many people–even beyond those directly affected—have come to agree.

Since President Felipe Calderón launched the war on drugs Dec. 11, 2006, the death toll from drug-related violence soared from around 2,000 a year, to 2010’s toll of more than 15,000 and 12,000 in 2011. This, after sending out more than 45,000 soldiers into streets throughout the nation. Today drug cartels fight rival drug cartels, security forces fight the cartels, rampant complicity and corruption blur the lines between the two, and caught in the middle, is Mexican society.

“War on drugs is becoming a war on women”

Nobel Laureate Jody Williams listened intently to the testimonies of the Mexican women, alongside twenty delegates from the United States and Canada. After concluding a ten-day fact-finding mission in Mexico and Central America, she stated, “The war on drugs and increased militarization in Mexico, Honduras and Guatemala is becoming a war on women. The governments’ efforts to improve ‘security’ in the region have directly resulted in insecurity for civilian populations—and most especially, for women.”

Blanca Martínez, director of the Juan de Larios Human Rights Center that works with cases of forced disappearance in the northern Mexican state of Coahuila put it even more bluntly. “This war was declared by Felipe Calderon in 2006 totally outside the constitutional framework and like any war the goal is to eliminate enemies however you can, but here the victims are usually from civil society– a society that has been left unprotected.”

Conflicts like Mexico’s pose new questions for people concerned with femicide and sexual violence in armed conflict, like those who attended the Mexico City forum. Understanding this new kind of conflict and its impact on women is a major theme for discussion on “Militarism, Violence and Conflict”, at the AWID Forum that takes place in Istanbul April 19th -22nd

The drug war is armed, it is a certainly a conflict–in Mexico it takes far more lives than most conventional wars–and yet it is unrecognized or even denied by governments and misrepresented or censored in the press. The opposing sides do not wear different-colored uniforms or fight on battlefields and many international conventions do not easily apply.

Most people killed in the drug war are men. However, women human rights defenders are increasingly targeted, often times by government forces since drug war violence and militarization provides a cover for attacking leaders of grassroots movements. One woman human rights defender told how she was beaten and raped by police last year. “My life has been marked by a ‘before’ and ‘after’ and my only crime was to work with indigenous communities.”

Women bear the burnt of the social consequences of the drug war–seeking justice for dead and missing family members, trying to keep children safe, making new homes when displaced by conflict and dealing with dismembered communities. They also suffer forms of sexual violence at the hands of both drug cartels and security forces.

According to Alma Gomez of the Center for the Human Rights of Women in Chihuahua, “Women are the invisible victims, we are always at risk in this military and police occupation. We know of gang rapes by security forces that the women don’t even report; arbitrary arrests; women who make the rounds between army barracks and city morgues searching for their sons, fathers, or husbands. We are the spoils of war in a war we didn’t ask for and we don’t want.”

The drug war is posited as the solution to the growth of organized crime. Martha Ojeda of the Coalition for Justice in the Maquiladoras on the northern border noted that the social roots of the conflict are often ignored. “The northern border state of Tamaulipas is part of the ‘NAFTA corridor’ (a north-south highway system to facilitate trade under the North American Free Trade Agreement). There’s unemployment and hunger. A woman can make more money as an informant than working full-time in a factory and sometimes there’s no other way to survive, there are no alternatives.” She described what has happened as drug cartels fight to control trafficking routes to the U.S. “Women’s bodies form part of the battle for control over territory.”

While most participants cited the security strategy itself as the cause of the explosion of violence that Mexico has seen over the past five years, another frequent explanation is the self-feeding cycle of violence and impunity. The Mexican legal system successfully prosecutes and imprisons perpetrators in only 2 percent of crimes committed. As it has become saturated with violent crime and further corrupted by competing cartels, its prosecution rate has fallen in many places and nationwide fewer people report crimes because their faith in the authorities is so low.

One participant noted a wave of assassinations, kidnappings, disappearances, human trafficking, rape and other crimes in the country. “Why in Mexico?”, she asked rhetorically. Then she answered her own question: “Because they can get away with it.”

Several of the women who spoke at the forum are the daughters or other relatives of persons disappeared during the dirty war of the seventies when the government went after opposition political leaders and insurgents. Maria de Vecci of HIJOS, noted that the effect of never bringing those crimes to justice can be felt today. “The ones who repress today not only learned from the past, but in many cases are the same individuals. Impunity for past crimes is a blank check to continue State terrorism.”

The lack of justice in the country has meant that some cases are sent to the international system. Valentina Rosendo, an M’Phaa indigenous woman who was raped by soldiers in 2002 and whose case went up to the Inter-American Court of Human Rights, pointed out the cost of militarization and the impact of racism in Mexico. “There are many cases of rape by soldiers and some of them are never reported. There’s double discrimination from authorities for being a woman and indigenous. A lot of women don’t report out of fear, shame or rejection from their families and the community.”

She added, “My case has been heard in countries all over the world. This helps me keep fighting and helps so it won’t be repeated.”

Her words stood as a reminder of the value of speaking out–even when it has high personal costs. The forum provided a safe space for that and served to forge the kind of international links that can protect women human rights defenders and prevent new threats.

In complex and dangerous situations like the Mexican conflict, for many women that can mean the difference between life and death.