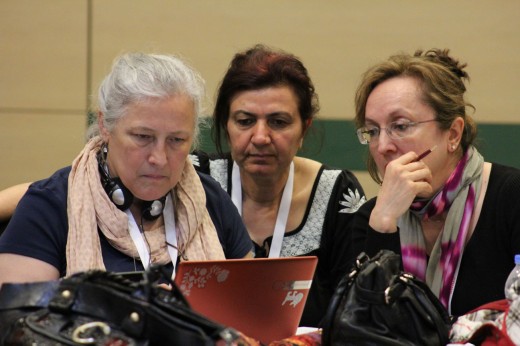 Plenary session two of the 2012 AWID Forum built on the first day’s momentum by making the links between key current trends and their implications for women’s economic power and made some proposals for transformation.

Starting with an analysis of indicators of development, Rebeca Grynspan and Marilyn Waring highlighted the inadequacy of solely focusing on economic growth as a way to measure development. In many countries, economic growth has actually exacerbated inequality. Rebeca Grynspan explored time poverty as a particularly important issue for women and not captured by standard poverty measurements. Other troubling trends Marilyn Waring exposed include the commodification of unpaid labour and the environment. What she called the ‘testosterone – mine is bigger and better than yours’ approach to finding alternatives (such as the OECD wellbeing indicators) has many of the same problems as GDP as a measure of development.

Amina Mama explored the ‘perils and profits’ of militarism as another key part of the current context. While war has led to devastating losses of life (over 100 million in the 20th century) and huge spending (the military budget of U.S. runs to trillions of dollars); many less visible factors affect women as a direct or indirect consequence of militarization. There is an inverse relationship between military and social spending and this impacts on women’s care burden. Militarization also encourages huge informal economies on a global sale, such as the trafficking of arms or minerals such as diamonds, which creates greater insecurity at the local level, especially for women.

Yakin Erturk highlighted the counterforces that have affected the momentum towards human rights that characterized the 1990s. ‘Culture’ is used to deny women their rights, as does prioritizing civil and political rights over economic, social and cultural rights. She indicated that power is changing hands among men representing alternative patriarchal agendas. Culturalizing women’s rights has delinked the problem from unequal gender structures, and delinked from the wider political and economic environment. But the good news is that feminists have reacted in constructive ways. There are many successful campaigns where women have used alternative interpretations of cultures, such as the Musawah movement and Global Campaign to Stop Killing and Stoning.

Che Yoke Ling took up the issue of climate change and described the situation of our planet as vicious and dehumanizing, especially for indigenous women. She said that the last 20 years has been about broken promises and unfulfilled obligations. While the climate the instruments for combating climate change are still valid there has been a systematic attack on these and legal agreements are being dismantled. Kyoto protocol is in intensive care—almost dead.

All the speakers recognized the ongoing work by feminists in proposing alternatives. Rebecca Grynspan said that by integrating paid and unpaid work in one indicator it would be possible to quantify time poverty and use this information to advocate for changes in government policy that negatively affect women. In many parts of the world, communities are already developing their own indicators for wellbeing including indigenous women as Victoria Taula Corpuz highlighted.

For Chee Yoke-Ling, the vicious and dehumanising current context calls for a return to the principles of equity that were at the heart of the environmental agreements of the 1992 Earth Summit in Rio saying that we have no choice but to do the transformation using a fair and equitable human rights approach, in and between countries

Both Victoria Taula Corpuz and Boaventura de Sousa Santos called for greater solidarity between social movements. Victoria Taula Corpuz highlighted the need for all of us to reclaim our indigenous and feminist ancestry and to use the existing human rights instruments in our ongoing struggles.
For Boaventura de Sousa Santos we need to ask whether now is the time to abandon the paradigm of development and move instead towards self-determination. He called for an ecology of knowledge and a greater articulation between diverse social movements and an end to the belief that our prejudices protect us.