Home > Plenary 3 > Disobedience of the prescriptions of capitalism

Disobedience of the prescriptions of capitalism 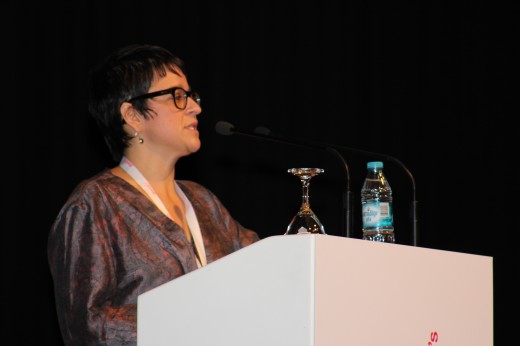 Following a packed gathering in the Binbirdirek Cistern that had participants singing and dancing well into the night, the third morning of the 2012 AWID Forum opened with poet Marwa Sharafeldin and six speakers highlighting the sounds and strategies of resistance. Across the stories they told, a common theme was disobedience of the prescriptions of capitalism. Under these prescriptions, the economic ceasefire – or compliance – called for in neoliberal policies has asked women to blindly accept austerity and corruption, devalue their own work, hide and apologize for their bodies and forego their rights in favor of the ‘larger social good.’

Narrating the journey of bringing 1.5 million domestic workers together in India, Lissy Joseph highlighted the connection between consciousness-raising at individual and community levels and global interventions, including ILO Convention 189 supporting decent work for domestic workers. Worldwide, 82% of domestic workers are women, many of whom are migrants. Today, in spite of pressures against unions, the International Trade Union Confederation has launched the 12 by 12 Campaign, pushing for twelve countries with high numbers of exploited domestic workers to ratify Convention 189 by the end of 2012.
Following the deposition of Mubarak in Egypt, Manal Hassan of the Arab Techies Collective highlighted how “the public faces of the No to Military Trials for Civilians Campaign in Egypt were young women’s faces.” The campaign utilizes social media to aid awareness, research, advocacy and civil disobedience to expose and halt harassment, abuses and torture by the armed forces in power. Since February 2011 women have been asked to keep quiet, stay in their homes and forego their rights in the ‘transition to democracy.’ Moreover, women activists have been subjected to virginity tests, and women protestors have been called prostitutes. In response, women have asserted themselves publicly, painting graffiti with slogans and symbols of the revolution and suing the armed forces for rights violations.

In Latin America and worldwide, the women of Via Campesina have organized within peasant movements and indigenous peoples movements to push for internal equality, with respect not only to gender but a diverse range of identities, as a model for transformation more broadly. Among the forms of parity they pushed for was gender-sensitive language, noted Francisca Rodriguez, founder of ANAMURI in Chile. She emphasized that it was not just parity that was important but what was done with this parity. “No one gave us these spaces – we conquered them,” Rodriguez said – critical steps in gaining and asserting economic power that has enabled peasant women to move from their kitchens to negotiations with multinational corporations. Ultimately, in the quest for economic justice, “there is no socialism without feminism.”

Sharing experiences of supporting women’s organizing throughout Serbia, Zoe Gudovic pointed to the importance of directing monetary resources in just ways. She argued “economy and money can only empower women if it is put in social change rather than wars and weapons.” Nevertheless, “economic power is not about amassing money, it’s about dismantling capitalism and patriarchy,” Gudovic said. Facing a criminal, corrupt state and widespread militarism, racism and patriarchy, the Reconstruction Women’s Fund has supported women to examine and draw upon their experiences for transformation. This process acknowledges that women’s movements are not immune to capitalistic modes of power and that “communication, transparency, dialogue, action, passion – all are needed for change.”

Kaythi Win, founder of Top, a national sex workers HIV program in Myanmar, framed sex work as work and explained, “when a woman decides to engage in sex work, she is making a decision to empower herself economically.” An image in the background conveyed the double meaning of the slogan “my body is my business!” Win explained that while many assume that sex workers need to be rescued, they are not victims. She asked, “who pays whom?” and stated that sex workers live less in fear of clients than of state and anti-trafficking groups that raid and rescue them. These interventions limit sex workers’ choices and violate their rights. Asked by the moderator for a call for solidarity, Win remarked “nothing for us without us.”

Women with disabilities contribute in numerous ways to the economy, posited Ekaete Judith Umoh, a disability rights advocate from Nigeria. However, she said, they are limited in their employment opportunities due to social biases and lack of accessible workplaces. Even in women’s movements, Umoh remarked, groups of sisters are missing everywhere. She asked, “why should disability rob women of their gender?” Under capitalism, both are seen as deficits – yet another reason for activists within and across women’s rights movements and disability rights movements to work together.

The collective stories from today’s plenary showed that in women’s movements, our power comes from pulling a lot of different experiences together. As Marwa Sharafeldin warned proponents of the economic ceasefire, “let us then see you cower … under the surge of this woman power/So don’t get too comfortable/
I’m a revolutionary woman.”