Home > Culture & Religion > Culture versus Rights Dualism: a myth or a reality?

Culture versus Rights Dualism: a myth or a reality? 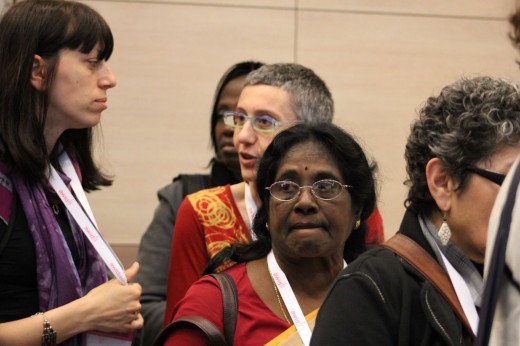 Women’s human rights discourse and movements have become entangled within a culture-versus-rights dualism. Yakin Ertürk argues that this is a false dualism which serves both private patriarchy and public patriarchy of neo-liberal globalisation

The 1990’s was a remarkable period in experiencing the unravelling of a world order that has characterised much of the twentieth century, and in revealing the contradictory tendencies towards and trends in the making of a new social contract between and within societies in the post cold war era.

This period witnessed a new awakening in human rights understanding as disempowered ordinary people around the world gained direct access to the international human rights system which offered a repertoire of normative standards for legitimate claim making beyond the national state.

Within this context, the global women’s movement is particularly noteworthy, as it has effectively seized the emerging global opportunities in making itself heard. The mobilisation driven by UN women’s conferences as well as the global conferences of the 1990s enabled women from the local to the global to bring their diverse concerns to the arena of international policy making and human rights advocacy. This engagement of women with transnational processes resulted in transforming conventional human rights theory and practice (as violations were perpetuated mainly by state actors in the public sphere), as well as in changing State doctrine to include positive responsibility.

Culture as the mediator of difference

However, these developments occurred parallel to the rise of counter forces that relied on culture and religion as the mediator of difference and the basis of identity politics. Universal human rights, particularly women’s human rights claims, became rejected on the grounds that these are alien concepts to “our culture”.  On the other hand, looking at the problem from the global north, the “other’s” culture had long become essentialised as the source of underdevelopment and women’s subordination in the non-western world.

Shortly after the Fourth World Conference on Women in Beijing, the biggest international gathering ever, in 1996 the Taliban seized power in Afghanistan with a mission to cleanse the public space of women, presumably to “protect them from corrupt western” values, as well as from their local collaborators – i.e. liberal men. In 2001, the US army launched an attack on Afghanistan to “save” its women from the savagery of the Taliban.

While the Afghan case constitutes an unfinished battle, and may be considered an extreme example of how women are instrumentalised in what I have called the clash of alternative masculinities, it can be argued that today’s “culture” wars are generally fought around the symbolism of women’s public sphere representation. Consequently, debates over women’s rights have become entangled within culture-based discourses, fragmenting the women’s human rights movement and posing a major challenge for feminists as well as the human rights paradigm, policy and praxis.

The Arab spring once more raises the culture / rights dualism as the pre-existing State feminisms, promoted by authoritarian governments, are being replaced by conservative agendas of Islamist parties.

Will there be a totalitarian transgression on the women’s rights achieved under authoritarian State feminisms? Will international commitments of former regimes, such as CEDAW, be abandoned?  Can the Arab spring deliver the democratic aspirations of the people without accommodating women’s demands? These and many more questions regarding the transitions in the region await answers.

What is clear, however, as in the Afghan case, is that power is changing hands among men representing alternative patriarchal agendas with culture and religion at the center of the politics of identity, particularly of women.

Culturalising the problem of women’s rights diverts attention from the unequal gendered structures, as well as from the wider economic and political environment in which these developments are taking place.

According to Merry, “Blaming culture for the disadvantages faced by women, minorities, and other vulnerable groups is an appealing ideology for proponents of contemporary neoliberal globalisation. It blames the havoc wreaked by expansive capitalism and global conflicts on the culture of the other”.

The good news is, women have not passively submitted to such encroachments. Individually and collectively they have always negotiated hegemonic value. In confronting the culture of domination they have organised and redefined culture and religion to promote women’s rights (Musawah and the Violence is not Our Culture Campaign are just two examples from the Muslim world).

On the other hand, the international human rights framework which women rely on in holding their respective governments accountable to their international commitments, remains abstract, legalistic and distant to women’s lives.

Furthermore, the hierarchical treatment of rights in the human rights system which privileges civil and political rights over economic, social and cultural rights, reinforces neoliberal globalisation.

Feminist scholars for long have criticised the conception of economic, social and cultural rights largely as ‘aspirational’ rights that can be progressively realised depending on the resources available to a state, in contrast with civil and political rights conceived as ‘obligatory’ rights to be guaranteed immediately. They have argued that the fulfillment of the latter can also be seen as a process of progressive realisation as Twin Covenants both impose positive duties on governments to comply with their obligations without discrimination.

A political economy perspective makes explicit the interconnections between the economic, social and political realms, and demonstrates that power operates not only through coercion, but also through the structured relations of production and reproduction that govern the distribution and use of resources, benefits, privileges and authority within and outside the home.

It also highlights the importance of economic and social rights and entitlements in enhancing women’s capabilities, and in creating conditions for women to enjoy the full range of their rights.

How do we move ahead given the fragmentations posed by identity politics, the distance and hierarchy of rights, and the backlash provoked by the advances women have made in expanding their space? There is need to respond to these challenges by both feminist theorising and activism. First, we need to bear in mind that cultures, including the human rights culture, are contested sites; therefore, we need to continue to adopt transformative strategies to negotiate and change discriminatory values and practices – whether in the name of culture or in the name of universal human rights norms.

At a paradigm level, we need to re-visit the women in development discourse, and reconcile it with the human rights discourse, in order to build on lessons learned from each towards an integrated holistic paradigm of women’s rights.

At a conceptual level, feminist scholars and activists alike would need to join forces to bridge the gap between the abstract/distant human rights standards, and the realities of women on the ground, by developing intermediary and contextualised analytical and practical tools. Nussbaum’s concept of capabilities is a good example in this direction.

At a policy level, I argue with Bandana Purkayastha that women need to bring their concerns to the institutional tables in order to effect real change. In this regard, more analysts need to be policy implementers, and others need to find ways to make sure their analysis is heard and implemented by the policy-makers

At a practical level, there is need for developing strategic alliances with other progressive movements, and for promoting the organising of women’s work through innovative modalities. Cooperative types of approaches, which have fallen out of fashion in the neoliberal era, are being revitalised by women’s groups at the grass roots levels (the initiative of the Turkish NGO, “Foundation for the Support of Women’s Work” is one such example).

These will require strategic engagement with the international human rights framework in order to transform the human rights culture, and to ensure that governments comply with their international commitments. With respect to the former, it is important to strategise beyond CEDAW, which women now use effectively. In this regard, the committees monitoring the Twin Covenants are particularly important in challenging the hierarchy and fragmentation of rights. Women’s rights will remain aspirational if women are not empowered through access to housing, land, credit, income and authority.

This article is based on a presentation by the author at the AWID Forum 2012, April 19-22, Istanbul.