Posted in Plenary 3, The Role of the State on October 29th, 2012 by AWID Staff
Source: Open Democracy 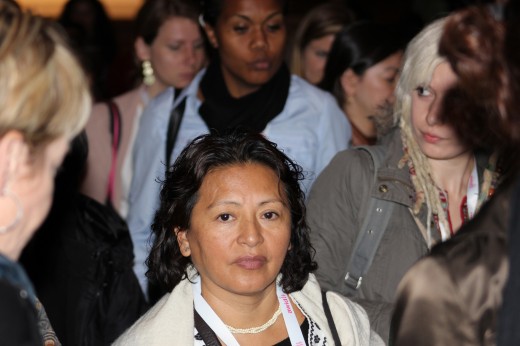 How far can the flourishing “participatory state feminism” in Brazil expand into the state apparatus in order to counter the absence of women in decision making positions and redefine women’s place in society?

Feminist activism in Brazil has stretched the very concept of democracy by including women’s rights in the process of re-democratization of the country. It has articulated a more participatory form of state feminism, and it has expanded and diversified to the extent that is best to always speak of feminisms in Brazil in the plural. Brazilian feminisms have made important contributions towards re-defining women’s place in society and in building a more gender equitable society. They have been instrumental in drawing up new legislation promoting gender equity and in the formulation of public policies for women, carving new spaces in state machineries to implement and monitor them.

Despite these significant gains for women in Brazil – and in spite of a pledge by those in power to implement “gender mainstreaming” in all spheres and levels – major changes in that direction have yet to be enacted in the legislative, judiciary and executive branches. Permeated by a patriarchal political culture, they have remained notoriously resistant to the inclusion of women. This has resulted in a major paradox for Brazilian feminists: on the one hand, the presence of a wide and well articulated women’s movement, and on the other, a notorious absence of women in decision making positions, in spite of having a woman  –  Dilma Rousseff –  as President of the country.

As a consequence of this paradox, “state feminism” has expanded significantly in Brazil, particularly over the last decade. A “participative” form of state feminism is at work: not only has it flourished from the demands of feminist and women’s movements, but also formulates its policies for women – at least at the federal level – on a more participatory basis. This has been especially evident in the three national conferences of public policies for women (2004, 2007, 2011), promoted by the federal administration, a process that each time has involved more than 300,000 women all over the country.

These conferences were inspired in the 2002 Conference of Brazilian Women, attended by over 1000 women who came together to draw up the Plataforma Política Feminista Feminist Political Platform, presented to all candidates in the presidential elections. This platform voiced feminist perspectives on issues of general interest, and proposed the construction of a more equitable society on the basis of the principles of a non-racist, non-homophobic, and anti-capitalist feminism.

President Luis Inácio Lula da Silva’s government established 2004 as Women’s Year through federal law, and the Special Secretariat of Public Policies for Women, a cabinet-level position created by the Lula government, organized the First National Conference on Policies for Women. Elected by their peers in the state conferences held all over the country, nearly 2,000 women delegates assembled in Brasília in July 2004. The stated purpose of this nationwide process was to establish a dialogue between civil society and government—from the municipal through the federal levels—for the formulation of the First National Plan of Public Policies for Women, toward the eradication of gender inequalities in Brazil.

Feminist activists of all walks and faiths participated in this process, conscious that it could revitalize the feminist movement as an “actor in the national political scene.” However, feminists were aware of the risk of being used “for a merely illustrative participation”, and sought to intervene in the municipal and state preparatory conferences, so as to guarantee the largest possible number of delegates who identified as feminists.  This strategy paid off: it was approved in the First Conference the “feminist position that affirms the responsibility of the State over the financing, formulation, and implementation of public  policies for women, and the articulation between social and economic policies”.

A second conference held in 2007 once again brought together more than 2,000 delegates from all over the country, this time to evaluate the First National Plan on  Public Policies for Women and suggest needed adjustments. The conference report recognized and reaffirmed important achievements, including the launching of the Pact Against Violence Against Women and the passage of comprehensive legislation to combat domestic violence.  The demand for the legalisation of abortion was also reaffirmed by a wide margin. Furthermore, feminists were successful in guaranteeing the inclusion of the principle that “to widen women’s participation in power and decision-making spheres is to work for the consolidation and perfection of Brazilian democracy”. This principle has fostered the creation of government machinery at the municipal and state levels to oversee the implementation of the policies in question, including the implementation of councils for the defense of women’s rights, formed by representatives of civil society.

Without greater representation in the upper echelons of the legislative, judiciary, and executive systems, “participative” state feminism has thus made it possible for feminists to take a greater part in the formulation and monitoring of public policies that respond to women’s demands in building a more equitable society.  But, of course, this does not mean that participative state feminism has obviated the tensions between feminist and women’s movements and the state, nor that feminisms are free from state “co-option”.

According to Shahra Razavi the expansion of “state feminism” may be seen as resulting from blockages to women’s participation through more traditional processes (party politics, for instance). In these circumstances, one strategy “is to enter and work directly through the state bureaucracy.” For Razavi, therefore, “State feminism, as it is more widely known, is essentially a post-liberal democratic solution and one possible institutional channel for giving voice to women”. She further observes, however, that state machineries alone cannot be expected to bring significant policy changes without the building of feminist constituencies to support them. At the same time, she argues, “state feminism” tends to de-politicize women’s movements, thus cutting short its very basis of support.

However, in Brazil, state feminism is not imposed from the top. On the contrary, it is a response to pressures from the feminist and wider women’s movement. It has become more “participatory” within the past decade, by means of councils and conferences, from the local to the national levels. They have played an important part in the formulation and monitoring of public policies for women. The new decision-making positions in the state machineries that are being created, particularly at the federal level, are being occupied by women who are feminists: they are the ones pushing forth, advancing the National Plan of Public Policies for Women.

The success of the present Special Secretariat for Women’s Policies lies in its recognition of the importance of the feminist movement for the formulation and implementation of public policies that will make a difference in women’s lives. As such, thus far, “participatory state feminism” has brought a new energy to feminisms in Brazil, providing the means for more participatory channels for the formulation, implementation, and monitoring of public policies for women. For feminism, it is not enough to have a state mechanism; it is necessary to have people committed to feminist causes advancing the issues at hand, as well as a more participatory form of governance. Thus, feminist organizations and women’s forums monitor the actions of those in power and give or withhold their support. This means that if feminisms in Brazil are to continue expanding into the state apparatus, rather than allowing the state to control the movement, building feminist constituencies will continue to be a fundamental challenge for feminisms in the decades to come.